By Eric Oliver, Milwaukee Neighborhood News Service - Jun 6th, 2013 11:56 am
Get a daily rundown of the top stories on Urban Milwaukee 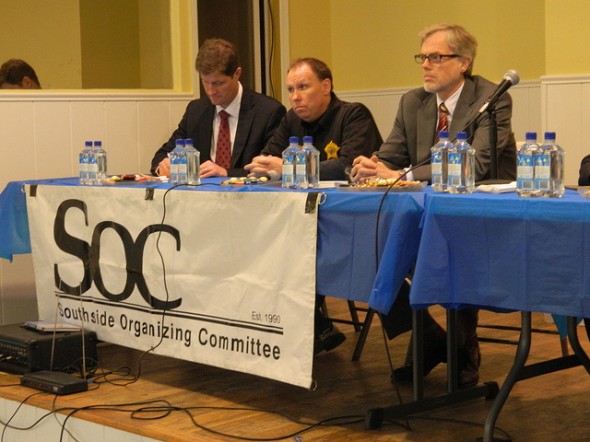 South Side residents who attended a recent public safety meeting learned that the Milwaukee Police Department is going to increase foot and squad car patrols to help combat summer crime.

“You are going to see a lot of us this summer,” said Lt. Richard Stein of the Milwaukee Police Department at the meeting sponsored by the Southside Organizing Committee (SOC).

MPD statistics show crime in the district typically increases in the summer. (See graphic, below.)

Most community members who spoke at the meeting directed their comments to police officials. They asked for an increased police presence on side streets and a greater focus on community-based information gathering. 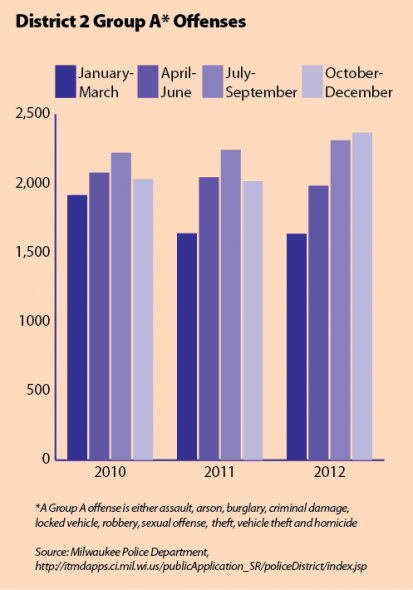 Attendees had a short list of grievances, many of them centering on vandalism and small property damage. Some said that they felt calls concerning vandalism to automobiles or property were ignored or not taken seriously.

According to Stein, the department prioritizes calls based on whether there is a potential risk of physical violence. For example, vandalism takes lower priority than abuse.

“We do want to be there and we will be there as soon as we can,” he said.

Cleereman urged citizens to check the progress of cases that they reported and to log everything they discuss over the phone with officers. He noted that the most successful way to prevent crime is to implement a neighborhood watch.

Kremers said that the court system is working to reduce the amount of time officers are in courtrooms, so they can spend more time on the street, adding that he always hears a mix of praise and complaints for the police department at community meetings.

SOC Executive Director Steve Fendt pointed out that the meeting was not only for the community; it was also for the public officials.

“We want the 2nd District police officers to remember these faces, the concerns they hear, before the next time they put on the uniform and go out to patrol,” Fendt said. “To best serve the community, they have to be in touch with the community.”