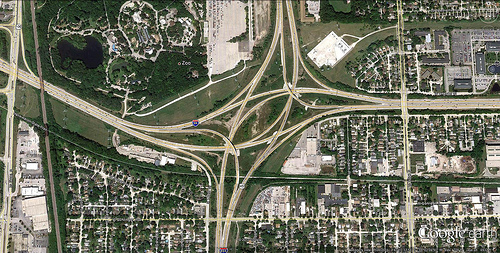 It is just an interim ruling, but it is potentially an important one:  In a suit brought by inner-city, minority plaintiffs, the US District Court in Milwaukee has indicated that the Federal Highway Administration (FHWA) and Wisconsin Department of Transportation (WisDOT) cannot enlarge a major urban freeway connection without further study of the project’s impacts on transit-dependent populations and on regional suburban sprawl.  For now, the case is headed to mediation; but the court’s ruling on legal issues in the case, as articulated in an opinion signed by federal judge Lynn Adelman, is potentially significant to other highway-expansion controversies with similar circumstances.

First, the court found that, before going forward with plans for construction, the agencies must first study the impact of “continuing to expand highway capacity in the region while transit capacity declines.”  Second, the agencies also must examine the potential regional effects of highway expansion on suburban sprawl.  The court rejected the agencies’ argument that they need only study the impacts in the specific area where the highway expansion was taking place, finding that it would defeat the “action-forcing” intent of the National Environmental Policy Act (NEPA) if a piecemeal approach to highway projects and analysis allowed cumulative regional impacts to escape scrutiny. The project in question would rebuild highways leading to and from a major freeway interchange west of downtown Milwaukee (the intersection of Interstates 94 and 894 with US route 45, called “the Zoo Interchange” because of its proximity to Milwaukee’s public zoo), as well as the interchange itself.  In particular, FHWA and WisDOT seek to expand road capacity from six to eight lanes in one direction and, in the other, to install extra-wide shoulders that could potentially be used for additional capacity in the future.  Four interchange ramps would be doubled in size, and surface streets would also be modified to accommodate the new configuration.  The $1.7 billion construction undertaking, stretching 5.5 miles north-south, and 3.5 miles east-west, is said to be the largest single transportation project in Wisconsin history.

The suit was brought by Milwaukee Inner-City Congregations Allied for Hope and the Black Health Coalition of Wisconsin.  The two organizations argued that the highway expansion plan failed to include any public transportation, would impair air quality, and would contribute to suburban sprawl.  NEPA requires that major federal projects await full study of their potential impacts and alternative courses of action before going forward.  The court’s ruling, issued last month, came in response to the plaintiffs’ request for a preliminary injunction stopping work on the project until the required analysis is completed.

The plaintiffs did not challenge the reconstruction and safety redesign of the Zoo Interchange, but only its capacity-expanding elements.  They argued that NEPA’s mandate that the agencies prepare a thorough Environmental Impact Statement on the project required FHWA and WisDOT to do more to discuss the potential cumulative impacts of highway expansion when viewed together with other highway projects in the vicinity and with a decline in transit service.  (Contrary to recent experience, the EIS assumed that transit would expand, not decline, because expansion had been recommended in a nonbinding recommendation of the region’s metropolitan planning organization.)

The court agreed with the plaintiffs.  The entire opinion is worth reading, but here are some excerpts, starting with the agencies’ assumptions regarding transit:

“[The agencies] have an obligation to acknowledge that the transit components of the Year 2035 plan are not being implemented and to identify the environmental harms that might materialize if transit continues to languish but the agencies continue to expand highway capacity in the region.  Of course, even after the agencies identify those harms, the responsible decisionmakers will remain free to prioritize highway expansion over transit expansion, but at least the decision to do so will have been based on a full consideration of the environmental costs.” [Citations omitted.]

The court elaborated that the agencies have a duty to examine the effects of this pattern on the transit-dependent population:

“They must examine the potential social and economic impact on the transit-dependent of continuing to expand highway capacity in the region while transit capacity declines.  If after conducting this examination the agencies determine that their continuing to expand highway capacity while transit capacity declines will have negative effects, the agencies must consider identifying and assessing an alternative to the project that might avoid, minimize, or mitigate those negative effects.

Such an alternative might include incorporating some form of transit into the project, such as rapid bus service between the City of Milwaukee and Waukesha County.  Such bus service might offset the social and economic harm to inner city communities that might result if the continued expansion of highway capacity facilitates the movement of jobs and other services away from those in the inner city who do not have access to automobiles.”  [Citations omitted.]

Later in the opinion, the court was emphatic that the agencies must look at the effects of the highway-first transportation practices on the metropolitan region, and specifically at the possibility that highway expansion enables suburban sprawl.  It is not sufficient to examine only the part of the city where the Zoo Interchange is located: “[T]he EIS contains no discussion of the potential sprawl-inducing effect of highway construction on the region as a whole.  Milwaukee traffic (by: modernowl, creative commons)Indeed, it appears that no one has studied the overall environmental effect on the region of implementing all of the highway-expansion projects in SEWRPC’s 2035 plan.  Rather, it seems that the agencies which implement specific projects study only the effects that could be expected to occur in the immediate vicinity of the project under consideration.

“By proceeding in this fashion, the agencies run the risk of overlooking an environmental effect that emerges on the regional level.  For example, in the present case, by focusing solely on natural resources in the immediate vicinity of the Zoo Interchange, the agencies may overlook the fact that by facilitating automobile travel to suburban areas (i.e., by facilitating suburban sprawl), the Zoo Interchange project and other highway projects may be contributing to the destruction of natural resources in various other parts of the region.”

“Again, the Zoo Interchange project by itself might not have an appreciable effect on the region as a whole, but when that project is combined with SEWRPC’s other recommended highway projects, a regional environmental impact may emerge.”

The court is essentially admonishing the agencies for their failure to examine fully the impacts of the road-building contemplated in the regional plan back when the plan was written.  Since the issue was not sufficiently addressed then, it must be addressed now.

While I agree with the court’s reasoning, the facts of this case illustrate just what a mess our multi-jurisdiction, multi-agency metropolitan regions are when it comes to issues of governance that affect a region as a whole.  FHWA and WisDOT are not themselves responsible for the provision of transit service, so they made assumptions (self-serving and contrary to experience) about what transit service would be provided.  The metropolitan planning organization makes general long-range planning recommendations, but it does not implement them; accordingly, some portions get implemented and others are ignored.  No agency seems to believe it is responsible for studying the regional impacts of cumulative transportation actions.

These problems are ubiquitous across the country, though planning law in California is at least moving in the right direction when it comes to making transportation and land use planning both coordinated and meaningful.  Portland has an elected regional government responsible for land use and transportation.  But Milwaukee’s situation is far more common:  one agency does this, another does that, and they all plead helplessness when it comes to the big picture.

Kudos to the court for stepping in and ensuring that someone follow the law and common-sense practice in cases like this.  If not settled in mediation, the case is far from over, since there remains an evidentiary hearing on the motion for preliminary injunction and then at least two more rulings by the district court, after which there is always the possibility of appeal.  Meanwhile, court-supervised mediation is scheduled to begin on June 13.  Read the opinion here.