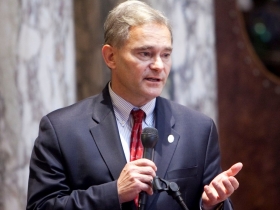 Marquette Law School pollsters haven’t asked the question in more than a year: Do you have a favorable or unfavorable opinion of Assembly Democratic Leader Peter Barca of Kenosha?

In the February 2012 Marquette poll, here was the answer: 12 percent favorable, 12 percent unfavorable and 70 percent had “not heard enough” about Barca. The rest refused to answer or had no opinion.

Yet some Capitol Democrats are looking to Barca to be the Democratic nominee against Republican Gov. Scott Walker next year.

“Barca—that’s what I’m hearing,” said one veteran Madison Democrat, who didn’t want his name used because he doesn’t want Barca to be the nominee but also didn’t want to seem disloyal.

Barca is an “old” candidate, the Madison Democrat added. “Where are all the Democratic Party’s ‘young guns’?”

Although the election is 17 months away, Barca is “my candidate,” said Democratic Sen. Fred Risser of Madison. “But he’s like everybody else who has thought about running—afraid of the money.”

“The money” is a reference to Walker’s popularity with wealthy GOP conservatives who write big checks to his campaign and third-party groups expected to spend lavishly to keep him in office.

For example, Walker raised a staggering $48 million in about three years—$11 million to win the 2010 election for governor and $37 million in the 2011-12 run-up to win the recall election, according to the Wisconsin Democracy Campaign. He is the first governor in U.S. history to survive a recall vote.

Walker makes all Republicans’ lists of potential 2016 presidential candidates because of his 2011 successful push for Act 10, which erased almost all collective bargaining laws for public employees, except for police officers and firefighters, and surviving the recall.

If you’re one of the 70 percent who greet his name with “Barca—who?” he has an interesting political resume.

Barca, 57, was an angry and symbolic leader of opposition to Act 10 in the winter of 2011. He often led huge rallies against Walker. When all 14 Senate Democrats fled to Illinois to delay Act 10, Barca was the top Democrat left in the Capitol.

In their book “More Than They Bargained For,” reporters Jason Stein and Patrick Marley documented Barca’s warning to Walker about Act 10:

“When Barca countered that Walker had not mentioned a word of such a radical proposal during his campaign, the governor took exception, saying he had talked on the campaign trail about being bold and cutting employees’ benefits.

“But Barca, who grew up just outside a city with a strong union presence, was unmoved. ‘You’re making a huge mistake, and this is going to be met with massive resistance,’ the Democrat said.”

“Barca grew up the son of an Italian immigrant in the shadow of Kenosha’s American Motors plant, and Barca knew how important unions had been for generations in their manufacturing-dependent state.”

But if labor unions unite behind a Barca candidacy, Walker will use that as the chief reason why the Democrat should not be elected.

Barca is serving his second Assembly stint. He was first elected in 1984 and served until he was elected to the U.S. House in 1993, taking the seat that had been held by Democrat Les Aspin, who President Bill Clinton appointed U.S. secretary of defense.

After losing to Republican Mark Neumann in 1994, Barca got a Small Business Administration appointment. He was elected to the Assembly in 2008.

Why would Barca run?

He could get promised enough cash to run a viable campaign. He appeals to anybody-but-Walker voters, a pool Marquette polls consistently put at about 45 percent. He’s also not from Milwaukee or Madison, the home of decades of Democratic candidates for governor.

Barca said other things have his attention—for now.

“Wisconsin is 44th in the nation in job creation and in the middle of a highly controversial budget,” he said in a statement, adding:

“Now is the not the time for state leaders to be running for governor or running for president. Now is the time for our focus to be on public education, quality health care and putting Wisconsin back to work. The people of Wisconsin need and deserve our full attention.”

3 thoughts on “Peter Barca for Governor?”