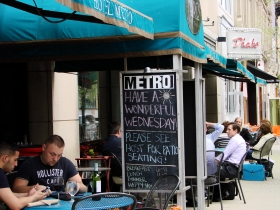 As James Hummert puts it, the building “spoke to him.”

It was more than 15 years ago that he walked through the abandoned but historic John W. Mariner Building, originally constructed in 1937 and designed by Eschweiler & Eschweiler. Hummert was enticed by his friends and members of the Ogden Development Group, Inc., John Ogden, Sr., Peter Ogden and John Ogden, Jr., along with John Wolter, to join them in restoring life back into a classic downtown building that once housed retail shops and offices. “It was a puzzle that seemed to make sense,” says Hummert.

Its prime location, high ceilings and Art Deco styled curves made the recycling of the building quite possible, Hummert felt. In July 1998, the building was completely overhauled and turned into a “boutique hotel that would serve as an ambassador for the community,” says Hummert. With its oval columns, curving lines and bright color palette, Hotel Metro and its ground-floor Metro restaurant and bar (411 E. Mason Street) have a unique sense of style.

The old building had been completely gutted, and everything was replaced except for the elevators, windows and lobby. The square columns were converted into ovals as part of a 9-month-long redesign project. The architects for the redesign are Uihlein Wilson (David Uihlein and Associates at the time) and Engberg Anderson, however “the real heart of the design came from a true sage in the Midwest, Madame Liane Kuony,” Hummert says.

Then 87, the Fond du Lac native was known primarily for her cooking, but had a strong passion for design. She founded The Postilion Restaurant and School of Culinary Arts in Fond du Lac and was the first American and first woman to be inducted into the European Chefs Association. 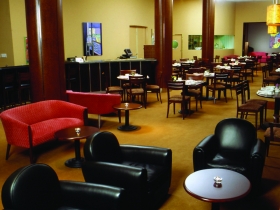 Kuony, whom Hummert calls a “master of color,” took charge of the entire project. While the exterior of the building is Art Deco—a popular style in the 1930’s—Kuony felt this was too aggressive and too cold for the hospitality industry. Therefore, a softer approach was taken. ”We determined it should be an Art Moderne root,” says Hummert, but reinterpreted in a style with less-aggressive geometrical shapes and softer, more organic forms. Each shape, color and smell in Hotel Metro was chosen to invoke certain emotions.

From the light fixtures to the carpets in the hallways, every material was judiciously handpicked and surveyed by Kuony. The carpets’ patterns took two months to create and the pigments another. The furniture and hardware were designed from scratch, and the materials used were as natural and “green” as possible. The ellipse-shaped lights and chandeliers provide a sense of movement, which can be felt with the oval columns as well.

According to Hummert, Madame Kuony would go all over to find products she wanted. They would start by going to the manufacturing plant where she would walk and talk to the workers. Then if she liked the workers, she would hunt down the plant’s manager. Next, she would insist on flying to the headquarters to negotiate and then the design center to specify her wants. Nothing was as simple as it looked.

“That’s how she worked” explains Hummert, “and that was for just one component of the furniture.” She would put in 12 hours a day and then insist on going dancing. “And we did this 6 days a week, 10 weeks in a row nonstop.” 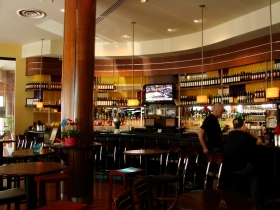 A view of the whole bar at Hotel Metro. Photo by Nastassia Putz.

That was how it all came to be…originally. But some 13 years later, in 2011, Hummert and Hanna Seegers from Mood Sweden Interior and Architecture, embarked on a redesign with the late Madame Kuony in mind. So like a phoenix, Café Metro was set ablaze and Metro, an urban supper club, was reborn from its ashes.

Seegers, who moved here a few years ago from Sweden and founded the business, worked closely with her partner Emily Hedenstedt, a Sweden native, to transform the wide-open space into smaller rooms that redefined the space for restaurant, lounge and bar. Adam Kirchner was the architect that executed their design throughout the end of 2011 and beginning of 2012.

“We wanted to pump it up a few notches to make it more modern and today,” says Seegers, “as well as create a better atmosphere for people to sit.”

They removed the lower seating and replaced it with high-top banquettes (or booths) made with stainless steel trim and added glass doors to the private dining area (or sidecar) for intimacy.

The whole place was then repainted with a bright purple and yellow, mimicking the colors of Zen on Seven, Hotel Metro’s rooftop bar. But the real fun came in with the two murals in the back painted by local artist, Brooklyn Henke. 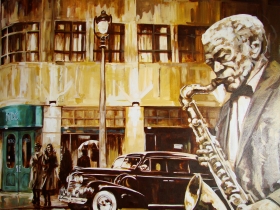 Together Henke, Seegers and Hummert’s wife, Tamara, collaborated to come up with the concept. The first one seen upon entering the restaurant is a representation of a younger Madame Kuony siting on the rooftop of Hotel Metro, enjoying a martini and looking out over Milwaukee’s skyline. The second mural is of a local jazz musician Berkeley Fudge. Henke will be adding another one in the future to Zen on Seven.

Kris Willis, general manager, who joined the Hotel Metro staff in September 2011, watched the redesign take place and was amazed by the transformation. She had just come aboard after meeting with Hummert and John Ogden Sr. in June and says it was their passion to recreate the place that drove her out of retirement and back into the working world. “It was in the forefront for Milwaukee Street,” says Willis, “and I believe it still is.”

It’s an upscale, hip, traditional, urban, historic, trendy lounge and restaurant, she says. The ‘green’ aspect also appeals to people and informs the style of both hotel and restaurant.

Hotel Metro is registered with the U.S. Green Building Council for Leadership in Energy and Environmental Design (LEED) and was the first hotel in Milwaukee to be certified by Travel Green Wisconsin. It offers, for instance, complimentary bicycles to guests and a Metro cab powered by soy certified biodiesel. The restaurant is also eco-friendly with recyclable, to-go containers and an interior made from recycled materials. 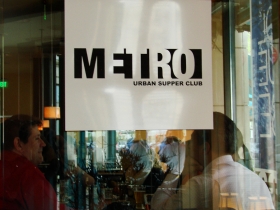 While the hotel entices mostly couples and travelers, according to Willis, the restaurant crowd is a bit more diverse. “It never sleeps.”

The patrons tend to be both hip and international. The restaurant appeals to a lot of bachelor and bachelorette parties, but also accommodates those staying in the hotel or working at local businesses, says Jaime Meinzer, restaurant manager, hired in November 2011. “We range from anyone to everyone.”

There is some confusion however, with the name. A lot of people seem to think the name of the restaurant is Hotel Metro, which is fine, according to Willis, but it’s really Metro.

It’s “an urban supper club,” says Hummert, with both the restaurant and adjoining bar capturing a style which is increasingly popular with customers who don’t want to leave a city’s rhythms behind when they walk through an establishment’s door. 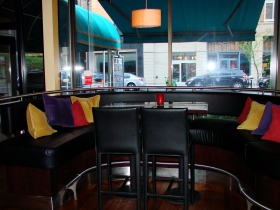 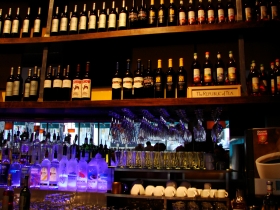 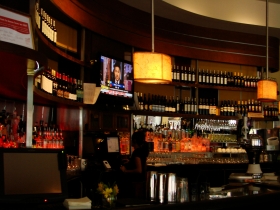 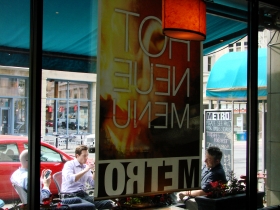 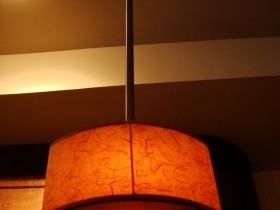