The Blackbird’s Kitschy Sense of Cool

The Bay View hangout has the feel of a cozy North Woods bar. 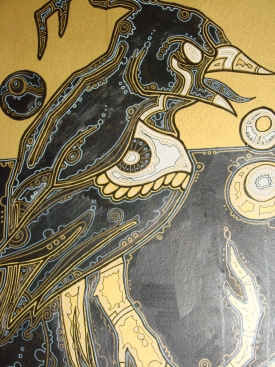 “We’ve lost pieces over the years,” says bartender Joey Houghtaling as he glances over the décor on the walls. Houghtaling remembers chasing someone down for trying to run off with the antique rotating Schlitz sign hanging in the middle of the bar. “People try to casually walk out with stuff,” he says looking annoyed.

Blackbird took flight in the former space of The Groove in November 2008, and quickly became a popular Bay View hangout. Doar and her previous business partner, Marisa Lange, owner of Classic Slice, bought it from Barry Lewis, proprietor of The Gig in Riverwest. Together they worked to transform it into a “cool dive bar,” as Doar puts it.

“I’ve created the bar that I would want to hang out in,” she says. Doar worked for Lewis in the past as a bartender at The Gig and was first in line to snag this prime location. Easy enough, right?

Then came the hard part. She had to learn about obtaining licenses and occupancy permits for the first time in her life, not to mention devoting untold hours to remodeling. “Many nights we were working until 2 a.m.,” notes Doar. 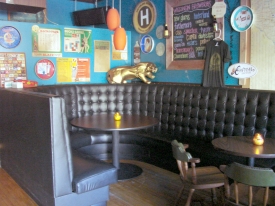 Booth in the Blackbird Bar. Photo by Nastassia Putz.

But with the help of friends and family they completed it in time for the night Barack Obama was first elected. “We held a huge election night party, and celebrated our grand opening.”

They added booths to the front and back, applied a fresh palette of colors, and have steadily developed a kitschy Wisconsin theme, one Doar now calls “Grandpa’s Basement.”

Doar grew up on a farm in Bloomington, Wisconsin and learned a lot watching her dad run the family farm. She eventually wanted something of her own and comparable to her roots. “I wanted a bar with a small town vibe in the city,” she says. “It’s a cozy, comfortable space with a lot of kitsch.” 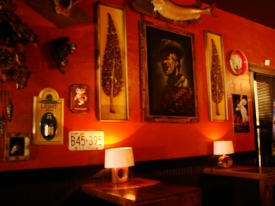 The interior of the Blackbird Bar. Photo by Nastassia Putz.

Almost every inch of wall in the Blackbird sports a knick-knack or antique of some kind. From vintage beer signs and deer antlers to old license plates and mounted fish, there is no shortage of conversation pieces.“We have collected the decor over time,” says Doar. “Garage sales, thrift stores, craigslist and antique shops.” The reddish orange lighting is notably dim and reminiscent of a burning fireplace on a brisk Wisconsin night. The bar a kind of woodsy, up north feel.

There are no darts or pool tables. Instead, the various pinball machines are fan favorites, as well as the vintage arcade game called Ice Cold Beer. People also seem to enjoy the photo booth. 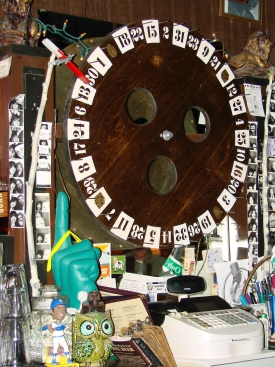 Another crowd pleaser is the Happy Hour wheel behind the bar. From 4 to 8 p.m. daily, if a patron buys a drink, he or she can pick a number while the bartender spins the wheel. Depending on where the wheel stops, they can win a shot, a drink, a pickled egg or a shake of the day. “It really adds a circusy, fun vibe,” says Doar.

After returning from a trip several months ago, Houghtaling noticed the new touch and said, “What is this? The Price is Right?”

The bar’s unofficial “smart ass,” Houghtaling is also an expert mixologist. In 2012, he was Milwaukee’s finalist in the United States Bartenders’ Guild’s Most Inspired Bartender competition sponsored by GQ Magazine and Bombay Sapphire in Las Vegas. He now travels around the country working at different cocktail conventions.

Wednesday nights are his nights at the Blackbird and “an escape from having to make fancier drinks,” he notes. The Blackbird is more of a corner bar with its emphasis on beers and shots. It features 80 plus local beers at all times, which Doar believes may compete with any Milwaukee County bar.

“Growing up on a Wisconsin farm, I understand how important it is to spend your cash on what your neighbor is growing,” she emphasizes. “We have some amazing breweries and distilleries in Wisconsin, so purchasing a majority of our inventory from local producers has proven to be extremely easy.” Blackbird features a local brewery every month with a public tasting.

Blackbird radiates a strong sense of pride in its neighborhood. According to Houghtaling, the typical crowd is a “mixed bag of nuts,” from ages 25 to 70-years-old.

“No pretention here,” says patron Paul Gosh, a confirmed Blackbirdian who has been coming here for two years. “It has Milwaukee charm.” He enjoys it all, from the beer selection to the paintings of birds in the back room.  Created by local artist Luke Chappelle and distinctively stylized, they offer a kind of hipster’s version of Wisconsin’s North Woods, not unlike the bar itself. 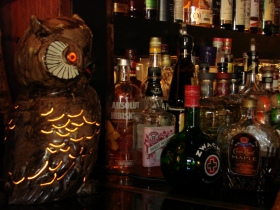 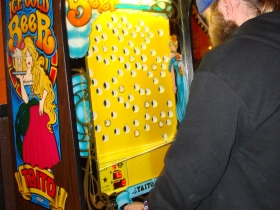 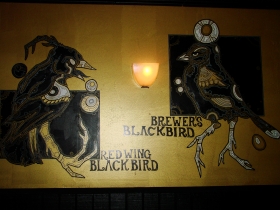 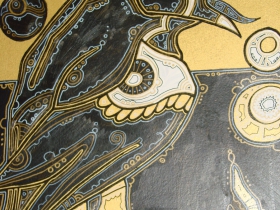 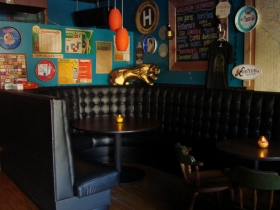 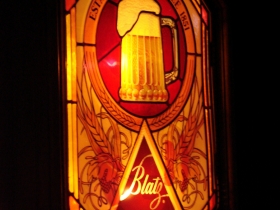