Bicyclists and motorists who break the laws defend themselves. Are they right?

By Dave Schlabowske, Bike Federation of Wisconsin - May 3rd, 2013 10:20 am
Get a daily rundown of the top stories on Urban Milwaukee 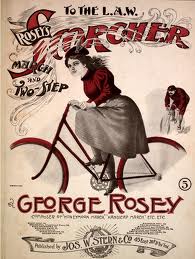 Proud to be a Scorcher and a Scofflaw

A couple days ago I wrote a follow-up to the Bike Fed’s Lobby Day efforts in which I discussed how we need to dispel the myth that people who ride bicycles break the law more frequently than people who drive motor vehicles. My primary argument was that people tend to break the laws they know they can get away with, whether in cars, on bikes or on foot.  I also pointed out that that based on the facts from traffic studies, people actually tend to be more law abiding when riding bicycles than when driving cars, but we have a perception problem that the opposite is true. I then argued that everyone would be safer if all road users would obey all traffic laws all the time.

Most of the online discussion took place on various Facebook pages where people shared the blog post rather than in the comments section. From that discussion, a few people offered a very different perspective from my own. A small, but unified minority of people actually said they disobey certain traffic laws intentionally. These arguments put forth by these proud scofflaws tended to fall into two camps:

I just read your piece on cyclist “scofflaws”, and as a long-time, avid recreational and commuting cyclist, I have to respectfully disagree with you. When I break the law — by treating stop signs as yield signs, and red lights as stop signs — I make myself safer by limiting the amount of time I am in the most vulnerable position I am likely to face as a cyclist, namely at a standstill with moving traffic around me.

As a cyclist (and as a driver), I treat right-of-way laws as sacred, and will never violate them. If I come to a stop sign and another car is approaching, then I stop and yield (if the driver has the right-of-way; if I have the right-of-way, I take it). It is only when other cars are not present that I break the laws. Even at a red light, if there is no cross traffic and I can safely dart across (or jump the changing green), I will do so, since the cars behind me are a largest source of danger to me, either turning right across me or veering into me when they begin to accelerate.

I believe your piece would have had more power had you taken a position with more nuance — that sometimes traffic laws that cyclists are expected to follow actually make them less safe — and focused instead on the importance of being good citizens of the road, by obeying right-of-way (for both drivers and pedestrians).

Finally, as a driver, I must also take exception to your saying that drivers should drive the speed limit (or slower). Doing so is often DANGEROUS, as it causes tailgating and reckless passing. Driving along with the “flow of traffic” — neither faster nor slower than the vast majority of other drivers — is actually the safest approach (with the possible exception of places like school zones).

Thanks for your time and attention. I hope you won’t be too angered or disappointed that your plea fell on deaf ears with me, but I am a proud scofflaw — at least in terms of the definition of the term, as one who violates the letter of the law. I will, however, continue to obey the intent of those laws by following right-of-way and imploring other cyclists to do the same.

“Although I don’t wear spandex, I break laws every day. Lots of them. Walking, biking, driving. We need to get over the idea that traffic laws lead to safety. Plus, time is on the side of bicyclists as there will be more of them in the future. As always, I will use the opportunity to give a shout out to the Idaho Stop.” -PC

“I have the opposite attitude. We have no dedicated infrastructure, nor protective laws, therefore the law does not apply to us.”  -BR

I appreciate the respectful dialogue and understand that these conscientious objectors are making thoughtful personal decisions, but based on my dozen years studying traffic safety, designing bikeways and teaching bicycle safety, I have to disagree with the premises on which their arguments are founded.

A similar crash-typing study done by the Wisconsin Dept. of Transportation found similar results here. Until someone shows me  a study that disputes these results, as a League Certified Instructor for teaching bicycle safety, I will continue to advise people to stop for stop signs and wait for green lights at traffic signals. I do agree that we now have lots of un-warranted stop signs and traffic signals that were installed in a misguided attempt to stop people from speeding or to force people to yield to pedestrians at crosswalks. But rather than pass a version of the Idaho Stop Law so people on bikes are not required to stop for unwarranted signs and signals, I would prefer to slow cars with more enforcement and traffic calming when necessary. Rather than adapt our laws to ineffective traffic engineering, let’s design roads so they are safe for all users and actually enforce speed limits, rather than enforce 10mph over the limit.

In a crash between a person walking or biking and a motor vehicle, even a reduction in speed of 5mph can mean the difference between life and death. A study done by the AAA showed the average risk of death for a pedestrian reaches 10% at an impact speed of 23 mph, 25% at 32 mph, 50% at 42 mph, 75% at 50 mph, and 90% at 58 mph. In Zurich, the urban area speed limit was lowered from 60 to 50 km/h [37 to 31 mph] in 1980 in response to a reduction in the open road speed limit. In the year after the change there was a reduction of 16 percent in pedestrian accidents and a reduction of 25 percent in pedestrian fatalities (Walz et al, 1983). The authors of this study observed that, because of those who “don’t believe in the influence of driving speed on impact speed” or who “just don’t care at all”, “it must be proven in every country that the laws of Isaac Newton are true”.) [page 41]

Relationship of Vehicle Speed to Odds of Pedestrian Death in Collision

The one place where it probably is safer to drive with the flow of speeding traffic rather than the speed limit is on freeways where 99% of cars are traveling 5-10 mph over the posted limit and there are very few, if any, vulnerable road users. Of course there are still law enforcement officers, highway workers, and people who have had break downs, but those numbers are small compared to the volume of traffic on the road. Still, that argument is like saying referees should stop penalizing hockey players for fighting because everyone wants to do it and there are no innocent players. As I mentioned above, I prefer we enforce the rules we have and change those we don’t like.

If the vast majority of people want to drive 75mph on the interstate highway, let’s change the speed limit rather than pay to have signs put up that everyone knows they can ignore and then pay troopers to enforce an unwritten law.

As a paid advocate for bicycling and as a bicycle safety professional, I will continue to advocate for streets that are designed to move people and goods, not motor vehicles. I will also continue to make the case that all road users would be safer if we all obeyed all the laws all the time.

But then I have been tilting at windmills for most of my life and some habits are hard to break.