Most UW System students and staff -- including 72% of those at UWM -- choose not to get emergency alerts.

By Rory Linnane, Wisconsin Center for Investigative Journalism - May 2nd, 2013 11:19 am
Get a daily rundown of the top stories on Urban Milwaukee 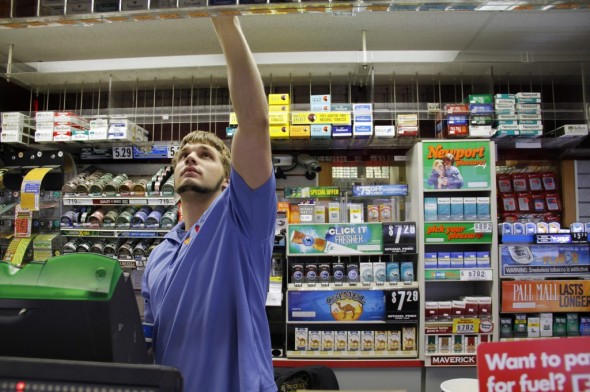 UW-Madison junior Eric Cardinal was working at this gas station near campus when he got a text alert about a suspect who happened to be in the store with him. He pushed a silent alarm and police made the arrest. Kate Golden/Wisconsin Center for Investigative Journalism.

On March 5, University of Wisconsin-Madison junior Eric Cardinal was working the late shift at a Shell station near campus when he read a text alert from the university warning of a suspected shooter on the loose: “Police looking for Male/Black wearing red & black flannel shirt headed west out of University Houses.”

Then Cardinal saw a man in his store duck, as a police car rolled through the parking lot.

“That’s when I assumed he was one of the suspects they were looking for,” Cardinal said.

In the wake of campus shootings the past five years, police throughout the nation are using text alerts to deliver warnings and advice to students in emergency situations. The concise messages are delivered to all students, faculty and staff — except, at many campuses, for those who haven’t signed up.

Only three of the University of Wisconsin System’s 13 four-year campuses — Platteville, Stevens Point and Parkside — have more than half of students, faculty and staff signed up to receive text alerts, according to a review by the Wisconsin Center for Investigative Journalism.

The overall participation rate for all 13 campuses is about 32 percent, the Center found, based on data from each campus. Some campuses provided exact counts, while others only had estimates.

UW-Platteville achieves nearly total participation through automatic enrollment. Students cough up their cell phone numbers when they apply and register for classes. Later they’re notified that they can “opt out.” UW-Stevens Point recently implemented the same method, and now boasts a participation rate of 88 percent.

Other UW System campuses rely on students, faculty and staff to “opt in” by independently entering their numbers in the text alert system.

At the state campuses using the opt-in approach, the highest participation rate, 65 percent, is on the Parkside campus. In contrast, the Whitewater campus has no text alert system.

At the flagship UW-Madison, just 25 percent of students, faculty and staff have signed up for the text alerts.

Cardinal is one of them. In the March 5 incident in Madison, police had rounded up two suspects and were seeking a third when Cardinal saw the man duck.

“I texted my friend who also works here, ” Cardinal said. The friend advised him to push the store’s silent alarm. He did.

While the case remains under investigation, UW-Madison Police Sgt. Aaron Chapin praised Cardinal’s response. “Had he not activated the alarm and been aware of his surroundings, we may have not located that individual,” he said.

“When planning for emergencies, we don’t put all our eggs in one basket,” said UW System spokesman David Giroux.

But in some instances — for a student on the move, or on the job like Cardinal — a text might be the only message to connect with the target. 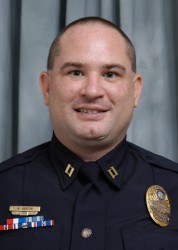 UW-Madison Police Capt. Michael Newton, who helps advise other campuses in the UW System, said each school should make its own decision about how to offer text alerts. Photo courtesy of Michael Newton.

Even in class, students often look at their phones. Students surveyed at the University of New Hampshire said they checked their cell phones an average of one to five times per class.

“The best way to respond (to an emergency) is to have the most instantaneous message delivery on a college campus, and that by far is text messaging,” said Michael Hanley, director of the Ball State University Institute for Mobile Media Research.

According to Hanley’s research, 81 percent of students at Ball State University use text messaging as their primary form of communication, compared to 9 percent who mainly rely on email.

In a 2012 survey by the Division of Information Technology, 35 percent of UW-Madison students said they use a cell phone that does not have Internet access, which means they may get text alerts but not emails. UW-Madison text alerts can reach phones quickly, within two or three minutes of being sent, campus Police Capt. Michael Newton said.

In 2007 and 2008, troubled students shot themselves after killing 37 people and wounding dozens more at Virginia Tech and Northern Illinois universities.

Just 10 percent of NIU’s students were signed up for text alerts in 2008, when a gunman shot 21 people in a lecture hall, killing five. In response to student concerns, the school currently is switching to an opt-out system. Although it’s not fully implemented, 66 percent of students are receiving the alerts.

“Generally, any system that automatically puts everyone on a campus in a database is better, and then you have to opt out,” said Anne Glavin, president of the International Association of Campus Law Enforcement Administrators.

In 2011, nine months after a student fired an AK-47 in the library at the University of Texas at Austin, the state passed a law requiring all public and private universities to have mandatory text alert systems, with an opt-out.

“You just look around the country and see what happens, and anything you can do to be somewhat prepared is important,” said Erickson, from UW-Platteville. “Shootings are the big one that really made a lot of people stop and think that wow, that can happen here.”

Opt in, opt out

At UW-Parkside, the text alert system is promoted vigorously with emails and campus presentations. The school’s voluntary sign-up rate of 65 percent is highest among the state’s campuses using opt-in text alert systems.

From there, the rates take a dive. Coming in next is UW-La Crosse, at 43 percent, then UW-Green Bay, at 33. Three schools have participation rates in the 20s and three are in the teens.

Matt Kiederlen, chief of police for UW-Whitewater, which has no text alert system, has considered implementing one, and would like it to be mandatory if he did.

“Otherwise, it becomes rather nonsensical,” Kiederlen said. “If you do a voluntary sign-up, are you really reaching the volume of people you need to in a real emergency?”

At UW-Green Bay, emergency management coordinator Joe Rozum would like to increase the participation rate. “In case of emergency, that would give us much more access to everybody, especially if it’s an ongoing incident,” he said.

The easiest way to have every student receive text alerts would be to make participation mandatory. Although officials at every campus said they have discussed moving to a mandatory system, so far most haven’t budged.

“That would have to come from a higher entity, someone like the chancellor,” Rozum said.

Officials are frequently concerned about invading student privacy by asking for phone numbers. Several also noted students could have to pay for the messages they get, depending upon their phone plans, whether they want them or not.

Others find these concerns less significant. 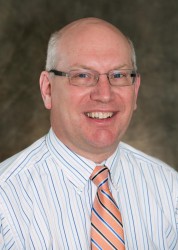 Paul Erickson, UW-Platteville spokesman, said the campus automatically enrolls students in its text alert system but gives them the option to opt out. Photo courtesy of UW-Platteville.

“I guess our main goal is to reach as many students as possible and if they’re inconvenienced by an extra text message, if it’s 10 cents that could save a life somewhere, that’s a trade-off we take,” UW-Platteville spokesman Paul Erickson said.

UW-Stevens Point business analyst David Dumke, who led implementation of the school’s new opt-out system, said he imagines the campus like a bell curve. A few students want the alerts enough to sign up, he hypothesized, and a few will opt out. The rest will go with the flow.

UW-Madison police, contracted to assist other campuses with emergency planning, recommend that each make its own decision on how to enroll people in text alert programs.

“You’ve got to talk with your campus and see what the campus is willing to support when it comes to the text piece,” Newton said.

UW-Madison last reviewed its text alert system in 2011, Newton said. At that time, students, faculty and staff said they preferred a voluntary system. He thinks it may be time to do a new survey.

Ilya Yakovlev, who joined UW-Parkside in June as the chief information officer, said he plans to propose making the switch to a mandatory system. In his previous post at St. Cloud State University, he said he helped the school transition to an opt-out system and got positive feedback from students.

“We know there may be a cost to the recipient, and I’ve observed us being very judicious about when we use the system,” Yakovlev said of UW-Parkside’s alerts. “To me it’s well worth knowing not to come to school because it’s not safe.”

At UW-Madison, Newton said every effort is made to keep alerts to a minimum — about six per year, he estimated.

“Sometimes (the alerts) get annoying,” he said. “Most of the time they’re not even close to where I am.”

But when an emergency did occur close to him, Cardinal was glad he got the message.

This project was produced in collaboration with the Investigative Journalism Education Consortium, ijec.org. Funding from the Robert R. McCormick Foundation supports the consortium and its projects. The nonprofit Wisconsin Center for Investigative Journalism (www.WisconsinWatch.org) also collaborates with Wisconsin Public Radio, Wisconsin Public Television, other news media and the UW-Madison School of Journalism and Mass Communication.

Additional reporting by Amy Harwath of the University of Illinois at Urbana-Champaign.