The Worst Law Breakers on the Road

Autos, pedestrians and bicyclists all break the laws, but studies show automobile drivers do it the most.

By Dave Schlabowske, Bike Federation of Wisconsin - Apr 26th, 2013 11:39 am
Get a daily rundown of the top stories on Urban Milwaukee 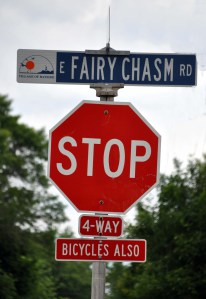 “Bicycles Also” signs like this should not really be necessary, for a lot of reasons.

I can’t tell you how many times people complain about “cyclists” who run red lights, blow through stop signs, ride without lights at night or and don’t pay for the roads.  If I had a dollar for every time someone told me that cyclists should be taught the rules of the road and given a test like motorists, I could retire and move to Copenhagen where those things actually happen.

But it surprised me to hear these tired myths brought up in response to sincere requests to level the playing field when innocent people riding bicycles or walking are killed by someone driving a car who has been proven to be negligent. It is one thing to complain about “scofflaws” and quite another to tell someone who has lost a loved one or friend that anyone walking or bicycling deserves what they get because roads are meant for cars and all “cyclists” are self-righteous, spandex wearing law breakers.

On April 9th, at the Bike Fed’s Lobby Day in Madison, that actually happened to a person who had taken time off to travel to the Capitol because a friend bicycling legally and safely on a straight, rural road had been killed in broad daylight. When meeting with her elected representative, the legislator balked at supporting the Vulnerable User Law. He went on to tell his constituent, that even though the driver admitted guilt and has been charged,”bicyclists” don’t obey the laws and although it may be legal to ride a bike on the road, the roads were meant for cars and people deserve what they get if they choose to roll the dice and ride somewhere other than trails.

To the credit of our citizen advocate, who had the support of a Bike Fed staffer and one of our paid lobbyists in the meeting, she responded with facts and a rational argument that all road users have a right to expect people in cars to obey the laws. In fact the group did such a good job making the case for the Vulnerable Users Law that the legislator eventually apologized and said he would likely support the bill if it comes to a vote on the floor. While that’s great, and shows the importance of talking to the people we vote for about issues we care about, it also points to a genuine public relations problem bicycling has.

There seems to be an almost universal perception that as soon as someone puts a leg over a bicycle, they stop obeying traffic laws. I think this is because the laws that are easy to break and get away with on a bicycle are much more obvious. Having studied traffic safety for more than a decade, I’ve found that people break the traffic laws they can get away with, no matter what mode of travel they are using. People in cars know they can get away with driving 5-10 mph over the speed limit and that they don’t have to stop for someone trying to walk across the street in a crosswalk. People walking know they can cross against the “Don’t Walk” light at a signalized intersection if no cars are coming, and people on bicycles know they can run red lights or stop signs in similar situations. 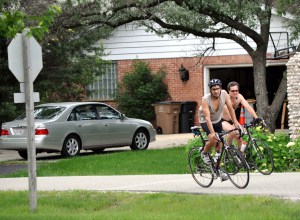 These scofflaws are actually in the minority.

When I was the Bicycle and Pedestrian Coordinator for the City of Milwaukee Dept. of Public Works, part of my job was to investigate complaints about speeding on neighborhood streets and when people said they had trouble crossing a street at a crosswalk. Before I could respond with a solution to these complaints, I needed facts so we did studies to check for speeding and to see what percentage of people failed to yield to pedestrians in crosswalks. I also did bicycle counts at intersections where I checked to see how many people obeyed the traffic signals.

So what did these studies find?  Get ready for a big shock, but my studies found that in general, people riding bicycles tend to be more law-abiding than people driving cars. The percentage of people riding bicycles that made illegal maneuvers (ran red lights, rode on sidewalks, or rode against traffic) through the intersections where we did the counts varied from 11% to 48%.  In short, the majority of people who ride bikes obey the law. This definitely runs counter to common perceptions. 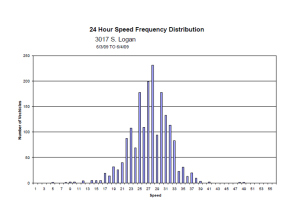 (Click to see larger image) As you can see, every car recorded to the right of 25mph is breaking the law. More cars are going above the posted limit than at or below the limit. So most people driving cars are breaking the law.

What about people driving cars?  How law-abiding are they?  Milwaukee DPW has done a lot of radar speed studies because so many people complain about speeders on the street where they live.  The results of the speed studies vary, but in almost every case the results show a bell curve shifted to the right of the posted speed limit, as in this speed study to the left. While the results of the speed studies I did varied, they did not vary as much as the bike counts.  In some speed studies, the median speed is at or just below the posted speed limit by a mile or two per hour, which means that in the best case scenario a little less than half of the people driving down our neighborhood streets are breaking the law by speeding.

The other major traffic complaint concerns failing to yield to pedestrians in a crosswalk.  You may have noticed many cities have begun to put in curb extensions (“bump-outs”) and R1-6 in-street “Yield to Pedestrians: State Law” signs.  You can see these bump outs and signs in Milwaukee, Madison, Wisconsin Dells and many other communities across the state. These are typical engineering responses to complaints where people say they can’t get across a street because the cars won’t stop for them when they are in the crosswalk. 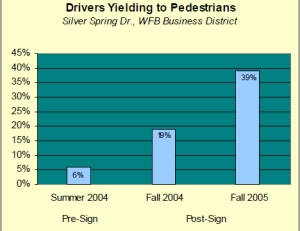 (Click to see larger image) As you can see, even after a media campaign and installation of sign in the middle of the road, 61% of motorists still broke the law and did not yield to pedestrians in a crosswalk.

There have been a couple pretty good studies done to check the effectiveness of these signs.  The first study was done in Whitefish Bay by Bay Ridge Consulting.  In that study, before Whitefish Bay installed the in-street yield to pedestrian signs, 94% of motorists failed to yield to pedestrians in the crosswalk.  The study then checked twice after the signs were installed and a there was a media campaign to alert people about the law requiring motor vehicles to yield to pedestrians.  In the final check, the yield compliance rate increased to 39%, which is a big jump, though still not very good odds if you are betting your child’s life when they walk to and from school.

The second yield compliance study was done more recently by Mark McComb.  He looked at a wider variety of crosswalks, some with the in-street yield signs, some without, some crosswalks in the City of Milwaukee and some outside the city. His results were more disappointing.  The best result he got was 23% of motorists yielding to pedestrians in the crosswalk at Oakland and Olive.  But at two study locations, none of the cars yielded to pedestrians. So while I agree that we would all be safer if everyone (pedestrians, bicyclists and motorists) would obey all the traffic laws, it is pretty clear that people will break the laws they think they can get away with if it seems to save time.  People riding bicycles are no worse than any other user of our roads.  In fact, the studies suggest people who ride bikes are more law-abiding by quite a large margin than people who drive cars (and often these are the same people). 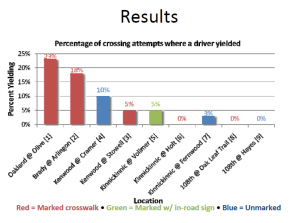 (Click to see larger image) In two of the study locations, 100% of the drivers broke the law and failed to yield to a pedestrian in the crosswalks.

So why do bicyclists have this reputation as arrogant scofflaws? Perhaps it is because the culture of driving a car is shared by the majority of adults and that speeding or ignoring people trying to cross the street is part of that shared experience. In fact, speeding is so accepted that it is called ‘driving with the flow of traffic,” and people know they can drive 5-10 mph over the posted limit right past a State Patrol car without fear of a ticket. Driving a car through a red light is still not generally accepted behavior (though it does happen quite frequently), so perhaps to a person sitting at a red light behind the wheel of a car, it seems more flagrant, or a personal insult when someone on a bike rides blows through the intersection. The problem is compounded by the fact that while most adults drive cars and share a car culture, they don’t ride bicycles for transportation. Although about half of the adults in Wisconsin ride bicycles, most only ride recreationally. Because they don’t ride to get anywhere, they don’t share the same culture of “driving a bike” where lots of people blow through stop signs because they are in a hurry to get to work, the store, etc.

I hope this column helps give you some statistical ammunition for the next time someone calls all “bicyclists” scofflaws. Even though these studies show people on bikes are generally more law-abiding than people in cars, we do have a very real public relations problem. One simple way we can all help fight the myths about bicyclists is for each of us to always obey the rules of the road when we are on our bicycles.

And when you’re driving a car, try always driving the speed limit or slower, even on the freeway. When your passengers complain that you are a slow poke, remind them of the law and that you also stop for pedestrians in crosswalk and stop for red lights when you ride a bike.

We can all hold ourselves to a higher standard. Meanwhile, all those who care about the safety of bicyclists should spread the word: bicyclists are law-abiding, red-blooded, apple pie eating Americans.  We are the good guys.

16 thoughts on “Bike Czar: The Worst Law Breakers on the Road”