State lags behind Minnesota in testing lakes & rivers for chemicals that hurt reproduction and could cause diabetes, cancer.

By Kate Golden, Wisconsin Center for Investigative Journalism - Apr 22nd, 2013 12:09 pm
Get a daily rundown of the top stories on Urban Milwaukee 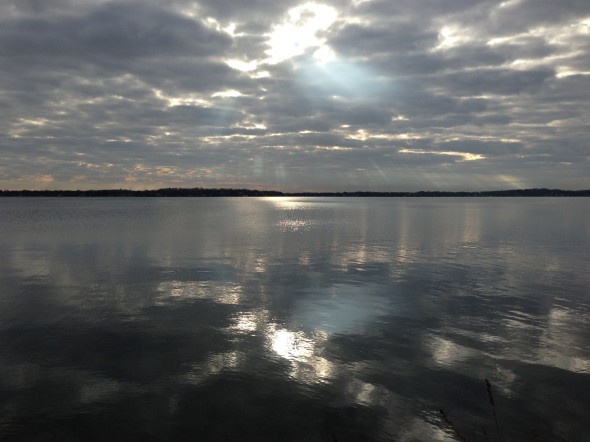 Unlike Wisconsin, Minnesota has been systematically testing its surface waters for endocrine disruptors and other chemicals of emerging concern. Lake Monona, Madison, in November 2012. Kate Golden/Wisconsin Center for Investigative Journalism

In America’s Dairyland, steroid hormones from livestock have been found in the snowmelt runoff from large cattle-feeding operations.

In the Shenandoah River, researchers investigating recurring fish kills found something in the polluted waters had feminized 80 to 100 percent of the male smallmouth bass, causing them to produce immature eggs in their testes.

And in Minnesota, three weeks after researchers put male minnows in lakes, they developed intersex characteristics.

All over the country, chemicals known to disrupt or act like hormones seem to have permeated the waters and may be harming wildlife —†or people.

“The more you know, the more scared you are,” said Kimberlee Wright, executive director of the Wisconsin-based nonprofit law center Midwest Environmental Advocates.

Known as endocrine disruptors, these chemicals are in soaps, plastics, industrial solvents, pesticides and herbicides, as well as human or animal medicines. Some occur naturally but hundreds are man-made and found everywhere that modern chemistry has improved people’s lives.

A United Nations report in February declared endocrine disruptors a “global threat” to wildlife and humans, particularly infants and children. Close to 800 chemicals are known or suspected to disrupt hormone function, but thousands in use have never been tested, the U.N. report said.

Despite growing evidence of risks, state and federal governments have issued little guidance on how much of these suspected endocrine disruptors in our lakes, streams and groundwater constitute danger for fish, wildlife or people. These chemicals are largely unregulated.

Wisconsin has not systematically looked for endocrine disruptors statewide. Research and regulation of them is poorly funded and loosely coordinated, according to a Wisconsin Center for Investigative Journalism review of records and interviews with government officials and environmental experts.

“We’re not a building full of bureaucrats ignorant to the problem,” said Brad Wolbert, chief of the Wisconsin Department of Natural Resources’s recycling and solid waste program. “It’s just that it’s a really big problem.”

Dozens of pesticides have been associated with endocrine disruption. Pesticides have commonly been detected in surface waters, and in an estimated one-third of drinking water wells in Wisconsin, according to a survey by the Department of Agriculture, Trade and Consumer Protection.

Endocrine disruptors mess with the body’s signaling systems, which respond with exquisite sensitivity to tiny amounts of hormones like estrogen or testosterone. Hormones regulate growth and development, stress response, metabolism and a host of other functions.

High levels of exposure to certain endocrine disruptors have been found to cause diabetes or cancer. But even exceptionally low doses may be harmful — although research funded by the chemical industry argues the evidence for this has been overstated. 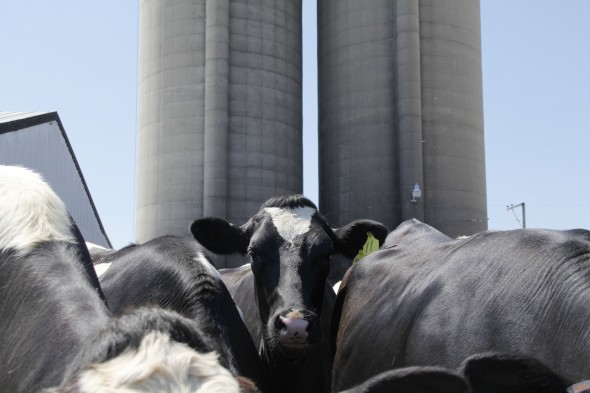 One major potential source of endocrine disruptors in the environment: Agriculture. An Iowa State University study estimated land applications of livestock manure accounts for more than 90 percent of the total estrogens in the environment. The U.S. Environmental Protection Agency is concerned about potential impacts on fish. Kate Golden/Wisconsin Center for Investigative Journalism

Scientists coined the term “endocrine disruption” in 1991, at a conference in Racine, after troubling findings emerged from the Great Lakes in the 1980s. Researchers found that women who ate as few as two meals a month of PCB-contaminated Lake Michigan fish delivered smaller babies, and their children later scored worse on memory and attention-span tests.

Scientific evidence has begun to link “exposure to some toxic chemicals to a range of reproductive and childhood developmental problems,” according to a 2010 report from the nonprofit Pew Health Group.

At the same time, none of the dozens of experts interviewed said Wisconsinites should stop drinking their well water or swimming in lakes. The science isn’t there yet, they said.

DNR does not have a testing program for the presence of unregulated endocrine disruptors in surface waters, according to Susan Sylvester, head of the agency’s water quality bureau.

Said Melissa Malott, water program director of the environmental advocacy group Clean Wisconsin: “There’s this critical issue, where there’s not funding at the state level or the federal level to figure out how widespread it is or how problematic it is.”

It is quite a contrast to neighboring Minnesota, which sampled 50 lakes last summer for these and other contaminants of emerging concern.

“Minnesota has been by far the most proactive in terms of funding statewide studies on endocrine disruptors,” said Dana Kolpin, lead scientist for the U.S. Geological Survey’s Emerging Contaminants project.

Minnesota has spent at least $1.42 million on such research since 2008, funded in part by a voter-approved sales tax that pours millions into a Clean Water Fund each year. The state’s sampling and monitoring for effects in rivers, streams and groundwater has been conducted in partnership with the USGS and St. Cloud State University.

Wisconsin, like other states, relies on the U.S. Environmental Protection Agency for guidance on how to safeguard its waters. But the EPA has not provided such guidance, DNR spokesman Bill Cosh wrote in an email.

Seventeen years ago, Congress told the EPA to start screening chemicals for endocrine disruption. The task included an estimated 87,000 chemicals, since narrowed to 10,000. From 1999 to 2010, the EPA received $131.5 million for endocrine disruptor research, though not all of it was spent that way.

Hundreds of studies have since documented various chemicals’ potential to interfere with endocrine systems. Yet in 2011 the EPA’s inspector general slammed the agency, saying the EPA†still “has not determined whether any chemical is an endocrine disruptor.”

The EPA said in a statement that it had to start “from scratch” to develop scientifically rigorous new screening methods, and added that “the pace of the program has increased.”

Chemicals widespread in the environment

In 2002, the USGS showed that these chemicals were widespread in streams susceptible to contamination. Since that landmark national study, research on them has exploded.

Most often, endocrine disruption in wildlife —like the Minnesota intersex minnows or the Shenandoah River bass —cannot be blamed on a single chemical because the waters contain so many different pollutants.

Some endocrine disruptors are hormones, like the progesterone that University of Wisconsin researchers recently found in runoff from Wisconsin livestock operations. The good news from that EPA-funded research was that the hormones degraded so rapidly the researchers surmised “minimal impact on aquatic organisms.” 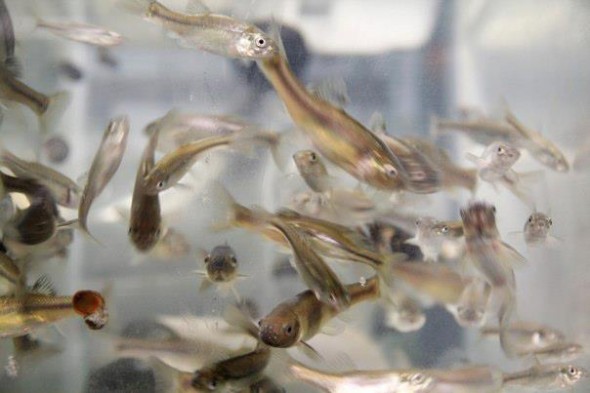 The fathead minnow is a dull, common bait fish, but it has become an important species for research on endocrine disruptors. Here, fish are being raised for research at a U.S. Environmental Protection Agency laboratory in Duluth, Minn. Kate Golden/Wisconsin Center for Investigative Journalism

But they also a reported a more ominous finding: the levels of progesterone found were high enough to slow down male laboratory minnows’ sperm and decrease females’ fertility.

Some chemicals are not hormones but just act like them, or block them.

And some chemicals in Wisconsin’s environment already known to cause health problems are now pegged as possible endocrine disruptors. These include PCBs in the Fox River, neurotoxic mercury in the lakes, and pockets of arsenic, nitrates and the pesticide atrazine in wells.

No widespread sampling in Wisconsin

DNR acknowledged in a January 2012 report that pharmaceuticals and personal care products “have been found in low but surprising quantities throughout the Great Lakes,” and warned that “these products are a cause for concern as they have been linked to several problems such as intersex fish.”

The report added: “In an effort to be proactive and protective of humans and wildlife, Wisconsin should consider developing water quality standards for these pharmaceutical byproducts.”

But it noted that it would need a surface water monitoring program “to determine the scale of this potential problem in the state.”

But it also said pesticides were “not ranked as a top priority by internal staff.”

In lieu of an overarching approach to endocrine disruptors, DNR addresses them through existing programs.

For instance, landfills —†from which endocrine disruptors and other chemicals may leach into groundwater —†are subject to much tighter standards now than several decades ago, Wolbert said.

The cleanup of Superfund sites or brownfields may target regulated chemicals but clean up unregulated endocrine disruptors along the way.

The agency is also trying to educate the public about proper drug disposal. It recently published a report estimating that just 2 percent of the pharmaceutical waste in Wisconsin is properly collected through take-back programs.

And in conjunction with Minnesota, Wisconsin warns people not to eat some Mississippi River fish because they are contaminated with the potential endocrine disruptor PFOS, once a key ingredient in 3M’s Scotchgard.

Like other states, Wisconsin and Minnesota must report to Congress every two years on their water quality protection efforts.

Wisconsin’s names algae blooms and climate change as emerging water issues. It includes a brief recommendation to look for “recently discovered contaminants” in groundwater, but does not address the issue of endocrine disruptors.

Cosh wrote that the agency is aware Minnesota is doing more, and added, “Our current surveillance program is supported by the resources we have available.”

Wright, the Midwest Environmental Advocates lawyer, said environmentalists have not agitated for much action on endocrine disruptors in Wisconsin despite a need for it.

“There’s so much trying to hold the line on environmental rollbacks that addressing emerging issues is almost impossible,” she said.

Malott, of Clean Wisconsin, said state and federal governments have failed to adequately address the risks.