Habitat for Humanity works on a five-year, $20 million project to revitalize the Washington Park neighborhood.

By Andrea Waxman, Milwaukee Neighborhood News Service - Apr 9th, 2013 09:30 am
Get a daily rundown of the top stories on Urban Milwaukee 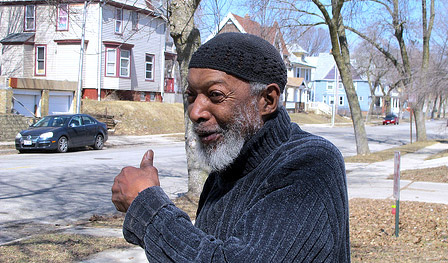 Garfield Newble was pleased to hear that Habitat for Humanity is focusing on Washington Park, where he has lived for many years. (Photo by Andrea Waxman)

Garfield Newble bought his home at 1615 N. 33rd St. in the Washington Park neighborhood 13 years ago. He paid for it with cash. Now the house needs repairs so when he saw a Milwaukee Habitat for Humanity sign and people gathered in an empty lot across the street, he walked over to investigate.

“My house needs siding. I got good credit. Can I get an application?” Newble asked Habitat Executive Director Brian Sonderman.

It was then that Newble, 74, learned that the nonprofit had just announced that Washington Park had been chosen for its first Neighborhood Revitalization Initiative. After two years of strategic planning, Habitat and its corporate partners adopted a strategy to focus the organization’s new housing construction and repairs on one neighborhood. Habitat also will work with Washington Park Partners, an alliance of residents, businesses and nonprofit organizations, to incorporate other community-building activities.  The initiative is expected to cost almost $20 million and take approximately five years.

Newble, a father of seven who previously owned and lived in two other houses in the neighborhood, was pleased at the news. “I feel good about Habitat building new houses here. Then we can bring the neighborhood up. Houses like this need repairing. We shouldn’t have to live like this,” said Newble, who volunteered for Habitat years ago.

According to Washington Park Partners’ Sustainable Communities Director Matt Melendes, “The housing stock in this neighborhood was built between 1890 and 1920, so it’s 90 years to 120 years old. Residents need help fixing up these old assets.” 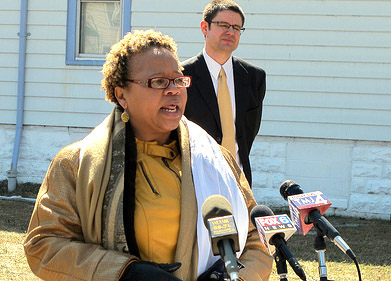 Habitat selected Washington Park for the initial Neighborhood Revitalization Initiative because of its strong resident leadership and the interest of its corporate partners, particularly Harley-Davidson whose headquarters is there. Funders include the Harley-Davidson Foundation, Joy Global, Wells Fargo and the Brewers Community Foundation.

Sonderman said he is impressed by the number of residents who are actively engaged in the community. The Washington Park Sustainable Communities Plan “demonstrated to us that they had a vision for what was possible and it was not outsiders coming in and prescribing a solution, but residents themselves identifying what they want to see happen,” he added.

Some areas the initiative will emphasize include financial and home maintenance education and access to community resources.

“The Neighborhood Revitalization Initiative takes Habitat’s model and plugs it into the idea of community development, of all of us collaborating and working together on multiple facets of the neighborhood,” Melendes said.

At some point during the five years, Habitat will begin to explore replicating this model in another neighborhood, Sonderman said. “But for now our focus and our energies are really on implementing this strategy in Washington Park.”

In addition to building 150 new houses, Habitat’s Neighborhood Revitalization Initiative offers Washington Park homeowners the opportunity to apply for zero interest, partially forgivable loans of up to $15,000 to assist with critical home repairs. The program is aimed at elderly or disabled residents, single parents, veterans and households with five or more permanent residents. Habitat will offer twice-weekly orientation sessions in the neighborhood.

Newble said he plans to apply for a loan.