Safe House Is Still for Spies

Since 1966, it’s been the city’s “undercover bar” and tourist attraction. 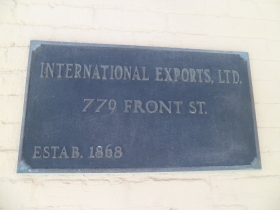 Undercover agents of all kinds have been seeking refuge at Milwaukee’s Safe House since 1966. Number six million is expected to walk through the door sometime in May. Of course, at the Safe House, customers can’t just walk through the door. For starters, they have to find it. Located in an alleyway, the entrance is inconspicuous: There’s no neon sign, no windows showing customers inside – just a simple placard, located next to a red door, advertising “International Exports, Ltd.” Even after admittance, customers can’t just waltz in. They must either provide the password or act out some kind of charade in order to enter.

The spy-themed restaurant/bar/museum is the brainchild of David Baldwin, who took over four different businesses on Front St. in order to gain enough square footage to create one of the city’s most iconic establishments. An Arthur Murray dance instructor, Baldwin, along with another partner, originally planned to open a dance club. However, when Baldwin’s love for all things James Bond started to take over, his partner backed out. Up until three months ago, David and his wife Shauna ran the Safe House. Now, partner and manager Jerry Price is bringing new life to the aging hotspot. 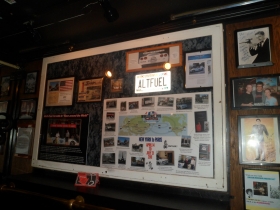 Price’s race around the world. Photo by Audrey Jean Posten.

“I decided to come in and carry on the legacy,” Price says.  Although Price’s first visit to the Safe House was back in the 1970s, he didn’t form a real “bond” with the Baldwins until 2005. That year, he came to them seeking a sponsorship for the Aston Martin car he raced across the United States. The Safe House climbed on board and eventually sponsored another car, the Safe House One, a Chevrolet Corvette that ran on seven different fuels, including vodka. Price piloted the car from New York City to Paris in World Race 2011.

Price has already instituted some changes at the Safe House and customers can expect more to come. “We get a ribbing because some things haven’t changed in 47 years,” Price says, “but why change something that’s worked well? It just needs a little tweaking.” One of the first things Price updated was the kitchen and the food. “To be honest,” Price says about the food, “it sucked.” Another staple on the chopping block might be the women’s bathroom’s famous poster of a young, nearly-naked Burt Reynolds, who will likely get traded for a more contemporary hunk. The ejection seat at the far left end of the bar will also be replaced. Located right next to the entrance, Price says it’s just not at the most convenient spot.

Aside from design changes, Price says the Safe House will soon feature more dancing and the adjoining Newsroom Pub some live music. “We’ve been an icon for people visiting Milwaukee, and 30 to 40 percent of our business is people from outside the area, but now we’re trying to do more to get the locals to see what we have to offer.”

Price also wants the Safe House to get back to its more interactive roots. “We’re getting more people involved now,” Price says. “We give a lot of tours and take people from place to place. I personally come around and talk about the history.” After all, he says, “The history of the place is one of the main reasons people come here.” 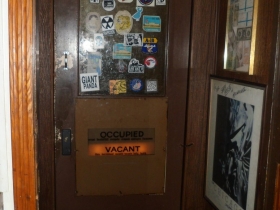 The Safe House’s eclectic design and crazy collection of items is another big reason. This year, onmilwaukee.com readers voted it the best bar on or near Water St. After being seated, patrons are given a mission – if they choose to accept it – which takes them throughout the Safe House. Along the way, visitors will encounter a plethora of James Bond items, but can also solve the world’s largest mechanical puzzle, receive instructions in a secret phone booth, spy on their significant other at the bar through a window in the ladies room and take a spin in a secret booth that is hidden behind a glass case of Safe House merchandise. The walls and ceilings feature an amalgamation of lighting, stained glass, autographed photographs of famous Safe House visitors, a “UFO” that used to deliver food to Safe House customers, and spy memorabilia and weaponry. A clear tube runs throughout the entire building and is used for mixing the Safe House’s ultimate martini. If agents want the password to get into the Safe House for future visits, it can be found in five different locations throughout the tour. 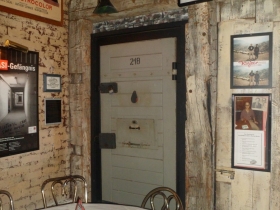 Although the Safe House is steeped in fictional spy mystique, Price says its also a place where “fact meets fiction.” The safe house name comes from World War II and was the term for the underground shelters French citizens used to house American pilots shot down over their country. One stop on the tour features a chunk of the Berlin Wall encased in glass. At another, patrons can see a cell door from the prison where KGB double agent Werner Juretzko, who is a friend of the Safe House, spent time during the Cold War. The Wisconsin Wall of Honor features a photo of every Wisconsin soldier killed in the line of duty since the Gulf War. Across from the Safe House’s magic bar, which features a magician bartender on weeknights, is a photo display of Price’s racing adventures. The Newsroom Pub, a 2000 addition to the Safe House, is home to the Milwaukee Press Club and its mascot, the mummified cat Anubis. The walls in the pub’s main area, as well as those in the meeting room next door, all feature signature plaques of famous politicians, celebrities and sports stars from the Press Club’s extensive collection.

During the day, families usually have the run of the Safe House, with kids clutching their mission lists in one hand and hurriedly dragging mom or dad around with the other. Katy Pittz brought her younger cousins for lunch one day. “Jaykob just finished chemo,” she says, “so we’re celebrating!” “My favorite part is the spy stuff,” Jaykob says. “You really feel like a spy because you have to find your way in and everything.” Although the Safe House is a great place for kids, Price says it offers an adventure for people of all ages. “I will rotate [the secret booth] for some kids and then turn around and do it for a couple in their sixties,” Price says. “They all come out with the same fascination…Yesterday I watched a mother usher in her three kids and they all had mustaches on. Then, at night, I saw 30 year olds with mustaches too.”

The Safe House’s collection of items, both factual and fictional, was largely collected by Baldwin and has continued to grow over the years. And the items on display are only a small percentage of Baldwin’s collection. “The American Pickers would just love this place,” Price says. Not that anything is for sale. “David’s very protective of his collection,” Price notes. “We plan on adding new adventures to the place, but it’s important to always protect the character and the collection.”