How to succeed at business without ever leaving your neighborhood. 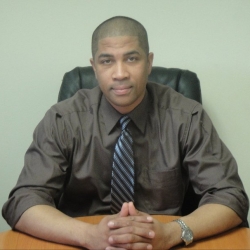 James Phelps didn’t have to stray far from his neighborhood to become a success. Born and raised in a home near 2nd and Locust, he apprenticed at the Wisconsin Regional Training Program “Big Step,” whose office was located on 4th and Locust, and he is now president and co-owner of the JCP Construction, which occupies the old Big Step office. The company is a family affair: his two co-owners are his brothers Clifton Phelps (Vice-President of Office Administration), and Jalin Phelps (Vice-President of Field Operations). Together the three brothers boast 30 years in the construction business.

Their parents owned two investment properties and the brothers three learned about construction by being “helpers.” Not many kids of that era grew up working alongside their dad.

By 1997, he was serving as an apprentice in the non-profit Big Step program. “Lerman Ellis used to run Big Step,” Phelps recalls, “and I credit him for influencing me to make the construction industry my career.”

He’s paid his dues, both literally (to his union) and figuratively. For nine years prior to incorporating his construction company, he was a journeyman painter for Milwaukee Public Schools, before joining KBS construction, where he served five years as an assistant project manager.

His emails are studded with time-saving abbreviations indicating he’s busy in a business that can often (depending on the project team) be cut-throat. The firm employs 14 full time construction workers, and with only one female employee (the office manager), it’s very much a guy-guy business. It’s a union effort, Local 113 – Laborers and Local 264 Carpenters. The average age of the employees in the four-year-old business is “forty-seven-ish,” he says, adding that the company takes pride in paying employees family supporting wages. “It’s part of our mission.” They provide 401K pension and health benefits, too. He feels unions are important in the effort to retain employees both in the office and in the field.

He’s not likely to bite the hand of government programs that help small businesses, like his, survive. For example, he feels companies based in the city of Milwaukee, with a work force reflecting the citizenry of the city, should have preferential bidding opportunities. “In most instances, government helps us grow,” he says. The city of Milwaukee Business Capacity Program helped them nail the North End Phase II project. His firm will do the finish carpentry. Currently, they are working on the concrete package for the Milwaukee School of Engineering parking structure and soccer field. 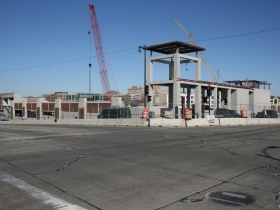 Their website is filled with blue skies and optimism, and images of various projects both commercial and large residential (such as “Scattered Sites III, a project involving twenty-four single infill homes). The rehabilitation (completed in 2010) of the Century City Building #36 (intended for the dormant Talgo train project), and the reconfiguration of the historic Riverside Pumping Station Building were steps on the way to earning a 2010 Business Journal award honoring central city businesses. JCP Construction landed on top with awards for its work for both the Century City Building and the UW-Milwaukee’s Cambridge Commons dormitory.

The company has also ventured outside Milwaukee, doing work on the River Mills Senior Living building in Watertown, WI, and the Wisconsin Institute of Medical Research in Madison. And they have a strong commitment to green, sustainable construction.

Phelps notes that Milwaukee’s construction industry is similar to other areas, in that nationwide, business is picking up, but still not where it was prior to 2008. His philosophy, he told the Business Journal, is to “stay lean and mean…growing smart instead of assuming everything is going to work out.”

Phelps tries to assist today’s youth who want to enter the construction industry. He sees a need for more skilled employees, and says his firm is trying to build a non-typical “farm system” to fill the upcoming need for skilled employees. The greater good of Milwaukee is rooted in its education system, he says, and he wants to provide kids fresh out of high school with the proper tools to succeed and become part of the work force. “We have a difficult road ahead,” he says, “for growing the city and attracting additional talent from outside our city and our state.”