How to Improve the State’s GPS Tracking System

By Mario Koran, Wisconsin Center for Investigative Journalism - Mar 26th, 2013 02:11 pm
Get a daily rundown of the top stories on Urban Milwaukee

About this project: Thirteen offenders told the Wisconsin Center for Investigative Journalism that Wisconsin’s GPS tracking system repeatedly fails, registering false alerts and landing the offenders in jail although they had done nothing wrong. Meanwhile, Gov. Scott Walker is proposing an expansion of nearly 50 percent in the number of offenders monitored by GPS devices.

Offenders and their advocates say that GPS breakdowns waste taxpayers’ money with unnecessary police work and lockups, and hamper offenders’ efforts to restore relationships with their families and retain jobs. The DOC says the system is reliable, but releases few details and acknowledges its performance hasn’t been audited. A key GOP legislator says an audit may be in order.

DAY 2:  How to Improve the State’s GPS Tracking System

The problem of the state’s GPS tracking system for ex-offenders is illustrated by the case of Aaron Hicks. From January 2011 to November 2012, Hicks was arrested at least 12 times for parole violations related to his GPS monitor, spending 74 days in jail, records show. Among these occasions:

Advocates for released prisoners say that GPS breakdowns waste taxpayers’ money with unnecessary police work and lockups, and they hamper offenders’ efforts to restore relationships with their families and retain jobs. 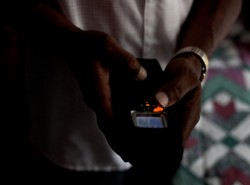 On July 31, 2012, James Morgan stands in his Madison bedroom with a Wisconsin Center for Investigative Journalism photographer. On several occasions, his GPS monitor begins flashing, indicating he is out of range, even though Morgan is well within boundaries determined by his parole agent. The Center spoke with 13 offenders who said such issues as lost signals are landing them in jail repeatedly. Lukas Keapproth/Wisconsin Center for Investigative Journalism

How can Wisconsin’s electronic monitoring using GPS devices be made more reliable and effective? Here are some suggestions drawn from interviews with experts:

Problem: The Wisconsin Department of Corrections does not keep statistics on how many GPS offenders trigger alerts, and does not track how often these result in offenders being incarcerated.

Solution: George Drake, a corrections technology consultant, said agencies that implement GPS tracking should have clearly stated objectives for using the technology and should conduct audits on a biannual or yearly basis.

Problem: GPS monitoring may have little long-term effect on recidivism or behavioral change.

Solution: Robert Gable, who helped design the first electronic monitoring system used to track offenders, said it can be used to promote positive behavioral change by offering “modest incentives” to offenders who follow the rules.

Problem: Probation and parole agents have insufficient time and resources to meet the demands of supervising caseloads of GPS clients.