How to seize the opportunity to build a business. 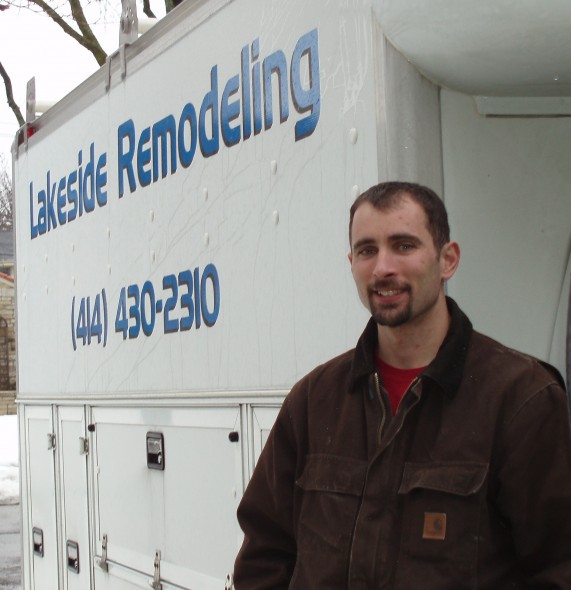 The full-size business truck Joe Pollnow uses now is quite a step up from his original pick-up. Photo by Peggy Schulz.

Joe Pollnow built his career — and a business — in a way that sounds easy but probably wasn’t, helped along by chance encounters and the good will of many people. The result was the creation of his successful Lakeside Remodeling business. 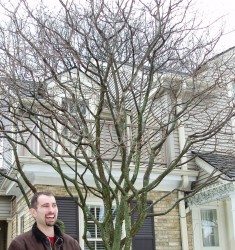 The railing and floor of the second-story porch at this home was yet another of Joe Pollnow’s projects. Photo by Peggy Schulz.

Pollnow was interested in building and repairing things since he was a boy growing up on his family’s farm in Oak Creek.  “I would take a hammer and pound in the nails that had worked themselves out of the siding in the big barn,” Pollnow says.  In high school, he took shop classes and learned to work with wood and metal.

After graduating from Oak Creek High School, Pollnow went to work for a friend of his, Bud Endries, a landlord in Bay View.  While Endries was happy with Pollnow’s work, he could see that Pollnow was both capable of, and needed, much more than Endries could offer.  “He fired me, in a sense,” Pollnow says.  “He pointed me to a career.  Bud was like a father figure to me.”  Endries helped Pollnow find a full-time job, with benefits, for a professional contractor.Once established in that job, Pollnow realized he wanted more and soon started working for himself.  “My motivation at the time was to complete a truck restoration, a four-wheel-drive mud truck.”  So, at the end of the 1990’s, he became his own boss, using that truck and doing home remodeling, but the business had its ups and downs. Still, Pollnow managed to put money aside for the future, and to marry his girlfriend, Sarah.

One day Pollnow was driving his pick-up truck, which had magnetic signs advertising his business.  A couple, who he later learned were from Puerto Rico, followed him to his driveway.  The woman asked him to follow them to their home, which was just a few miles away.  They needed a full second-story addition on their home. They had twin boys, who were 21, and both had cerebral palsy, and the Pollnows’ own youngest son has cerebral palsy. So, by the time Pollnow finished the job, the families had become close friends.  And Pollnow also got a lead for another second-story addition from one of the twins’ therapists, so he felt doubly blessed.

Still, business was often slow.  “I had a four-man crew to support, and my wife had advertised our business on Craig’s List for the first time, with no responses,” Pollnow said.  “Sarah had just put a second ad on the website.  I was praying to God for help.”  On his way home from a job, Pollnow passed an apartment complex on 51st and College with a sign advertising  “Newly remodeled kitchens.”  Pollnow recalls thinking he should consider trying to get into remodeling apartments.  Just a week later, he got a call from a man responding to the second Craig’s List ad:  “I want you to look at my apartments.”  That man, it turned out, was the owner of the building at 51st and College.  Pollnow calls it a “a gift from God,” another kind of magical coincidence. Pollnow and his crew worked at the complex for three years and remodeled 96 apartments. 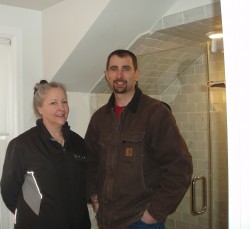 Jean Pollnow and Joe Pollnow in the bathroom of the home, which was completely re-done. Photo by Peggy Schulz

Pollnow credits his mother, Jean Pollnow, for helping get his business going.  “She was the one who motivated me to pay my taxes, get some insurance, take those small steps,” Pollnow says. And he was able to return the favor.  Jean had worked for Lincoln State Bank for more than 30 years when it was bought by Harris Bank, which eventually merged with BMO (Bank of Montreal).  After the Harris Bank purchase, the employees all were assured they would keep their jobs.  Jean worked for three more years, as a commercial lender, but was let go in 2010, when her position was moved to Chicago.  Now she works for her son. She can even appreciate the irony of helping him on one of his many BMO Harris Bank projects.

In another of the many cyclical experiences in Pollnow’s life, Bud Endries, the man who gave Pollnow his professional start, has done work this year for Pollnow on his latest contract job for BMO Harris Bank.

Pollnow describes his business approach as:  “If there’s an opportunity, I’ve jumped on it.  Always keep yourself in a position to absorb an opportunity.”

Pollnow is happy at this point in his life. His business has succeeded, he’s raised a family and  “we’re nearing the pay-off of our house,” he notes.  “I still live in the same house, but I tore it down and rebuilt it on the original foundation.”  Yes, that sounds just like something Joe would do, his friends say.