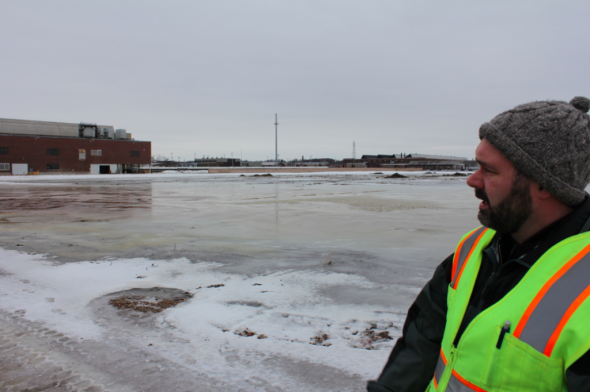 If all goes well, industrial buildings will begin to emerge in the next few years from the bare ground where the A.O. Smith Milwaukee Works used to stand, south of Capitol Drive and west of Hopkins Street on the city’s northwest side.

The Milwaukee Works employed 7,800 union workers at its peak in the 1970s, making truck and auto parts. It was sold to Tower Automotive in 1997 and closed for good in 2006.

The sprawling factory sat empty until 2012 when most of the buildings were torn down for redevelopment by the city of Milwaukee, which has invested nearly $35 million on the site.

The city hopes to create 700 to 1,000 permanent jobs for Milwaukee residents, especially those who live near the old A.O. Smith factory in minority neighborhoods where the official unemployment rate is roughly 20 percent.

“Now that we have a clear site, we are aggressively developing the location as a business site,” said Benjamin Timm, project manager for the Milwaukee Department of City Development. “We know the business sectors we want to go after. They may or may not be ready to locate here at this time. However, we are exploring all of our options when it comes to creating jobs.” 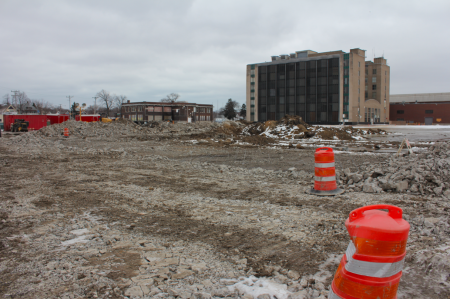 The A.O. Smith research and engineering building, known as the “Glass House,” is one of the few buildings on the Century City site that was preserved for possible reuse (Photo by Mark Doremus)

The city has targeted manufacturers of processed food, machinery, fabricated metal products, computers, electronics, appliances, electrical equipment and medical devices as good candidates to locate in the Century City business park. Some of these companies would require highly skilled technicians but others, particularly food manufacturers, would hire entry-level workers.

This mix of high- and low-skilled employers would be similar to what’s been achieved at the Menomonee Valley Industrial Center, another city redevelopment effort that is close to achieving full occupancy and its employment target of 1,200 jobs.

“I grew up in this area. I know that losing A.O. Smith was really devastating,” said Teig Whaley-Smith, an attorney who represents non-profit developers through his private practice, Community Development Advocates.

According to Whaley-Smith, several factors need to come together before companies are likely to move into the Century City business park. First and foremost, potential occupants of the site must have a business need for a new facility somewhere in the region. That’s a significant issue in an economy that is struggling to recover from the recession of 2007-08. The next question is how Century City stacks up with other potential locations.

On the down side, Century City is remote from downtown. There is no easy access to the interstate highway system. And it’s in a rundown, high-crime urban neighborhood that may not look attractive to the private sector.

On the plus side, the site has rail service that connects to the port of Milwaukee, which in turn gives manufacturers access to global markets. According to project manager Timm, Century City parcels are relatively inexpensive at $55,000 per acre. The site also has high-capacity utility service and storm water drainage systems in place or available without cost to potential buyers. In certain cases the city can offer financial incentives such as tax credits, technical assistance, low-interest loans and grants to sweeten the deal.

Another factor is whether the available workforce is appropriate. Advocates of the project emphasize the need to create good-paying jobs for people who live nearby. Despite widespread poverty and unemployment, they say a pool of skilled workers remains in the neighborhood — people who used to work at companies such as A.O. Smith and Master Lock, and can step into family-supporting, skilled manufacturing jobs if they become available.

A 2011 study by Cross Management Services, Inc., provides at least some support for this claim. It found 25,215 persons of working age in a 6.4 square mile area near Century City. Nearly three-quarters of them had at least a high school education. Of those working, 14 percent were in the manufacturing sector.

Timm said he’s looking for visible evidence of progress at Century City within five years. If the site is filling in with new buildings by then, it would reasonable to conclude that the city’s initiative was successful. Whaley-Smith is optimistic. He said that the success in developing the Menomonee River corridor proves the city has the expertise and commitment to succeed in the challenging, competitive world of urban commercial redevelopment.