The real estate tycoon and owner of Stevens Point Brewery has one of the grandest mansions in town. 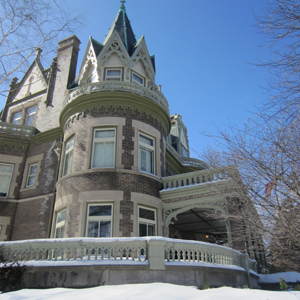 The 1896 mansion owned by Jim Wiechmann was the first home constructed on grand E. Newberry Boulevard, though it was left unfinished by Atty. Benjamin M. Goldberg, who ran out of money after being disbarred for 19 charges of  “compounding felonies, extortion, blackmail and false testimony.” Nowhere in the nation had there been a disbarment proceeding “where an attorney stood charged with a series of such grave offenses,” said a report of the time [1897]. Here is a 19th century example of a phenomenon that still stings in the 21st century — real estate speculation gone wild, an investor in over his head, a showy mansion incomplete.

Goldberg had a $30,000 budget for the construction of the home, which he apparently financed with a series of rackets in Waushara County, where he once served as District Attorney while practicing law in Milwaukee and serving as Attorney for the new city of South Milwaukee, incorporated in 1892. He built his ephemeral fortune by extorting small sums from victims by threatening lawsuit by unnamed parties and other sharp practices. In one case, he got $50 threatening to sue a man that he heard had had a dalliance with another’s wife, claiming to represent the aggrieved husband.

The residence financed by this petty piker and finished by the succeeding owner was described by Judith Knuth in the Milwaukee Journal in 1987 as “bustling with crockets and finials, awash in tracery, balustraded to a fare-thee-well, its Gothic elements … nearly overpowered by the ample proportions of its plump Victorian bays and porches.”

Since 1980 it has been the home of real estate investor Jim Wiechmann and his wife Susan Wiechmann, and has been featured in magazine articles, was the site of the Historic Milwaukee “Over the Top!” fundraiser in 2011, and served as a stop when Antiques Roadshow was in town taking a look at the world’s largest collection of posters by Jules Cheret, which hangs on the Wiechmanns walls when not on loan to art museums.

It truly is a grand estate, with 6,826 sq. ft. spread over two floors and a finished, 1,348 sq. ft. attic. There are seven bedrooms in the residence, along with 3-1/2 baths. It is kept toasty in season by warm air heating, and is cooled in the summer by the gentle breezes of Lake Michigan and the occasional window air-conditioning unit. Why, even some of Wiechmann’s tenants enjoy central air-conditioning, but not this humble citizen! The half-bath is located on the first floor, an extreme rarity at the time. Another example is in the Kalvelage Schloss, constructed for a plumbing contractor who likely supplied the Goldberg mansion.

The home was part of the Prospect Hill subdivision, platted by the Prospect Hill Land Company in 1893. Partners John George and Edward P. Hackett, with other investors, sunk $160,000 into paving, sidewalks, curb, gutter, water and sewer in the area bounded by what is now N. Downer Ave., N. Lake Drive, E. Kenwood Ave. and E. Park Place. Yet by 1898 only five homes had been built on N. Lake Drive, with no new construction on that street until 1914. The neighborhood itself was not completely built-up until the approach of the Great Depression. The investors, who had hoped to be in and out in a couple of years, finally turned a profit around 1911, by which time the state had imposed an income tax. The developers argued at the Wisconsin Supreme Court that the distributions to their shareholders were not taxable income. The court didn’t buy it.

E. Newberry Boulevard was recognized in 2009 as one of America’s 10 “Great Streets” by the American Planning Association, joining such noted thoroughfares as Broadway Street in Skagway, Alaska, Haddon Avenue in Collingswood, New Jersey, and President Clinton Avenue in Little Rock, Arkansas. It was added to the National Register of Historic Places on March 7th, 2004. Ald. Nik Kovac used to play football on the ample median, as a youth, using the trees as handy goal markers. Now it is but one part of his vast domain.

How Milwaukee is it? Distance to City Hall about 3 miles on foot, a leisurely 4 miles by auto on scenic N. Lincoln Memorial Drive.

Fun Fact: According to city records, this giant home has no fireplaces. That is, no wood-burning fireplaces. In fact it has 8 gas-fired fireplaces. These devices, new to the era, joined such other nowaday commonplaces as indoor plumbing, central heating, gas stoves, electricity, and telephones in residential construction, especially of the luxury sort.

Some of the home’s chandeliers were melted down into ammunition in World War I. These were of the now-rare combination gas-electric style, bought by those hedging their bets that electric lighting was a passing fad.

What Happened to Goldberg? After being disbarred in Wisconsin, Benjamin M. Goldberg became a Chicago attorney, where his crimes did not fall beneath the standards of his profession as practiced there. He was arrested in Wisconsin in 1904 for passing a bad $50 check. 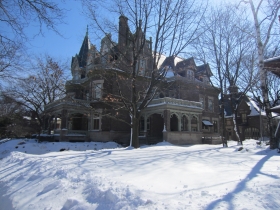 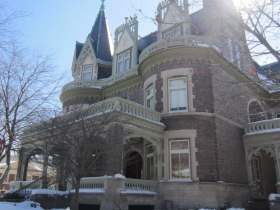 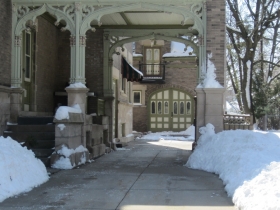 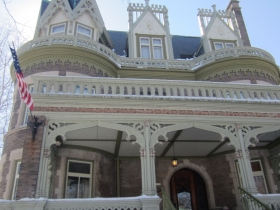 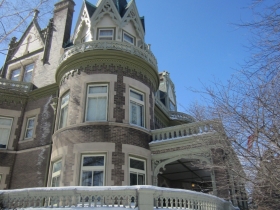 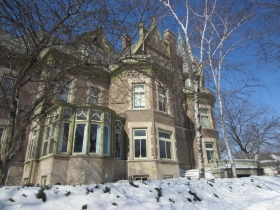 James Lester Wiechmann is the founder and president of Wiechmann Enterprises, LLC. A list of Wiechmann’s properties occupies several pages on the internet, with extensive holdings in the UWM neighborhoods not far from his home, where the firm operates out of basement office space, using its N. Summit Ave. address.

Wiechmann is a graduate “with honors” of The Milwaukee School of Engineering. He worked as an engineer at Ladish Corp. and elsewhere, discovering that his engineering skills would transfer nicely to the field of real estate, with its myriad complications and systems created by architects and left for engineers to maintain and fix.

Once everybody started bringing in wine and chairs, Jim Wiechmann set up a table in the northwest corner of Cathedral Square during Jazz in the Park, supplying friends with cigars from his stash and free beer from the Stevens Point Brewery, which he and partner Joe Martino bought in 2002. Infusion of over $4 million in capital improvements brought the brewery to a 2012 capacity of 120,000 barrels. A fourth expansion, announced in January, 2013, is to cost $2 million and will bring the brewery’s capacity to 150,000 barrels when completed in May, 2013.

When Jazz in the Park management cracked down on carry-ins, Wiechmann made himself scarce from that event. But you can still find him out and about.  To this day, Wiechmann is known for hanging around some of Milwaukee’s more colorful places. He and his associates, often younger men just getting into real estate, would spend long Saturday afternoons at the Five and Ten tavern (now Brocach Irish Pub) sipping beverages, smoking big cigars and trading tales. The ubiquity of Point beers on tap at Club Charlie’s in the Third Ward is testament to Wiechmann’s frequent visits there, and he is a reliable fixture Thursday evenings at Shakers Cigar Bar where he and his cronies, including investors Joel Lee and John Savage, hang out and tell their stories from the near end of a burning stogy. Wiechmann just leased a property at 1632 N. Water Street to Dan Fitzgibbons who plans to turn the old O’Brady’s into The Curve, a dive bar of just the sort that would appeal to this man-of-the-people landlord.