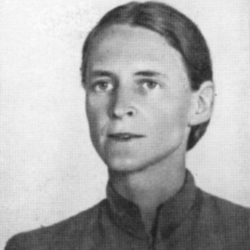 A petition is being circulated to rename a Milwaukee Public School after a local woman executed on Hitler’s orders.

Seventy years ago this month, Milwaukee native Mildred Fish Harnack was sent to the guillotine in Germany, becoming “the only American woman executed on the direct orders of Adolf Hitler for resistance activities in Germany during World War II,” according to a petition distributed by Atty. Art Heitzer, who has worked since 1985 to find a suitable commemoration of the woman and the deeds that led to her execution.

Dr. Harnack and her German husband Arvid Harnack met at the University of Wisconsin, and were living in Germany when Hitler came into power in 1933. They were part of a group of intellectuals working against Hitler from within the system which the Gestapo called the “Red Orchestra.”

Although Harnack and her husband appeared on a German postage stamp, and a Berlin school is named after her, [the kids made a field trip here last October] recognition is very slow in coming in her home country and city.

This is largely an artifact of the apparently still-smoldering Cold War, since the Red Orchestra reported to Moscow, and the Harnacks were guilty of what J. Edgar Hoover would call “premature anti-Fascism.” It seems the FBI was suspicious of people who would fight Fascism while it still had its baby teeth, instead figuring it better to wait for the beast to grow fangs before engaging it in battle.

In the late 1940s the FBI had concerns that a recognition of the Harnacks’ efforts by the Daughters of the American Revolution could be used for propaganda purposes by the Communists, just to give you an idea how crazy things were. The American Legion was outraged in 1987 when Heitzer got the legislature to recognize a remembrance day in her honor on her birthday, September 16th, with the state commander claiming that Harnack “renounced the free, democratic society that now honors her.”

It didn’t help that the Americans felt that the Harnacks were Communist dupes, while the Communists overstated the Harnacks dedication to communism. [See “Resisting Hitler: Mildred Harnack and the Red Orchestra”].

Documents declassified since the fall of communism have revealed a far more nuanced view of the Harnack’s political activities, and of her contacts with the state department that led to the identification of millions of dollars of German assets in the US.

Heitzer hopes to sway the directors of the Milwaukee Public Schools to give “an appropriate MPS school building … her name,” and has entered a resolution on the agenda to that effect.

The board’s Accountability, Finance and Personnel committee will meet on Tuesday, March 19th 2013 to hear this matter at the MPS Central Office, 5225 W. Vliet St.

Leslie Hindman Auctioneers is nearing its second year with a Milwaukee office, a cramped space at 414 E Mason St. and has now announced it will open a separate auction facility at 525 E Chicago St., a Third Ward thoroughfare named after the toddlin’ town where the firm has its headquarters. The new space is expected to open this spring, perhaps in time for the April 18 Milwaukee Spring Auction, for which consignments are being accepted at this time.

Hindman also announced the appointment of Judy Rauh to the “Business Development” team in town. She replaces Heidi Von Hagke, “who has moved on to new things.”

Rauh knows her way around town, being a native, and has bought and sold from Hindman in the past. “I have spent a lot of time in Chicago the last few years where I have gotten to know Leslie and her dynamic firm,” Rauh tells me. “I look forward to working with the Milwaukee team to expand our reach.”

The new auction space is in a remodeled warehouse developed by Robert Joseph just across N. Jackson St. from the Italian Community Center, which will afford the staff a convenient location for luncheon and an opportunity to study the many things of an art-like nature hanging on the walls there.

In other changes, the old Imperial Lithographing Co plant at 914 E. Hamilton Street has been renamed Hamilton Stables and is for sale for $600,000 according to a listing. Two floors of windows were revealed on the north side of the 18,000 sq. ft. structure when cinder blocks were removed, with workers barely beating gravity to the punch. It would make an interesting artists’ space. Current owners, led by Michael Olson, have done the same thing with the Nut Factory, 3720 N. Fratney St., which usually has an open house around this time each year.

U.S. Sen. Ron Johnson, U.S. Rep. Paul Ryan, Gov. Scott Walker are scheduled to speak at Conservative Political Action Conference 2013 on March 14-16th 2013, along with Mitt Romney, (making his first public appearance since the election), Jeb Bush, Sarah Palin and more. The conference is organized by the American Conservative Union, established in 1973, which had Ronald Reagan as its first guest speaker.

Exhibitors will include the Ayn Rand Center for Individual Rights, America’s Survival, Inc. [“Obama perfect synthesis of Islam, Communism”] ProEnglish, Stacy’s Got Greek [sorority and fraternity gear!], P. C. Button Company [couldn’t find them, but probably not the Planet Cazmo Button Company “run by Goopergoop and Rocked01, a.k.a Stonez. “], and the Network of enlightened Women [“NeW”], an organization for conservative university women who will be a week into their “Gentleman’s Showcase” contest by the time the conference starts. The “enlightened” (notice no capital “E”) women say, “today, gentlemanly behavior is undervalued, resulting in a decline in chivalry,” and they plan to do something about it by finding and anointing a hunk with their “showcase.”

It seems that contests provide a great deal of diversion for the Tea Partiers, since the Conservative Political Action Conference is offering cash money prizes in its own competition. It’s a You Tube contest for best video on the topic: “Future of the Conservative Movement: Timeless Principles. New Challenges.” Fun already!

According to the rules, organizers “strongly encourage creative and fun submissions.” Well, they didn’t get any of those, and any amusement derived from the four submitted so far is purely unintentional. Students of video technique will find that an American flag makes a handy prop. Grab your flag and get your entry in by February 28th. Here’s the link!

Jake’s Deli is holding a Corned Beef Eating Contest at the Shops of Grand Avenue noon Friday, March 8th, in conjunction with the Westown Association. The food fest will feature six contestants who must get their applications in today, February 27th 2013. [Here is a link for that] Nothing says “Friday during Lent” like a couple pounds of Kosher Corned Beef! The tasting will follow a press conference about the St. Patrick’s Parade, which will kick off downtown at noon on Saturday March 9th 2013. That is the same time as the Wisconsin Artisan Food Producers Association Inaugural “Taste and Learn Artisan Food Event,” scheduled to run until 4 p.m. at Kasana — The Gallery, 241 N Broadway, the former location of La Boulangerie for you Third Ward vets.

Correction: A previous version of this article incorrectly indicated Mildred Fish Harnack was executed sixty-five years ago. She was executed in 1943, or seventy years ago.