How to Bridge the Health Care Gap

Experts discuss how to reduce health disparities between rich and poor, and the city's high rate of black infant mortality.

By Edgar Mendez, Milwaukee Neighborhood News Service - Feb 18th, 2013 10:00 am
Get a daily rundown of the top stories on Urban Milwaukee 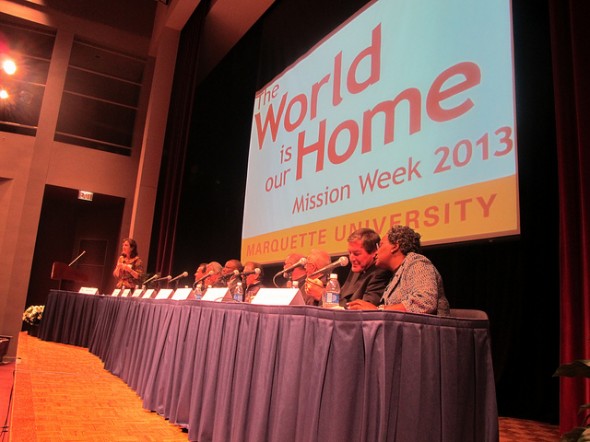 A panel discussion on health disparities was part of Mission Week at Marquette University. (Photo by Edgar Mendez)

The poorest Milwaukeeans also have the poorest health, and Milwaukee is not alone in the wide health disparities between rich and poor.

Included on the panel, moderated by Meg Kissinger of the Milwaukee Journal Sentinel, was Brother Stan Goetschalckx, F.C., a 2007 Opus Prize winner. He is the founder and director of the AHADI International Institute in Tanzania, which aids refugees from war-torn countries in Africa. Goetschalckx said that the key in Milwaukee and throughout the world is to learn to work with people as they are. He explained that everybody has qualities and limits, but everybody also has the ability and responsibility to make good choices in their lives.

“Our job is to tell the people that you can do it, you can get over it.  …You have the strength to transform negative and positive, weakness and strength,” said Goetschalckx.

Dr. John Bartkowski, CEO of the Sixteenth Street Community Health Center, 1337 S. Cesar E. Chavez Dr., agreed that self-empowerment is one of the keys to reducing health disparities. He added that his clinic sees many people who are very poor, some of them immigrants. Eighty percent of the state’s Latinos live in the two ZIP codes served by the clinic. To be effective in serving that population, health care providers need to be persistent. 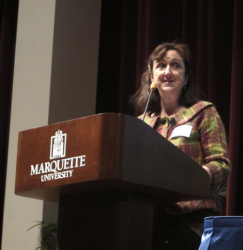 “You’re not going to make many changes in a person’s life at one moment, so it takes much time especially when it comes to health … you have to work with that one person at the point they are in their life to make changes,” said Bartkowski.

Bartkowski also suggested that Marquette students go to poor neighborhoods to work with residents. For example, he challenged Marquette’s School of Dentistry to put a dental clinic in a low-income area.

Dr. Earnestine Willis of the Medical College of Wisconsin noted that the whole community must take ownership for health equity efforts to succeed.  She said that one of the many challenges in reducing disparities is that programs and resources continually come in to poor neighborhoods but don’t stick around to ensure that the impact of the programming is maintained.

“I teach my residents and students that its important that the community take ownership and that’s critical for maintaining the impact of what community organizations set into place,” Willis said.

As far as what can be done right here, right now to make a difference, most of the Opus winners echoed earlier sentiments of empowerment and engagement, adding one important aspect that reflects their faith-based backgrounds.

“We have to walk side by side with the poor,” said Dr. Nelson Neumann, son of the late Dr. Zilda Arns Neumann, who won an Opus Prize for her work with the Pastoral da Crianca. Pastoral da Crianca is a group of volunteers and community leaders who address family issues including infant mortality among the poor in Brazil and Latin America.

Goetschalckx added that people in the community need to be more humble and enter and live in worlds with people who have less and learn from them.

“We need to see each other as brothers and sisters of the same home and cultivate the real values that are important in life,” Goetschalckx said. Those values are hospitality, welcoming, giving and serving, he added.

The infant mortality rate for African-Americans in Milwaukee is among the worst in the nation and comparable to rates in some third world countries. Black infants in Milwaukee die at more than twice the rate of white infants, according to a 2011 report by the Center for Urban Population Health.

As for solutions for eliminating health disparities, Willis said that the short-term goal should be to ensure that every citizen has a health care promoter. The long-term goals should be to give those citizens a voice in their own care, and to switch to prevention rather than a treatment model of care.

“All these systems will need to connect for families to be healthier and better off,” Willis added.