The Problem with Icy Trails

The city and county do a much better job of plowing and clearing streets than bike trails. That won't change until bikers start complaining.

By Dave Schlabowske, Bike Federation of Wisconsin - Feb 1st, 2013 09:00 am
Get a daily rundown of the top stories on Urban Milwaukee 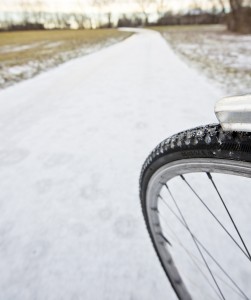 That is a light dusting of snow over a sheet of ice from one edge of the Oak Leaf Trail to the other. Click on the photo to see a larger version and you will spy my secret weapon for ice trail biking.

OK, so I know Milwaukee had a freezing rain last weekend, but a week later why am I still riding a ribbon of ice all the way to work? While the roads have been salted and are 95% dry pavement, the entire Oak Leaf Trail and Hank Aaron State Trail are like frozen rivers snaking around Milwaukee. I don’t remember the trails being so completely iced over in the 17 years I have been biking to work through the winter.

Yes, I could choose to ride the roads to work, but I like the trails so much more. They are more direct than the roads, and I love the solitude and scenic views through the parks and prairies along the Menomonee River. My secret weapon that allows me to ride my bike safely on icky trails are studded tires front and back.

For the last five years or so I have run Nokian A10s carbide studded tires on my commuter bike as soon as we get the first hard freeze, and I have not fallen since I started using them. Schwalbe Marathon Winters are also excellent, as they have carbide studs too. I would not waste my money on cheap, non-carbide, studded tires. They wear out quickly. Sure good studded tires are a bit pricey, but I consider them cheap insurance against broken collar bones and sprained wrists. 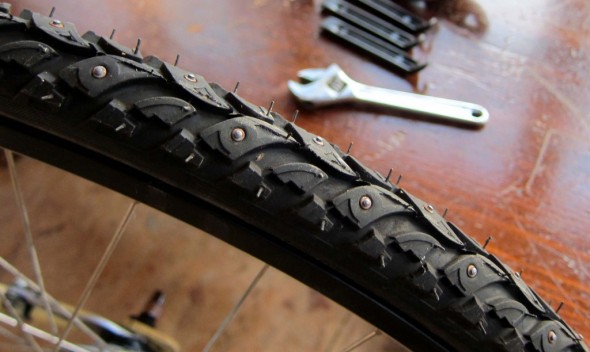 If you click on this photo to enlarge it, you can clearly see the carbide studs in the tire. Photo by d’Andre Willis (we miss your guest posts and comments d’Andre)

I asked my coworker Jake, who also bikes everywhere he goes all winter long, how he has managed the ice. He runs Panaracer Ribmo tires on his commuter bikes. Jake told me he has been forced to take Canal Street instead of the Hank Aaron State Trail because of the ice on his route as well. Jake comes from the East Side, so he would normally get on the Hank Aaron at Canal and 6th to ride. He would then ride the trail west, over the river and through the Valley Passage to the Bike Fed office at 36th and Pierce St. (I know, you thought I was going to say to grandma’s house).

While it is not any further out of his way to ride Canal Street, and Canal is not very busy, even during rush hour, it is a drag that he can’t ride the trail.  It just makes us feel like second class citizens. We both pay the same snow and ice removal fee that our car driving friends do, but we don’t get much for our money. The City does a very good job of salting and plowing all 7,000 lane miles of city streets (that includes multi-lane roads and parking lanes). But I don’t need the city to plow the parking spots for about 8 cars around my house (I live on a corner lot). I would prefer for them to plow and salt the trails with my money, as they and the county are best equipped to do so. 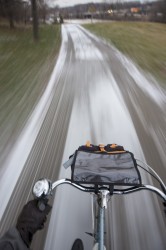 You can see that a County vehicle drove on this section of trail, but didn’t bother to salt. Those tire tracks are not clear pavement, just smoother ice with the snow pushed off.

To be fair, the Oak Leaf Trail is the county’s park and the Hank Aaron State Trail is obviously the State’s job. The WDNR did sign an agreement with the city promising to keep the Hank Aaron clear of snow and ice along Canal Street where it functions as a sidewalk, per city ordinance. The problem is the WDNR does not have the equipment or staff to plow or salt the trail. The trail manager has tried hard to work with abutting property owners, and some of them generally do plow, but the piecemeal approach to clearing a linear trail ends up leaving impassable gaps. A couple of years ago I did a blog post with photos of what this looks like.

The county has been doing a better job of clearing snow on the Oak Leaf in recent years, but again, it is spotty. Some trails get cleared well, others not at all. Think what it would be like if our roads were treated the same way. You might be driving down Wisconsin Avenue, and suddenly at 16th Street, the road is no longer plowed or salted. There would be cars piled up and people trying to do U-turns in the street. It would only take one experience with that and people would stop driving on Wisconsin Avenue.

I think that is what is happens with many people who try biking to work in the winter. They find the trails and bike lanes are not cleared of snow, so they give up. 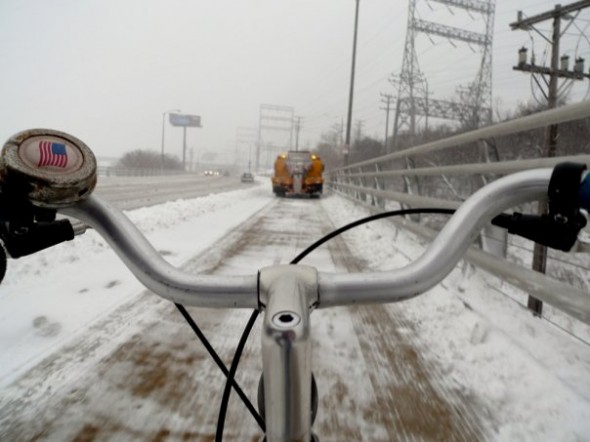 Getting it right: I remember the one time I pedaled home behind a City of Milwaukee DPW truck clearing the snow on the Hank Aaron State Trail.

I have written about this issue in the past. I completely understand that our government does not have any extra money lying around in piles, but I think it is unconscionable not to clear the trails given how little extra money that would cost and the tremendous benefit cycling has in our community. Other cities like Madison do a much better job of clearing trails, many of which are plowed before the streets. 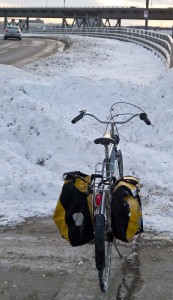 Getting it wrong: What would people do if this happened to them when they drove a car?

This is just another example of our sense of priorities as a community. You can’t really blame the Dept. of Public Works for all this. They don’t set the priorities, our elected officials do. And our elected officials do what we as voters ask them to do within the bounds of law and the money we agree to pay in taxes and fees. So it seems the buck stops with us. In Milwaukee, there are just not enough people who ride bikes asking that their trails be cleared of snow. Don’t even get me started about sidewalks and our responsibilities to people with disabilities…

Alright, I got my rant out, so what can we do about it?  The simplest and easiest thing to do for anyone who cares about the issue is to call, email or write to their elected officials and express their frustration with the current snow and ice removal priorities. I have done this. I have also spoken to the people at the Dept. of Public Works and the WDNR. But I am just one person, and everybody is already used to me calling and voicing my opinion. They think of me as the crazy guy who wants to ride his bike all winter.

What we need is more crazy people. If lots more people asked that the trails be cleared of snow and salted when they are icy, it would happen. Now that the Bike Fed is reorganizing around local advocacy programs, we might be able to start a Milwaukee campaign to get better snow removal on or trails. But don’t wait for us, please, if you believe it is just as important to clear our trails and sidewalks as our roads and highways, as Bob Dylan said, you gotta tell somebody.