For 100 years the Public Policy Forum has worked to improve the efficiency of local government. Jeff Bentoff's new book recounts its history. 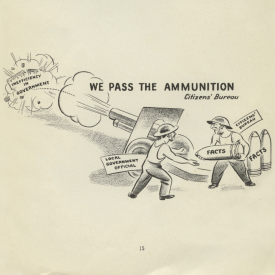 Except for the rather elaborate wording, the headline could have come from any newspaper today. But the Milwaukee Sentinel article ran nearly 100 years ago – on November 14, 1913.

The article described students who had not learned fundamentals and concluded with both sarcasm and exasperation: “Outside of this, there is nothing the matter with the public school system of Milwaukee, and the curriculum is all that could be desired.”

Coincidentally, such longstanding frustration with local government had already led Milwaukee’s leading businessmen to call a meeting for that same afternoon. They would launch a new group dedicated to using impartial, scientific methods to finally begin to fix persistent problems with Milwaukee government efficiency and effectiveness – and maybe finally put an end to such bad news in the morning paper.

Thirteen of Milwaukee’s top businessmen, some of whom were members of industrial dynasties, gathered at 4 p.m. later that day in November 1913 for the first meeting of the new Milwaukee Citizens’ Bureau of Municipal Efficiency, the group they were forming to improve city government.

They also elected a board and 39 dues-paying “associates” of the corporation, many whose last names remain associated with Milwaukee history today – Pabst, Uihlein, Plankinton, and Gallun among them. The group was to be funded with a budget of $10,000 annually for three years, with 20 subscribers paying $500 apiece. It was the beginning of an organization, today known as the Public Policy Forum, that has for 100 years pushed to improve the efficiency and responsiveness of local government. 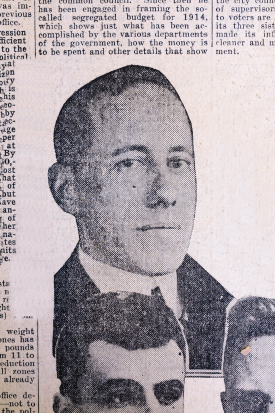 Thomas L. Hinckley was a logical choice to head the new Bureau, with prior positions in the country’s burgeoning efficiency bureau movement – greatly heralded in its day, but now largely forgotten. The movement, started earlier around the beginning of that century in York City, was intended to counter corruption, cronyism, and incompetence common in local governments around the country, including Milwaukee’s. Professionalism and standardization that served as the foundation for businesses were often lacking in government. Progressives, Socialists, and business leaders alike were behind the movement’s ideals – they all opposed government waste, fraud, inefficiency, and ineffectiveness and supported an objective, fact-based approach to improving and running government.

Milwaukee got its firsthand taste of the efficiency movement thanks to local Socialist politicians. In 1910, Milwaukee’s first Socialist mayor, Emil Seidel, and the Socialist-leaning Common Council created a city-run organization, the Milwaukee Bureau of Economy and Efficiency (MBEE). Despite its productivity, or maybe because of it, the MBEE was eliminated when the Socialists lost the mayor’s office and council seats in the next municipal election in 1912. Opposition candidate Gerhard A. Bading became mayor, and he and other new non-Socialist leaders quickly shut down the MBEE as a vestige of the Socialists.

The “Milwaukee Citizens’ Bureau of Municipal Efficiency” (became) a reality on paper, with five business leaders signing its articles of incorporation on May 26, 1913. The group’s stated legal purpose, according to the articles of incorporation, dovetailed with what would be recommended by the New York bureau (and would remain largely unaltered during the group’s next 100 years):

“To promote efficient and economic municipal government; to promote the adoption of scientific methods of managing and supervising municipal affairs and the accounting and reporting on details of municipal business, with a view of facilitating the work of public officials; to secure constructive publicity in matters pertaining to municipal problems; to collect, classify, analyze, correlate, interpret and publish facts as to the administration of municipal government…” 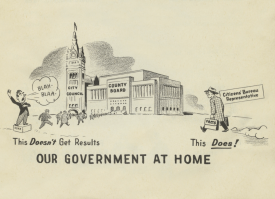 Not wishing to wait for elected leaders to truly establish a new city-run bureau, the business community had revived the concept on its own. The business leaders had created a legal entity for the new group, received the blessing (at least for the time being) of the mayor, and had a detailed list of recommendations awaiting action. And on November 14, 1913, they elected a board and officers, hired the first director, and prepared to open an office and begin the work of efficiency – work that would continue for the next 100 years.

Norman N. Gill, the group’s high-profile director from 1945 to 1984, embodied the concept of “government watchdog.”

Thanks to Gill’s recognized knowledge, objectivity, and doggedness, he and his group became as much a part of the civic landscape as aldermen, reporters, and even mayors. In fact, when Gill was unable to testify at Milwaukee’s city budget hearing in 1976, a Milwaukee Journal headline focused equally on his and Mayor Henry Maier’s absence, exclaiming: “Maier, Gill Miss Budget Hearing.” 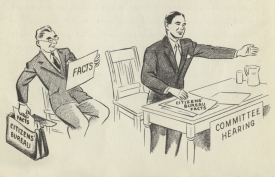 Gill oversaw preparation of more than 550 bulletins and miscellaneous reports. Documents from that period discuss the Bureau’s leadership, support, or work on a number of other efficiencies and government reforms that were enacted, including:

During the Gill years, he and the Bureau displayed tenacity in pushing for reforms that sometimes took decades to accomplish. It could be argued that without the Bureau’s bulldog mentality, the momentum needed for many of the reforms would have been lost. 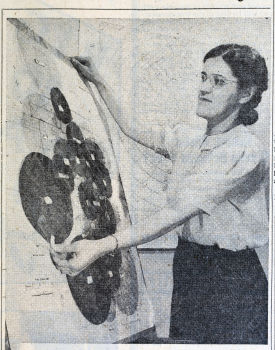 Lynagh’s first major research assignment was to conduct a survey of city playgrounds. Lynagh found that facilities for children were badly lacking, with just “17 gravel patches used as supervised playgrounds,” according to a 1963 memo she wrote summarizing her career. Her survey results appeared in a Milwaukee Journal series in the 1920s and were incorporated into official city plans. A special recreation council was created and sponsored two successful playground bond referenda. Soon, more playgrounds were created and Milwaukee gained a national reputation for having one of the best playground systems in the country. In 1963, she wrote that she happily photographed a picture of the sign on the City Hall tower announcing that the number of supervised playgrounds in the city had grown to 117.

Early in her career, Lynagh also played a key role in the consolidation of park districts. According to the 1963 memo, she produced an important study on the issue in 1932 that showed “the waste of seven duplicating park administrations in Milwaukee County, and the possibilities of a finer park system under the unified control of the Milwaukee County Board.” Lynagh subsequently directed research from 1934 to 1936 for a 30-member citizens’ committee on the issue. The unification of park districts was accomplished after three successful, hard- fought city referenda in 1936 and the work of an implementation committee on which she served.

A Milwaukee Journal editorial about her retirement that year at age 65 said: “She has epitomized why the bureau enjoys such confidence, and therefore influence, among public officials – because its facts are dependable and it sets them forth without agitating them. Her incredible capacity for researching public affairs has contributed to better local government in ways too numerous even to cite a few.”

During the past five years, the Bureau – now called the Public Policy Forum – has been determined to return to its roots.

When Rob Henken was appointed President of the Forum in January 2008, he established a goal of bringing the Forum “back to our roots” by renewing its past emphasis on local government finance and providing direct technical and research assistance to local governments.

That decision stemmed not only from his background in government, but also from his concern that local governments faced an unmanageable situation from the combination of exploding pension and health care costs and pressure on available revenue streams. To assist with the new emphasis, Henken added a full-time researcher with local government finance experience and a part-time contracted researcher with a state Legislative Fiscal Bureau background.

During the previous decade, the Forum had moved from providing annual written reviews of proposed city and county budgets to testifying at annual budget hearings. Henken reversed the trend, publishing detailed analytical reports of 15 to 20 pages annually on each proposed executive budget within two weeks of submission. 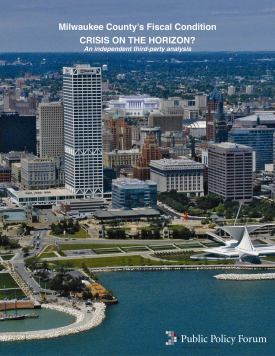 Crisis on the Horizon

Henken also started a series of in-depth reports on the finances of each major level of local government, beginning in March 2009 with “Milwaukee County’s Fiscal Condition: Crisis on the Horizon?” Over the next few years, the Forum published similarly comprehensive reports on the City of Milwaukee, Milwaukee Area Technical College, the Milwaukee Metropolitan Sewerage District, and Milwaukee Public Schools.

The “Crisis on the Horizon?” study documented the county’s fiscal problems and placed the Forum at the center of an ongoing major public debate over the future of county government. The study followed a highly controversial speech by prominent Milwaukee businessman and GMC member Sheldon B. Lubar a year earlier calling for county government to be dissolved, with its functions shifted to municipalities and the state.

In recent years, the Forum also published a series of reports on early childhood education, after the group’s board called for research on the issue. Forum research found the quality of child care lacking, with the problem in Wisconsin tied to the treatment of child care under the state’s W-2 public assistance program. With child care treated “as a work support, and not as a means of educating children,” the system was not structured to provide high-quality care, a 2010 Forum report concluded. Instead, W-2’s design had prioritized parental choice, affordability, and a quick expansion of the child care supply.

This article is excerpted from “Just the Facts,” a new history of The Public Policy Forum by Jeff Bentoff, to celebrate the non-partisan policy research group’s 100th birthday this year.  The book chronicles the organization’s roots in both the national “efficiency bureau” movement and Milwaukee’s Socialists, and its efforts to help implement local government reforms over the last century. The book can be downloaded for free.