How the migration of southern blacks to Milwaukee changed the city. An excerpt from a new book by Barbara Miner.

Winter is coming, and we can’t make it. 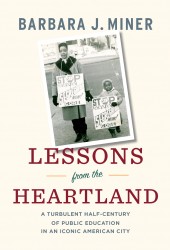 Lessons from the Heartland: A Turbulent Half-Century of Public Education in an Iconic American City (New York: New Press, 2013).

On October 2, 1944, a crowd of 3,000 people gathered at the Hopson plantation four miles south of Clarksdale, Mississippi, in Coahoma County. Eight machines quickly and efficiently picked a field of cotton in what was the first public demonstration of a commercially viable cotton picker.

A skilled field hand could pick 20 pounds of cotton in an hour. The machine picked a thousand pounds. The sharecropper system, which had provided the inexpensive labor sought by plantation owners after the end of slavery, and which was the dominant economic institution in the rural South for 80 years, was about to become obsolete. “Suddenly, cotton planters no longer needed large numbers of black people to pick their cotton, and inevitably the nature of black society and of race relations was going to have to change,” writes Nicholas Lemann in The Promised Land: The Great Black Migration and How It Changed America.

The migration of blacks to the North and West lasted from roughly 1910 to 1970, with the first substantial wave following World War I. The Great Migration, as it is called, first impacted northern industrial powerhouses such as Detroit and Chicago, where blacks gained an early foothold and, unlike in Milwaukee, had the time to develop a significant middle class.

In 1940, according to Lemann, 77 percent of black Americans lived in the South, mostly in rural areas. But then migration increased dramatically. Five million of the 6.5 million blacks who took part in the Great Migration moved after 1940. By the time the migration ended in 1970, “black America was only half Southern, and less than a quarter rural; ‘urban’ had become a euphemism for ‘black.’ ”

The Jude Family Comes to Milwaukee

Willie Jude has worked for almost 40 years in education in Milwaukee, as a teacher, principal, and administrator. He thinks of retiring and returning to the South, where he was born. But retirement is a difficult concept for someone who has worked hard his whole life. And though Jude retains deep emotional ties to the South, Milwaukee is where he built a career, married, bought a home, and raised a family.

In 1947, a few years after the mechanical cotton picker’s debut in Clarksdale, Willie Jude was the third generation in his family to be born on a plantation in Coahoma County. He was named after his father, and was the oldest of fifteen children at a time when big families were seen as essential to economic survival. “We were all sharecroppers,” he explains. By the time he was six years old, the young Jude was chopping and picking cotton. By seven years old, he was picking 50 pounds a day. The larger and more well off plantations in the Mississippi Delta had moved on to the cotton picker but, as with many revolutionary inventions, the pace of change was uneven. By 1958, 27 percent of the cotton crop of the Mississippi Delta was harvested by mechanical cotton pickers, with the number increasing to more than 84 percent by 1964. Not yet realizing that their way of life soon would be gone forever, the Jude family held on.

For much of his youth, Jude’s family moved from one plantation to another in search of work. In Tunica, the family (then numbering 15 people) lived in a four- room house. At Dubbs, Mississippi, on a small plantation with only about 50 families, members of the Jude family would chop cotton for ten hours a day, each of them earning $2.50. The plantation owner wanted to drop the children’s wages to $1.75 a day, and Jude’s mother refused, figuring that at those wages the children might as well stay home and further their learning. “It was almost like slavery,” Jude recalls of that plantation. “We only stayed one year.”

The Jude family experienced a period of relative stability from 1960 to 1966 at a small farm with only three families. But in the fall of 1966, new legislation prohibited schools from dismissing students from September till after Thanksgiving, as had been the custom so that children could help work the harvest. As a result of the legislation, the plantation owner refused to give Jude’s father any crops. “He said that the kids wouldn’t be able to harvest them,” Jude recalls. Without a crop, the family was destitute.

“Winter is coming and we can’t make it,” Jude’s father told the family.

Jude, young and resourceful, responded, “Well, your brother is in Milwaukee. Maybe he can get you a job in a packing house if you moved up there.”

Jude drove his father to Memphis to catch a bus, not wanting to take the risk of seeing him off on a local bus because the family still owed the plantation owner money. The father arrived in Milwaukee in November, got a job at a meatpacking plant, and after six weeks sent for his wife and children. “That’s how my family got to Milwaukee,” Jude explains.

Change the names, modify the dates, tweak a few of the details, and multiply the story by thousands of people, and Willie Jude’s story tells of Milwaukee’s role in the Great Migration of southern blacks to northern industrial cities, one of the seminal developments in twentieth- century America.

Milwaukee’s migration has been called the “Late Great Migration” because it occurred decades after the height of migration to cities such as Cleveland, Gary, Chicago, and Detroit. But it no less profoundly shaped the city.

In 1950, there were 21,772 blacks in Milwaukee, compared to almost 500,000 in Chicago and 300,000 in Detroit. Blacks accounted for only 3.4 percent of Milwaukee’s population that year. Two decades later, by 1970, blacks were almost 15 percent of the population and their numbers had risen to 105,088.4 (By the 2000 Census, Milwaukee had become what is called, in an odd twist of semantics, a “majority minority city.” Whites accounted for just under 50 percent of city residents, African Americans for 37 percent, and Latinos for 12 percent.)

It is not uncommon for blacks in Milwaukee to name the city from which their ancestors left for Milwaukee and the year in which they did so. After one family member moved and was settled, brothers, sisters, or cousins often followed. Small town networks were re-created. Milwaukee legislator Polly Williams, for instance, came to Milwaukee in 1946 from Belzoni, Mississippi, a Delta town an hour’s drive from Coahoma County. Monroe Swan, her cousin who also went on to serve in the Wisconsin legislature, arrived about the same time. Both families were lured by the jobs in Milwaukee’s factories, foundries, tanneries, and meatpacking plants.

Mississippi was the most common state of origin for Milwaukee blacks during the height of the Great Migration. As late as 1960, roughly half of all African Americans in Milwaukee had been born in the South, and only about a third had been born in Wisconsin.

In 1970, when the Great Migration formally ended, that enticing moniker given to Milwaukee and other northern cities—“the Promised Land”— had not yet been tarnished beyond redemption. While the black professional and middle classes remained relatively small in Milwaukee, the official black unemployment rate was only 5.3 percent. The black poverty rate was significantly lower than the comparable U.S. average, and black median income was significantly higher. The number of black owner- occupied homes had notably increased.

Black migrants to Milwaukee “seized upon the opportunity to shape a better life for themselves, and despite the odds against them, were remarkably successful,” writes historian Paul Geib. “Their collective experience represented a tantalizing moment in African- American history when it appeared that the model of mobility through industrial employment that had served the European immigrants might serve black migrants as well. It seems fair to conclude that at least in one place at one time— Milwaukee, 1940 to 1970— black Americans found it possible to go from peasant to proletarian to upwardly mobile blue- collar property owner all in one generation.”

This excerpt is from chapter five of the newly released book, “Lessons from the Heartland: A Turbulent Half-Century of Public Education in an Iconic American City” (New York: New Press, January 2013; reprinted with permission.). Author Barbara Miner is a free-lance journalist and former managing editor of Rethinking Schools. The book covers a range of inter-connected issues, encompassing not only education, but also jobs, housing, and the city’s changing demographics.