The ex-NBA star's cute place on Pleasant Street has been the source of unpleasant noises.

The first day of 2013 brought a spree that did not go well for Milwaukeean Latrell Sprewell, who was briefly taken into custody after repeated noise complaints at his home, according to a report in the Milwaukee Journal Sentinel . House Confidential, intrigued that a former NBA player was causing a ruckus on the otherwise sedate E. Pleasant Street, went to the scene of the crime to see how the mighty have fallen. Sprewell had previously attracted attention to his former home at 850 W. Dean Road, River Hills, lost  to foreclosure in an action commenced in 2009, and another one at 3170 E. Hampshire Avenue,  in Milwaukee bought for $1,150,000 in 2006, then lost to the bank in foreclosure, and most recently sold in 2011 for $450,000. Sprewell also lost his boat to foreclosure, and owes over $650,000 on that vessel, where at least, if he made noise, nobody but yacht clubbers would be inconvenienced.

But things are different on Pleasant Street, where Sprewell’s new digs are not insulated by grand lawns or the lapping waves of Lake Michigan.

The home, constructed in 1925, is an anomaly in the neighborhood, where immediately adjacent buildings tend to be a good half-century older. Around the corner on N. Franklin Place the only buildings of that vintage tend to be large apartment structures. But to find a bungalow on the lower East Side, which had mostly been built up by the time the style came into fashion, is quite rare, since most such structures were built on virgin land in what was then the outskirts of the city.

Sprewell rents the place. The owner of the property is listed as Elizabeth D. Rubin, who paid $385,000 for the place in 2005. It is now valued at $307,100, and the taxes are up to date. It is a former duplex reconverted to single family living, offering 2044 square feet of finished living area. It includes 3 bedrooms, two full baths (what do you expect from a former duplex?), a fireplace and a detached garage, in front of which Sprewell parks his SUV.

Previous residents included Betty Puccio, former president of the Italian Community Center, and Dean Cannestra, a local restaurateur who hung an old family photo of the place on the walls of his Libiamo’s restaurant at Schlitz Park. 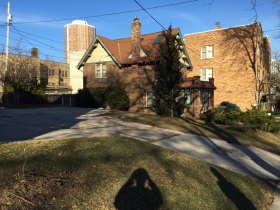 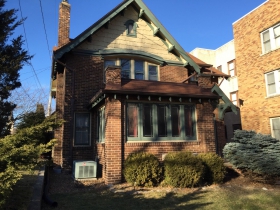 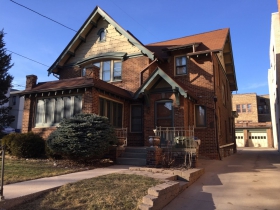 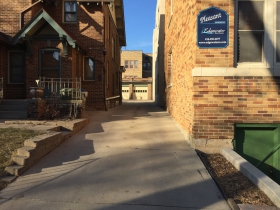 Fun Fact: Court records show Sprewell owed more than $3,000,000 to the State of Wisconsin in back taxes, and indeed he edged out former Bucks player Anthony Mason for the top spot in the state’s 2011 list of top 100 tax scofflaws. However the state’s list of taxpayers with $5000 or greater delinquencies shows that Sprewell has whittled his debt down to $110,000.

Bonus Fun Facts: Also, a check of the Milwaukee Municipal Court System records on January 2nd showed the citation issued to Sprewell. However, this citation no longer appears. But HiSprewell does have upcoming court dates for other tickets issued to him at the residence, including for noise complaints, and interference with issuance of a ticket by a police officer.

Historic Note: President Grover Cleveland was given a tour of Pleasant Street during his visit to Milwaukee in October 1887.

How Milwaukee Is It? The house is 1.23 miles from City Hall, and 1.59 miles from the Municipal Lockup.

Latrell Sprewell transformed from a three-time NBA All-Star to an NBA legend for all the wrong reasons on December 1st, 1997 when he choked Golden State Warriors head coach P.J. Carlesimo during a team practice (and came back 20 minutes later to continue the attack). Following an arbitration case he was ultimately suspended without pay for the remainder of the season.

The trouble didn’t stop there for Sprewell, despite not receiving $6.4 million of his scheduled salary as part of his suspension. In 1998, he was forced to spend three months under house arrest for a reckless driving arrest (three days before the arbitration decision) where he was reportedly speeding in excess of 90 miles-per-hour and forced another driver off the road.

His success on the court is made more confusing not only by the fact that he only played one year of varsity high school basketball, averaging 28 points a game for Washington High School as a senior. He received the Jack Takerian Award, an award given annually to an area senior who displays good character and respect. Yet he did not get a scholarship offer from a Division I program, and would spend the next two years playing for Three Rivers Junior College before transferring to the University of Alabama for his final two years of eligibility.

Sprewell was drafted by Don Nelson and the Warriors, and his career there seemingly hit a dead end after the season ending suspension. He bounced right back the next year though, following a trade to the New York Knicks in the lockout-shortened 1998-99 season. He was a key player on the Knicks team that would lose to the San Antonio Spurs in the NBA Finals. He would eventually be named to another All-Star team before being traded to the Minnesota Timberwolves where he perhaps unintentionally ended his career.

Sprewell’s contract was set to expire at the end of 2004-05 season, but negotiations had begun over an extension during the season. What happened is now part of professional basketball lore and (right or wrong) an oft-used point on how out of touch professional athletes are with reality.

Sprewell was offered a new contract by the Timberwolves for $27 million over three seasons (he made $14.6 million the previous year, the 9th highest in the league but was 34 and past his physical peak). Regarding his decision to turn down the offer and demand a trade, Sprewell was quoted by the St. Paul Pioneer Press saying “Why would I want to help them win a title? They’re not doing anything for me. I’ve got a lot at risk here. I’ve got my family to feed.”

Despite averaging over 15 points-per-game the previous season, Sprewell would never earn another dollar playing basketball in the NBA following the 2004-05 season. – Jeramey Jannene

Sprewell’s contributions to popular culture are far from just what he accomplished on the court. He has blessed the zeitgeist with an oddly named yacht, the “feed my family” quote, being named dropped in songs, and perhaps most lasting, helped popularize “spinners” or “sprewells” (spinning wheel covers).

His 68-foot yacht, which he eventually lost in foreclosure, was named “Milwaukee’s Best.” The $1.5 million yacht shared a name (and font) with one of the cheapest beers Miller produces (commonly referred to as “Beast”). Sprewell’s yacht made the news a number of times. He reportedly broke his hand falling (or as was rumored, fighting) on the boat and failed to tell the New York Knicks before showing up to training camp and getting fined $250,000 in 2002. In 2006 it ran aground by Atwater Beach and had to be rescued by a tug boat. Later in 2006 he was investigated for reportedly choking a woman while he had sex with her (he was not charged).

Sprewell, through his firm Sprewell Racing, helped popularize spinners (which came to be referred to as sprewells). He endorsed the spinning rims on a 2001 episode of MTV Cribs (the logo for Davin Wheels who was marketing the wheels was blurred). Sprewell’s store installed a number of the spinning rims. The spinners even made their way into his shoes.

What was his music choice for his New Year’s Eve celebration? We haven’t learned that, but it might have been one of the many songs he’s referenced in. “Like Sprewells on a Wheelchair” by the Dillinger Four, “Death Penalty” by The Game, “Banned From T.V.” by Big Pun, “Ali Bomaye” by Game, “Tony Montana” by Cormega, and “Adrenaline” by Cam’ron. – Jeramey Jannene