A world traveler with 25 years experience framing art, Lalonde is a survivor in a tough economy. 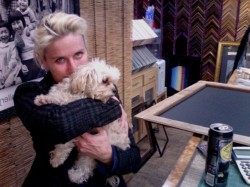 Her South Shore Gallery & Framing has been located at 2627 S. Kinnickinnic Ave. since 1993, and she lives in an apartment in the back of the building, a two-story brick structure which was cobbled together in the late 19th century.  Draw a diagonal line from her store and you’ll land at Hi-Fi Café just across “KK,” as the locals have long referred to Kinnickinnic. There’s a large liquor store directly to the east and beyond that the golden arches of McDonald’s. To the south, in the next block, are a number of small businesses, including the Honey Pie restaurant, with its finger-licking fare. “One of the bakers there, used to be a framer,” says Lalonde.

Kinnickinnic doesn’t exactly roll off of one’s tongue. It’s the Ojibwe name for “bearberry,” a tasteless berry in northern climes that Native Americans used for medicinal purposes, and when mixed with other ingredients, was smoked. The name also signifies “mixture,” and it’s fair to say that Bay View is a mixture of ethnicities and lifestyles and architecture, the latter ranging from 19th century to contemporary. When John Norquist was Mayor, he often traveled around town with a slide show trying to convince folks that KK should be narrowed in order to slow the traffic and bring a neighborhood feel to the strip. That didn’t happen, but it doesn’t mean things aren’t happening. KK is booming, with new businesses and restaurants and bars.

The building Lalonde occupies has space for two additional businesses; one of them, currently empty, was a very popular spot for model train buffs. The other is funky Bay View Styling, its storefront windows filled with this and that. The media, ever hungry for tags, describes Bay View as hip. Lalonde views it as “a perfect neighborhood for myself and my business.” She feels it’s unique because the neighbors support each other in hard times; otherwise, she says, her business would not have survived the economic recession. Many of her “framer friends,” she says, fled the business have fled in the wake of the economic downturn.

The north wall of her neat little 20’x 30’ store is stacked with framed pieces waiting for clients to pick-up, though Lalonde will also deliver the finished product in her 2003 Honda Element, a slick cross between a delivery truck and a swell sedan. Her two dogs, wee white Theodore and big white Max, take up quite a bit of space when they lounge and sleep on the hardwood floor in the display area. You might worry about stepping into a space where big Max is sleeping, but clients come and go and Max sleeps on.

Lalonde’s Bay View and Milwaukee roots run deep. She was born at St. Joseph’s Hospital in 1960 into a family of ten kids. She attended Potter Avenue grade school in Bay View before re-routing to Wauwatosa and Germantown. She claims all of her siblings are entrepreneurs, including her twin brothers, Mark and Mike, who operate Lalonde Contractors in Bay View.

Following her 1985 graduation from the Milwaukee Institute of Art & Design, Shelly put her graphic design degree to good use and went to work in local small galleries where she learned the art of framing. Then she lived as an American in Paris while attending the American Paris Academy. Enter a boyfriend who she followed to Athens and a gig as a designer for a Greek company, which led into designing t-shirts and menus, before she was off to South America. She also fished in Alaska and lived in Seattle, and somewhere along the way became a single mom, mother of 20-year-old Indie, herself now a student in MIAD’s painting and integrated art program. A tryptich of Indie’s paintings wait for Lalonde’s framing expertise.

By now, Lalonde can boast more than 25 years of experience doing custom framing. She offers more than 2,000 frame samples from over 40 different vendors to choose from. Some of the more noteworthy things she’s framed, she once told the Bay View Compass, include “a seven-foot, four-panel world map puzzle; an African death club (a collector’s item); a conch shell; and a Halloween-house cookie, which was carefully sealed.”
Lalonde also sells some art and has exhibited student art. Her front windows are filled with small colorful “Beasties” prancing around a selection of framed posters depicting Milwaukee neighborhoods. The Beasties were consigned to her by Todd Pearson, the son of Dennis Pearson who designed and produced the originals. Meanwhile, two real beasties, the aforementioned Theodore and Max snooze on.

Lalonde sometimes thinks of returning to school to earn her M.A. in painting, but her business keeps her too busy. The dogs shift positions near a framed Gallardo t-shirt and a wild green skull decorated with a bird motif. Bay Viewer, Erin Wolf (deejay and Music Director for WMSE), strolls in with posters of local bands, Field Report and Painted Caves. “This is the album cover for Painted Caves’ new band,” she says. “We will be bringing in more to use to decorate our offices.” Lalonde says she’s happy to trade the framing costs for some WMSE air time.

It’s all in the family, more or less, a bit of easy-going barter between the two. Life in Bay View can be very simple sometimes.