She was wrongly fired, she insists to Milwaukee Magazine, whose cover story has many community leaders praising her.

If you’re a fan of former County Parks director Sue Black, you’ll like the January cover story of Milwaukee Magazine, centering around a grand tour of her park accomplishments which Black provides the author, supported by testimonials from others. “Sue is known nationally,” Fran Mainella, former director of the National Park Service, told the magazine “She’s strong, she’s knowledgeable, she’s great to work with as a team. She was very well-respected,” added Jon Kirk Mukri, head of Los Angeles’ parks department.

Locally, some big names heaped more praise: “She exuded a passion that you only wish that people that ran departments or interests would have,” former Wisconsin governor Tommy Thompson declared. “…Always coming up with extraordinarily creative ideas,” added developer Barry Mandel. “The parks will suffer…the community will suffer from the loss,” said a “heartbroken” Michael Cudahy, the retired businessman and philanthropist.

Elsewhere in the media, the treatment of Black has been a little rougher. Milwaukee Journal Sentinel columnist Dan Bice reported that former Milwaukee County Executive Scott Walker almost fired Black and made her sign a resignation letter he kept in his desk so he could let her go at any time.

Democrats were equally tough on Black. Members of the Doyle administration told Bice that Black “alienated her staff and circumvented her bosses – sometimes without telling them – to get what she wanted.” Referring to Black’s style under Abele, former DNR Secretary Scott Hasset told Bice, “From what I understand of the situation, it’s a repeat of patterns at the Department of Natural Resources.” Hasset ended up relieving Black of her job as state parks director.

Bice was following up on columns by Urban Milwaukee editor Bruce Murphy who had earlier reported that Black had been dumped as state parks director and demoted to an administrative job whose title “she couldn’t even recall.” 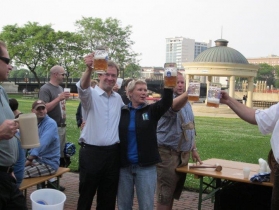 Chris Abele and Sue Black together in happier times.

She was fired by Abele because “she is not a team player” who “whether at the state or the county… would do end runs around the boss to get what she wanted,” Murphy wrote in his second column on the controversy. Murphy noted that for seven straight years, a wary Walker never gave Black a raise, and that after Abele did give her a huge raise, he soon experienced a series of situations where Black undercut him or went to board members or others to countermand his orders.

And a third column by Murphy described how Abele and Black were once “best buddies,” and explained how such friends could have had such a falling out.

That Sue, she certainly makes for good stories.