By Mark Doremus, Milwaukee Neighborhood News Service - Dec 12th, 2012 11:54 am
Get a daily rundown of the top stories on Urban Milwaukee

Some time as early as today the Milwaukee Fire and Police Commission will issue a written decision that will shed light on its flip-flop in the firing of police officer Richard Schoen. The report should be fascinating reading those who have been following the controversy.

Milwaukee Police Chief Edward Flynn fired Schoen after the officer was recorded on a dashboard camera punching a female suspect several times in the back seat of his squad car.  He then dragged her out by the hair and, off-camera, kneed her in the stomach.

Schoen appealed his firing to the Fire and Police Commission. Last week, the commission — in a decision that quickly became infamous —  reversed the chief’s decision and restored Schoen to his job, albeit with a 60-day unpaid suspension, the maximum penalty the commission can impose short of firing or a reduction in rank.

Reaction from citizen groups and some public officials was both swift and vociferously negative, culminating in a raucous public comment session at the commission’s December 6 meeting.

At the start of that meeting the commission announced it would reconsider its decision to overturn the firing of Officer Schoen, a concession that was perhaps missed, or certainly failed to mollify the crowd, which railed against the commission, Flynn, and Mayor Tom Barrett pretty much indiscriminately for 45 minutes before commission members summarily ended the meeting and took their leave.

At yesterday’s (December 11th) meeting, the commission revisited its decision to reinstate Schoen and after further discussion, reversed itself and upheld the police chief’s decision to remove Schoen from the police force. 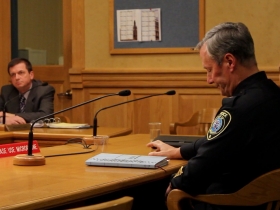 The flip-flop had to be humiliating for the commission, its executive director Mike Tobin and particularly for commissioner Michael O’Hear, a Marquette University law professor who admitted he did not fully understand the criteria he and two other commissioners were supposed to use in making their original decision on Schoen. According to published accounts, O’Hear said that the panel, prior to deciding the Schoen matter, was told it should consider the reasonableness of the chief’s decision to fire the officer, but wasn’t told it should also consider whether the firing was “for the good of the service” – that is, in the best interest of the police force as a whole.

The flip-flop on Schoen has obviously tarnished the commission’s reputation (not to mention O’Hear’s reputation in the legal community) and that’s unfortunate for a variety of reasons.

First, it gives the impression that the commission is susceptible to the whims of public opinion – or, as one commenter put it, “mob rule.” As Tobin has pointed out, the commission’s disciplinary decisions are inevitably controversial, and it has endured criticism before.  If the commission really did err in applying the law to the facts of the Schoen matter, it was right to correct its decision – though getting it right the first time would obviously have been preferable. But the appearance of a political sell-out is there for critics to exploit.

Second, the controversy has prompted some rather precipitous calls to revamp the commission’s charter.  In response to the public outcry to the commission’s original decision on Schoen, the Milwaukee Journal Sentinel did an editorial suggesting it may be necessary to restructure the commission.  The paper failed to mention that there already was a focused and comprehensive review of the commission that was done in 2006 which concluded that, while certain refinements in the commission’s operations were needed, its disciplinary review process actually worked rather well.

Third, as Tobin recently lamented in an interview with Urban Milwaukee, the Schoen controversy overshadowed an important policy initiative by the commission. At the December 6 meeting, before the shouting commenced, the commission approved changes to the police department’s Use of Force Standard Operating Procedure that were proposed by Tobin. The new rules expand the definition of reportable use of force to include focused strikes by an officer, “diffused strikes” and “decentralizations” (takedowns) to the ground.  They also impose an explicit “duty to intervene” on police officers. This means officers are now required to step in if they see a fellow officer using force that “is clearly beyond that which is objectively reasonable under the circumstances.”

In Tobin’s view, these policy changes demonstrate that the commission is a powerful advocate for responsible policing.  “The duty to intervene is rare, nation-wide,” he claims. “That’s huge, but you didn’t hear much about it.” Indeed, the adoption of the new rule was completely overshadowed by the protestors at the meeting and the media coverage of them.

So the regrettable outcome of the Schoen controversy is that a commission which is in many respects a model of citizen control over the police, with robust investigative capacity, broad policy control and independent authority to receive and investigate citizen complaints, has been undermined by a controversy over one infamous — and now reversed — decision. Fair-minded people will want to read the commission’s final decision with regards to Schoen, and to fully understand the commission’s structure and rule-making authority, before rushing to conclusions that it needs to be reformed.

The Fire and Police Commission has released its written report explaining why it reversed its original decision giving Schoen his job back after Chief Flynn fired him for using excessive force against a woman, Jeanine Tracy, who was handcuffed in the back of a squad car.

The commission had been accused of caving in to public pressure (or, more harshly, mob rule) by flip-flopping on its original decision to reinstate Schoen with a 60-day suspension. However, today’s report documents that the reversal was mandated by a serious procedural error in the original decision.

The report states, “we conclude that the good of the service requires that Schoen be permanently discharged.”  The “good of the service” standard was not applied in the original decision, the report says, because the Commission was not instructed on that factor last week when it reversed the chief’s decision.

“Now, with the benefit of time, reflection, and a more complete understanding of the relevant legal standards, Commissioners Lor and O’Hear join Commissioner Cox in agreeing the Chief’s recommendation that Schoen be discharged permanently from the Department,” the report says.

The irony is that the commission revisited its decision because it was subjected to intense public criticism.  The chief himself has no authority to appeal a commission decision. It was the protestors (and some public officials) that, perhaps inadvertently, took up the chief’s cause and forced the commission to reevaluate its original decision.

Today’s report also indicates that officer Schoen’s partner, Nicholas Federer, exchanged angry words with Tracy at the scene of the traffic stop, and that Schoen used some measure of force on Tracy at the scene, after she was already under arrest and was being searched by a female officer. These actions helped aggravate the situation. The panel also concluded that Tracy at no time presented much of a physical threat to officer Schoen, though she was argumentative and abusive, and that Schoen’s excessive use of force was “part and parcel of a loss of temper and due restraint.”

The panel relied primarily on video evidence from the squad car dash camera to determine what happened during and after the traffic stop.  The panel concluded that the dashcam evidence was “clear and compelling as to most of the matters of concern” in the appeal.