For more than a year, the newspaper has been doing story after story alleging problems, all based on data it has requested from the department.

“They (the police department) have the equivalent of two full-time cops handling all the open records requests,” Barrett complains. “There’s no question it’s a distraction. The crush of the requests to the police department has taken crime fighting officers off the street.”

The newspaper’s most recent story reported on issues with the police department’s Tiburon computer system, which was installed in 2005 and was beset with problems. 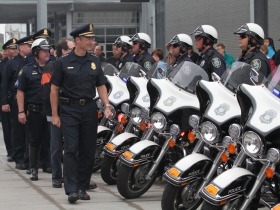 When Ed Flynn became chief in 2008, he enlisted the help of the private sector to help improve the system; more money was spent on it, but there were still problems. From the beginning, when the Journal Sentinel began reporting on crime data errors, Flynn told the paper this was likely due to the Tiburon system, which was problematic not just for Milwaukee but for other cities that have used it. Now, six months after the stories on data errors began, the newspaper is finally emphasizing the role of the Tiburon system.

“I’ve known for a long time they have computer problems,” Barrett says. “But we had spent millions on it. I’m not going to say let’s throw out the system. We put all this money into it, we’re getting hammered by Madison with cuts in aid, we can’t just throw it out.”

At best, that’s a story about the city’s budget priorities. But the headline also suggested there might be pressure from supervisors on police to “underreport findings.”

Barrett wasn’t buying that. “They waited until paragraph 40 — and yes, I counted it — to tell readers that no one accused higher-ups of telling them to do something wrong.”

The paragraph in question, which ran deep into the story, said this: “No one interviewed said he or she received direct orders to downgrade crime. Rather, they described indirect pressure. For example, supervisors at a district station often sought rationales to report a crime as a lesser offense.”

But is that pressure to underreport, or simply due diligence to make sure crime is reported correctly? “The story shows the senior leadership is doing what they should be doing, questioning the data,” says Ald. Nik Kovac. “There’s no smoking gun here.”

“Yeah, the data’s not perfect,” Kovac adds. “We know that. But they’re trying to make it a scandal.”

“Flynn’s got the FBI, the state department of justice, everyone and their brother looking at the data to find any problems,” says Pat Curley, Barrett’s chief of staff. “I don’t know what the paper is looking for.”

Why the Off-the-Record Sources?

When I worked at the Journal Sentinel, stories could not rely on off-the-record sources, and for obvious reasons: you don’t know if the anonymous source has an ax to grind. Yet the story suggesting there might be subtle pressure on police to under-report crimes was largely based on interviews with unnamed “supervisors and clerks.”

How many employees made this accusation? The story doesn’t say. But it offers just one quote describing this alleged pressure. Apparently there wasn’t much usable material from these naysayers.

There will always be malcontents willing to criticize the leadership, Kovac notes. “You may have cops making off-the-record comments for political reasons, because they’re disgruntled with the leadership of Barrett and Flynn.

Many police are angry with Barrett because he defeated the police union’s attempt to get state legislators to override the city’s residency requirement for police, Kovac notes. As for Flynn, Kovac says, “some police are mad because he’s actually turned the department into a meritocracy for the first time in my lifetime. You have a struggle within the department over this. It’s a large, 2,000-person bureaucracy and some are going to fight the change.”

There’s no way that reporters Ben Poston and John Diedrich would have done a story based on off-the-record sources without the approval of top editors. It would at least need a signoff from Managing Editor George Stanley. Nor would the newspaper run such an extraordinary number of stories blasting a major Milwaukee institution unless the decision came from the top.

In story after story you can sense the JS is out to get Flynn with its news coverage. Thus the newspaper gave considerable prominence to a story reporting that “a coalition of residents…presented the U.S. attorney’s office with hundreds of pages of documentation they say proves Milwaukee police have violated citizens’ rights… generating misconduct complaints that have cost taxpayers more than $14 million over the past 10 years.”

Since the coalition was calling for the resignation of Flynn, shouldn’t the story make some attempt to distinguish how many of these misconduct allegations occurred before Flynn became chief? The complaint mentions two alleged rogue cop groups, the “Punishers” and “Night Train,” which both go back to the days of Chief Nannette Hegerty.  As for complaints costing taxpayers, there were numerous million dollar payouts by the city under Hegerty and her predecessor Arthur Jones. I don’t recall any under Flynn. Maybe this is worth clarifying to readers.

At times, you sense some division at the paper as to how Flynn is being covered. It’s original story on errors in crime data — back in May — suggested Flynn was deliberately manipulating the results. But six months later the Journal Sentinel’s editorial board decided that “there is no evidence now that anyone is cooking the books to make the department look better.” The editorial quoted approvingly Barrett’s comment that “he is not concerned there is any intent to manipulate crime data.”

So far there’s been no editorial taking that back, despite the story detailing all that subtle pressure by police supervisors — so subtle it can only be discussed off the record — to cook the books.

At this point, Kovac says, it probably doesn’t matter. “I don’t think anyone credible is even reading these stories on crime data anymore. I hope the newspaper recognizes how much credibility they lost with their coverage of this.”

-It should be noted that Ald. Kovac distinguishes the stories on crime data from those documenting problems with how police have handled suspects in custody. “The newspaper watchdog can play an important role. We all deserve scrutiny.” But those valid stories, he adds, can be lost if the newspaper begins to lose credibility. “It’s really heartbreaking in a way.”

-And I can’t resist quoting this thoughtful comment from a reader, attorney Claude Krawczyk, regarding the decline of shared revenue to Milwaukee: “I work at a mid-size law firm in downtown Milwaukee. Most of our highest paid employees/attorneys live in Mequon, Brookfield and other suburban communities… They are all good people who should have the choice to live in the best place for themselves and their families. However, why shouldn’t someone who works in the City but lives in Elm Grove contribute to the cost of living… in the City? Residents of neighboring counties not only benefit from working in a large metro area, but they also visit and enjoy Summerfest, the zoo, the art museum, the Marcus Center, etc. Isn’t this what shared revenue was designed to address? Wouldn’t a worker who lives in Kenosha, but works in Chicago pay Illinois income taxes? Why shouldn’t those who live outside the City and County, but work here contribute likewise.”