A Neighborhood On the Rise

By Edgar Mendez, Milwaukee Neighborhood News Service - Nov 28th, 2012 08:30 am
Get a daily rundown of the top stories on Urban Milwaukee 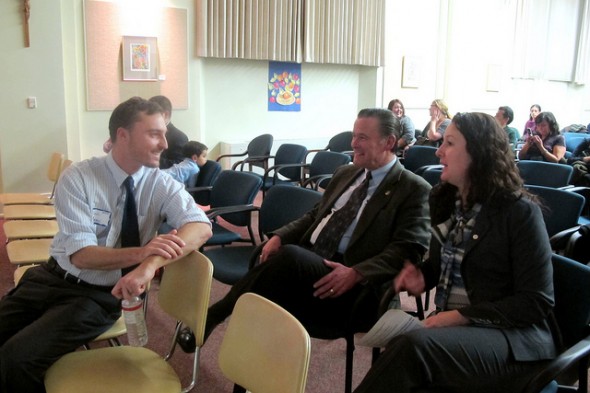 The pocket park on the corner of South 29th Street and West Burnham was a neglected and vacant lot in 2011. It now draws neighbors who congregate among new benches and raised garden beds. During the summer Artists Working in Education, a non-profit that sponsors artists to work with children, brought its satellite studio to the park, helping children decorate the space.

The park is an example of how one project can accomplish multiple objectives set forth in the community’s Quality of Life Plan, unveiled a year ago by Layton Boulevard West Neighbors (LBWN). The  non-profit serves the Silver City, Layton Park and Burnham Park neighborhoods.

The project meets four of the plan’s seven objectives: social engagement, healthy living, community safety and neighborhood appearance, according to Dan Adams, neighborhood plan coordinator for LBWN. Next year, another pocket park in a lot on South 32nd Street and West Madison will be developed. The other objectives are economic development, community identity, and youth education and leadership.

Community residents and officials recently came together to celebrate LBWN’s 17th anniversary and hear about progress toward implementing the Quality of Life Plan.

Alderman Bob Donovan, who represents the neighborhood, called it one of the best in Milwaukee, citing the level of cooperation among elected officials, LBWN and the residents. 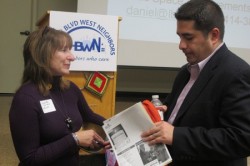 “We’re all on the same page and that bodes well for the future of this community,” Donovan said.

Another positive is the increased business and private investment in the community. Over the past year LBWN has purchased eight vacant foreclosed homes that were rehabbed and sold to owner occupants. Two more homes are under construction, bringing the organization’s property investment to more than $1.2 million. Two commercial storefronts on South 35th Street and West National Avenue also have been purchased and will be rehabbed for new businesses looking to move into the area, according to Will Sebern, LBWN community outreach manager.

A mobile kiosk is scheduled to be built next year. The kiosk would direct people to the many amenities the neighborhood offers, including the new Urban Ecology Center and an ethnic food district along West National Avenue.

Private homeowners, spurred by LBWN, also have done their share of investing. Fifty-five private homes in the neighborhood have been improved in 2012, according to Sebern. Many of those homeowners participated in LBWN’s “Most Improved Home Contest,“ while also taking advantage of city programs such as Milwaukee Energy Efficiency (Me2) to upgrade their properties.

Martha Castaneda, who was a contest winner, said she painted her home and redid her porch during the contest.

“It was my way of improving the way the neighborhood looks,” Castaneda said.

The idea prompted identical contests in the Havenwoods and Thurston Woods neighborhoods on the north side of Milwaukee. All three neighborhoods are part of the Greater Milwaukee Foundation’s Healthy Neighborhoods Initiative.

Steve Antosiewicz, who has lived in the area since the ’70s, said he’s seen his share of ups and downs during that time, but currently the neighborhood is on the rise.

“There’s a ‘coming together’ spirit here; before people would stick to themselves in quiet desperation,” Antosiewicz said.

He thinks the reason for the change is that people have taken increased ownership of the neighborhood during the past few years.

Planning for the Quality of Life Plan began in October 2010, when the Zilber Family Foundation selected Silver City, Layton Park and Burnham Park to be revitalized as part of the Zilber Neighborhood Initiative (ZNI). The first two ZNI neighborhoods were Lindsay Heights and Clarke Square.

LBWN received a grant of $875,000 over four years from Zilber to create and implement a comprehensive community development plan with neighbors and other local partners.

Susan Lloyd, executive director of the Zilber Family Foundation, was on hand to celebrate LBWN’s accomplishments during the past year. LBWN is one of the best community organizations in the country, according to Lloyd.

“We’re lucky to have them; they’re extremely effective in getting the community involved in projects that improve their quality of life and neighborhood.”

One thought on “A Neighborhood On the Rise”