How did a West Point man became a playwright and director of the South Milwaukee Performing Arts Center?

Chad Piechocki’s father served in the Marine Corps and his uncle, also a Marine, served two tours in Vietnam.  His maternal grandpa received a purple heart after being shot in the knee during World War II. “The bullet is still there,” Chad says.

He decided to attend West Point after high school, not because of his family history, but more because the education was free to anyone who served for five years in the army after graduation. He’d watched his two older brothers struggle to bankroll their college education. His parents weren’t keen on his decision, and his dad tried talking him out of it.

But Piechocki stuck with his decision. It was 1997 and he was graduating from Pulaski High School in tiny Pulaski, WI, a town of some 2,000 primarily Polish souls who annually host a Polka Days celebration, and heading for the famed army college located just 50 miles north of New York City. He was off to live his childhood dream of being “the hero,” but what exactly that might mean wasn’t clear to him.

The newly enrolled freshman didn’t march to the beat of the usual West Point cadet. He opted for courses in art, philosophy and literature, which eventually led to a degree in liberal arts. It was a doubly strange choice in that Chad hadn’t aced high school writing, or the strict rules of the English language. But he saw college courses in English as challenges to be conquered and hoped to be a genuine writer someday, a poet perchance, for after all, he’d written poetry in high school.

After graduating from West Point, Piechocki served as an army officer for 13 months before deciding to quit. By then, he was certain he wanted to be a writer. But he made his decision shortly after the terrorist attacks of 9/11. “It was an odd time to be backing away from the military, living in New York City,” he recalls. “It was really tough. I lost friends. People would tell me I was crazy.”

It also meant student debt. His 14 months service shaved off just 23 percent of his college tuition costs; he would have to repay the rest. Working restaurant jobs to pay bills, Piechocki spent the next year or so writing poetry and other creative pieces in Washington DC.  He began to think seriously about the philosophy of Descartes — the idea of questioning all he’d learned and reexamining and rebuilding his belief structure and viewpoints. “Then I read a bit of existentialism, mostly Sartre,” he says, and naturally that made him determined to work on creating his own life.

In March 2003, Piechocki decided to move closer to home.  He packed his car and headed for Milwaukee. “I had like 100 bucks and my credit cards were maxed out,” he laughs. “It was a classic coming of age story.”

Having visited friends at UW-Milwaukee and Marquette, Piechocki knew Milwaukee had a strong art scene. He moved into an apartment on Brady Street and remembers vividly the liveliness of the neighborhood. He landed a job with the Marcus Center for Performing Arts as a part-time house manager and took another job managing an apartment complex. And he wrote. Using the model of structure and discipline from West Point, Piechocki pushed himself to write everyday even while working long hours at his jobs. 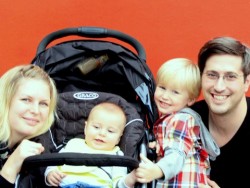 Chad met his future wife, Rebecca Rossi (who studied philosophy at UWM) at Caroline’s Jazz Club. While dating the two lived together in Bay View, but in 2007 after the couple married, they bought their current home in Washington Heights. There, they are raising two sons, Eli and Asher, in a craftsman-style home near 50th & Vliet. After meeting Rebecca, Piechocki says, things seemed to fall into place.

Piechocki got a new job at the United Performing Arts Fund where he coordinated the annual Ride for the Arts. He spent two and a half years with UPAF until June 2010, when he won his current position as director of the South Milwaukee Performing Arts Center. The center handles 500 events a year, including “100 performance type events,” Chad says, including everything from high school performances to professional touring companies he books. His favorites so far: Flamenco Vivo, a flamenco dance troupe from New York, and jazz pianist Robert Glasper, who performed in September in a quartet, handling some wildly experimental music.

Meanwhile, there was the dream of being the hero, or at least the writer. In 2008, the Boulevard Ensemble produced a play by Chad M. Rossi (Piechocki decided on a pen name borrowing his wife’s last name). The play is a comedy about two young men living on their own and enjoying the freedom, while dealing with sex, alcohol, relationships and questions about values.  The play and production got mixed reviews, but Piechocki praises Boulevard’s longtime director, Mark Bucher, for giving him a start in the Milwaukee theater world.

In 2012, Chad collaborated with a choreographer and two musicians on a short poetic piece, “Love in a Time of War,” for Danceworks Art to Art show staged in August. It tells of a poet who “has wrestled with the concept of Fate and the idea that War is inevitable for the human race,” and of a new class of cadets who graduated, as Piechocki did, in 2001. They were honored with the traditional Acceptance Day Parade, but it was interrupted by a wild storm that swept through the Hudson Valley without warning. The commanding general ordered the corps to return to the barracks, and the parade was cancelled on an ominous note. Two years later, U.S. troops, including many Lieutenants fresh from this Class of 2001, invaded Iraq. Chad’s powerful and poignant poem is divided into five stanzas, beginning with “Song,” and ending with “Prayer.”

Piechocki recalls a seal at the Milwaukee County War Memorial building which reads: “To Honor the Dead by Serving the Living.” It bespeaks a military life he left behind. He has no regrets about that choice. But in a way he still lives up to that motto, serving the living, though in his own way. As Chad puts it, “I’d rather spend my life creating art than participating in war.”

Additional reporting for this story by Judith Ann Moriarty.