Milwaukee Neighborhood News Service could be the future of journalism.

Is the Milwaukee Neighborhood News Service a community outreach project? Or an academic project?

“No, and no,” says Editor Sharon McGowan. “It is a professional journalism project.”

But it does have both academic and community outreach roles. Milwaukeenns.org traces its origins to the Joseph and Vera Zilber Family Foundation [2010 assets: $34 million] and its 2008 $50 million, ten-year commitment to improve targeted Milwaukee neighborhoods. The idea is that news coverage of these communities — telling stories the mainstream media might ignore — will also help strengthen these communities. The neighborhood news service is a project of United Neighborhood Centers of Milwaukee, which received $408,000 in funding from the Ziliber foundation in 2010, the most recent year for which information is available.

As for the academic connection, the non-profit, advertising-free news service is staffed by Marquette University Diederich College of Journalism graduate students, and is housed on-campus, where the Jesuit institution also provides equipment, newsroom, office space and other support.

McGowan has a long history as a journalist in Chicago and still commutes to Milwaukee to run the neighborhood news service. She served as an investigative reporter and managing editor of The Chicago Reporter, a monthly publication which often covered race relations and poverty issues. She served as managing editor and then manager for two different CBS radio stations in Chicago. And she has directed the graduate Introduction to Journalism program at the well-regarded Medill School of Journalism, Northwestern University and was an adjunct lecturer for more than 20 years

The news service she now runs covers 15 different neighborhoods, including five on the South Side, four on the North Side, two on the northwest side and four on the West Side. The coverage is often hyper-local, with stories on the the Martin Luther King Dr. commercial corridor, an urban agricultural program at Vincent High School, a home beautification contest in the Layton Boulevard West neighborhood, and the impact of small free libraries in the Lindsay Heights neighborhood. 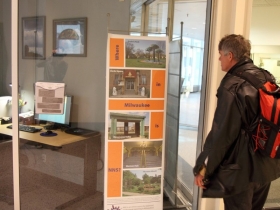 The publication covers “stories that are important to the people who live, work and serve in city neighborhoods, on topics such as education, public safety, economic development, health and wellness, environment, recreation, employment, youth development and housing,” according to a statement on its website.

“We work deadlines like a news organization,” McGowan says. We try to post a story every weekday. Our staff reporters and interns are always working on a special report. They are working on stories or events or issues that directly affect our communities.”

Besides its Zilber funding, additional dollars come from a Knight Foundation challenge grant, met locally by Zilber and the Greater Milwaukee Foundation, and from the Argosy Foundation, funded by the family of Milwaukee County Executive Chris Abele.

This level of support for her non-profit should be a relief for McGowan, since it frees her from the care and feeding of a sales force along with the real and perceived challenges of dealing with advertisers in the for-profit model of journalism.

Not quite, McGowan says: “Both systems have advantages and disadvantages. Publications with advertising have to keep getting advertisers. We depend on foundation funding, which has been generous. But we constantly have to work at going after grants.”

The NNS stories are available for reuse by other news organization free of charge, provided credit is given to Milwaukeenns. [See “Juvenile Reform School Comes Home” by Edgar Mendez in Urban Milwaukee.]

“Our role is to cover stories that tend to go uncovered. We find an angle relevant to our users or we don’t do it.”

This new news model could be a sign of things to come. “At a time when the core business model for commercial journalism is suffering a slow collapse, alternative models like nonprofit community news sites are essential,” argues Victor Pickard, Assistant Professor at the Annenberg School of Communication at the University of Pennsylvania. “The future of journalism depends on such experiments succeeding.”

3 thoughts on “Plenty of Horne: New Journalists in Town”