The impact of a semi-successful early 80's plan for a large stretch of downtown.

What was the vision for Downtown in the 1980’s? Ask ten people and you’re likely to get ten different answers. Many would cite such major buildings and complexes as the Grand Avenue Mall, Bradley Center arena, Hyatt hotel, and Milwaukee Center and 100 East office towers. An impressive list of projects for sure, including the second and fourth tallest buildings in the city, but unfortunately also including a mall in foreclosure and a basketball stadium on the demolition block. Meanwhile, what visions for the city weren’t realized? 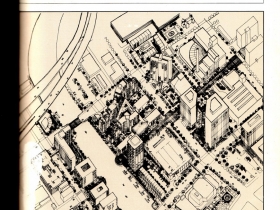 By chance, I stumbled across a 1981 plan on the shelves at the downtown Milwaukee Public Library. Entitled the “Milwaukee Brewery District Action Plan,” the plan was commissioned by the Department of City Development because of  what it called “development pressure” in the area. The Brewery District was defined as an 80-acre area from Old World Third St. on the west to Milwaukee St. on the east, and State St. on the south to Knapp St. and the Park East Freeway spur on the north. You’ll find scanned images of the plan at the end of the article.

Authored by Crane Associates, Inc. of Boston and the Real Estate Research Corporation of Chicago, the plan featured five themes: to “recapture the riverfront,” develop “an urban village,” create an “office sub-center,” foster a “tourist/cultural academic district,” and designate a “small business district.”

The planners showed foresight in pushing for historic preservation and taking advantage of the proximity to the river.  The plan was authored before the creation of the Milwaukee RiverWalk and the preservation of many of the city’s brewery buildings. Ironically, the plan was called The Brewery District, despite the fact that the historic cores of both the Schlitz and Pabst breweries were located outside of it, leaving only a few buildings from the former Blatz brewery inside the district.

In addition to the themes, the plan offered a number of early action projects.

In hindsight, it’s impressive how much of this plan was actually implemented. But there’s a chicken and egg issue here: Did the plan cause these things to happen or were gears already turning on many projects? Hard to say, and I wasn’t able to track down anyone that definitively knows. Either way, the neighborhood did see a lot of redevelopment following the release of the plan.

The Milwaukee Florist Exchange never got off the ground, leaving the one-story warehouse operation of Rojahn & Malaney Company still along the river. This is still unfortunately part of a black-hole stretch on the river today. The proposed location for the Milwaukee Florist Exchange on the corner of Knapp St. and Broadway is now home to the underwhelming, under-construction MSOE parking garage.

As the report hints, the Jefferson School Site Housing did happen, turning the corner of Milwaukee and State into the Courtyard Square apartments (now condominiums).

The State-Water Street Office Building did happen, but only after a false start in 1988. The building today is known as 1000 North Water Street, with anchor tenant Reinhart Boerner Van Deuren s.c., a 24-story complex consisting of a 16-story building built atop a 8-story, 1,600 car parking garage.

The Broadway-Wells Parking Structure was built starting in 1983, and is today known as the Plaza East Pavilion. The white parking ramp attempts to have a retail presence with a Park Bank branch on the corner of Wells and Broadway, but ultimately the garage deadens anything on the the street it touches. It’s easily the most disappointing part of the plan that was executed, and is ironically outside of the borders of the plan.

The Waterfront East housing project did partially occur, with Ogden Development Group building 24 luxury townhouses on Edison Street just south of The Harp tavern (unfortunately without a public riverwalk on the riverside). This was also short of the 400 expected units. In addition, a number of the buildings on the block between Edison St. and Water St., and Knapp St. and Highland Ave. were preserved (today largely as bars and restaurants) instead of demolished for new buildings. And Edison St. was also not vacated between Highland St. and Knapp St., a move that would have likely made the area less walkable.

Suggested buildings for a number of surface parking lots unfortunately also have failed to materialize to-date. MSOE still maintains a large surface parking lot where Highland Ave. should go through between Broadway and Milwaukee St. The plan proposed two buildings and the creation of a pedestrian Highland Ave. for the site. In addition, a building on the southeast corner of Old World Third St. and Juneau Ave. has never materialized; today the site is a parking lot for the mixed-use building immediately to the south. 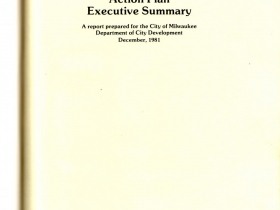 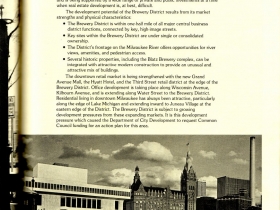 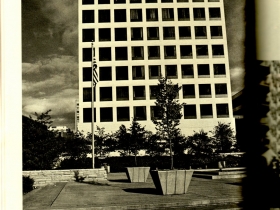 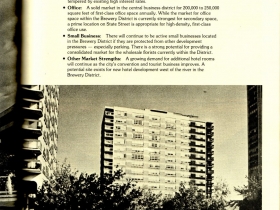 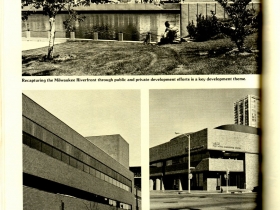 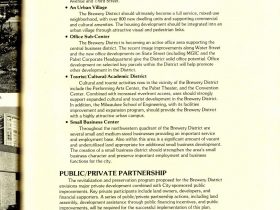 3 thoughts on “The Milwaukee Brewery District”