The Milwaukee native has become a top-selling artist and successful businessman. 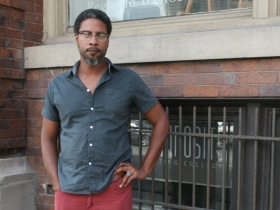 For Reggie Baylor, it all started in kindergarten at Milwaukee’s Siloah Lutheran School. It was there that his teacher, Mrs. Arnt, encouraged his passion for art. “She recognized how intense I was,” Baylor recalls. “In fact, she called my mother about a finger painting I did. My mother still has that painting.”

Today, Baylor is one of Milwaukee’s most successful artists. He was the first artist-in-residence at the Pfister Hotel. He has his own studio nestled into the Historic Third Ward, a second business, Plaid Tuba Holdings LLC, a brand designed to work with upcoming creative professionals, and an assistant, Heidi Witz, who helps him with both endeavors.

Baylor grew up in the city, at 41st and Hampton, and attended Lutheran parochial schools, where his artwork was encouraged. He also credits his parents for supporting his passion and forcing him to work at a young age (though he didn’t appreciate this at the time). “I am a by-product of my parents, who really forced a work ethic into my head,” he says. But his journey to success took some unexpected twists and turns.

When Baylor was in sixth grade, his family moved to Mequon, where he attended public schools and graduated from Homestead High School. At UW-Oshkosh, he majored in sculpture, but also took a lot of philosophy.

“I found connections between philosophy thinking and aesthetic thinking,” he says. “There are infinite ways to express myself and my ideas. Thinking of it numerically, all I have to do is pick one number and focus on it.” Baylor says he still has an obsession with philosophy, linear theory numbers, variables, and equations.

Baylor left college in 1988 just three credits short of graduating, hung around Oshkosh for a few years, then gravitated to California, where he met his wife Jill and worked at the Laguna Beach Art Museum and Newport Art Museum, helping to install exhibits. There, as Milwaukee Journal Sentinel critic Mary Louis Schmacher has written, “he opened crates and handled the works of Pablo Picasso, Ellsworth Kelly, Kiki Smith and — his favorite — the Swiss sculptor Alberto Giacometti, among countless others. Today, in Baylor’s Third Ward studio, there is an old cardboard box filled with beloved photographs, clippings and reproductions of artworks… Many of them date to the five years he spent studying art history in this hands-on way.”

The experience was critical to Baylor’s own artistry, and he moved from sculpture to painting in acrylics. In 1995, he connected to an art dealer, Suzanne Zada of Beverly Hills, CA , who began to represent him and still does today.

That same year Reginald, his wife and two sons moved to Chicago, Ill., where he worked as an owner operator for Mason Dixon Trucking. Meanwhile, he was working on his paintings. Upon moving with his family back to Milwaukee in 1998, Baylor began exhibiting widely in galleries and museums, and was able to become a full-time artist.

In 2009, Baylor served as artist-in-residence at the Pfister Hotel, where he had the opportunity to enjoy the impressive period architecture and extensive Victorian art collection of the Pfister.  Elements from the painting A Captive, he told the Shepherd Express, led him to incorporate putti, or winged angels, and Corinthian columns into new compositions. The residency also gave Baylor a chance to learn more about the business side of being an artist such as marketing and planning.

On a recent tour of Baylor’s studio, the buzz of creativity was immediate. Designed to be an open studio, Baylor and his staff welcome the community inside to get a flavor of his art. His pieces are eclectic, but often vibrantly-colored, with a pop art flavor. Some works include pop culture figures — the Kool-Aid Man, Pac-Man, even Mickey Mouse. Baylor has two sons,  now 16 and 21, and says that, “Living with Disney, Nickelodeon, and all these other youthful media, I sort of pulled that out and put it into my work. Things like that remind me of being young and innocent. There’s also an element of nostalgia. “ Not all of his works are so light-hearted, though. As Baylor notes, some of the pop culture figures represent darker themes.

His obsession with philosophy and equations can be seen in pieces like “Multiple Choice,” that graphically maps out equations, and “Instructions for a Cell Phone App” that is literally instructions for an app that enthusiasts can purchase. When asked about these pieces Baylor explains, “I’ve established a certain amount of rules, and those rules allow me to maintain a consistency in my aesthetics.” But there’s also a sense of exploration at work.  “Those pieces also were sort of a byproduct of finding ways to do things other than painting on canvas,” Baylor says. “I could use other ways and other technology to create work.”

Though people often comment on the colorfulness of his pieces, Baylor says he doesn’t feel that colors are the strongest part of his work. Instead, he considers his unique approach and process the vital aspect of his art. “It’s the lines and how I do the colors, how I approach a painting. I look at it numerically.”

Baylor also considers the demographics of his buyers so he can produce art in forms that are accessible to everyone. He sells large-scale pieces for the avid art enthusiast but also markets to the lower-income buyer with smaller items like postcards and posters. In the future he hopes to broaden his stock to include temporary tattoos, decks of cards and even jewelry.

Through Plaid Tuba Holdings, Baylor also helps mentor and develop young artists. When he thinks back to his own journey, he understands the importance of such encouragement. Still, the process of becoming an artist also depends on that person’s daring and tenacity. When asked to sum up his success story, Baylor laughs and says, “I got thrown in the water and had to learn to swim.” 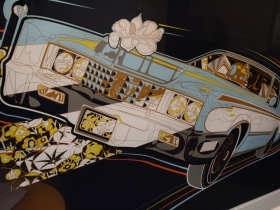 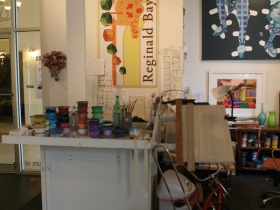 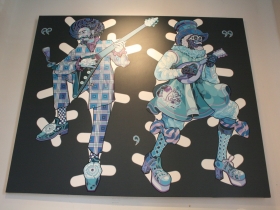 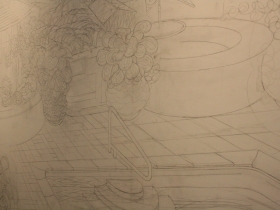 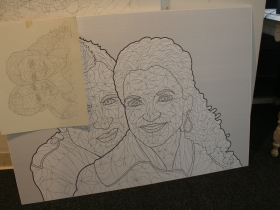 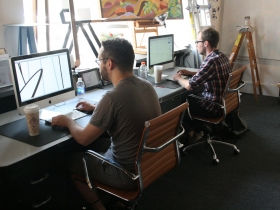