Why Milwaukee isn't likely to ever to host the Olympics, and why it would have been nice if Chicago did. 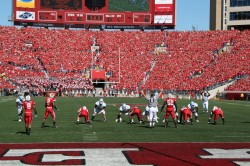 Could Camp Randall be red, white, and blue? Probably not.

The Wall Street Journal sent Milwaukee into a frenzy this week by suggesting the Olympics could be held here. Building off the unusually high television ratings (we’ve since fallen to third place), they suggested that events could be held at Miller Park, Lambeau Field and Camp Randall Stadium. Unfortunately, two of the three venues aren’t anywhere close to Milwaukee. That’s of course minor compared to the laundry list of other reasons Milwaukee wouldn’t be picked to host the summer games.

Kudos to the editor at the Wall Street Journal that figured out that the Milwaukee market’s heavy Olympic obsession would turn an easy-to-write article into a viral story. Step one, pick small media market obsessed with the Olympics. Step two, write article that suggests Olympics could be hosted there and name drop existing venues. Step three, watch it go viral. Details? Don’t sweat ’em.

Interestingly enough, only my Milwaukee friends were sharing the article on Facebook. My out-state friends didn’t seem as interested in Milwaukee hosting the Olympics. While this is an informal survey as it gets, it’s yet another example of the disconnect between Milwaukee and Wisconsin.

Why couldn’t Milwaukee host the Olympics?

Hotels for starters are required en masse. The 2016 host, Rio de Janiero, is budgeting to have a minimum of 40,000 rooms. Milwaukee has around 16,0o0 rooms according to a VISIT Milwaukee fact sheet. Before you suggest that yes, the entire state could cobble together 40,000 rooms, it’s important to remember that the state is about as disconnected as they come. It might be a more plausible pipe dream to host the games if every single regional transit initiative didn’t go down in flames by 2010. Hiawatha extension to Madison? We gave back the money. Commuter rail to link Milwaukee, Racine, and Kenosha with northern Illinois? Republicans killed the project. Dedicated funding for regional transit? Democrats couldn’t agree on how to pass it.

When Chicago bid for the 2016 Olympics one of the biggest things dragging down their attempt was their transit plans. They of course have subway lines, elevated rail, commuter rail, express busing, and a large suburban bus system. Milwaukee has? Well, none of that.

Milwaukee also lacks a large enough venue to hold the biggest events. Plus the one of the major venues we do have, the BMO Harris Bradley Center, is outdated by NBA-standards.

What if Chicago had won the 2016 Olympics?

Would Chicago’s receiving the Olympics have changed the course of Milwaukee’s history? I tend to think so. While Chicago was bidding for the games, the KRM commuter rail system that would have linked Milwaukee, Racine, and Kenosha with the Metra commuter rail system in Chicagoland was still on the table. I can’t imagine it would have been cancelled if the games were coming.

What about Governor Scott Walker and the Hiawatha extension to Madison? I don’t think Chicago winning the games would have changed the outcome of the 2010 gubernatorial election, given that Republicans won big-time all across the country. I do, however, think it would have changed Walker’s campaign strategy. The Hiawatha extension would likely have been more aptly sold as connecting more of Wisconsin with Chicago via an existing route, as opposed to new high-speed service between Milwaukee and Madison. Governor Walker might have even been sipping champagne on the Hiawatha on his way to the opening ceremonies.

Milwaukee and Wisconsin could have won big if Chicago got the games. All the upside, with very little of the risk.

Pittsburgh is a city going through tough financial times (story one, story two). Despite their ever improving post-steel image, the city has money problems, especially with their pensions. One step they’ve taken to rectify that is to announce the availability of naming rights on just about everything the city owns. It’s not surprising they’re offering up swimming pools and recreation centers for naming rights, but they’re also going to allow advertising on employee uniforms and city vehicles.

County Executive Chris Abele‘s administration has shown a desire to leave no stone unturned when it comes to searching for ways to improve Milwaukee County’s fiscal position. Could this be something Milwaukee County engages in?

The Milwaukee County Transit System already sells ads on its vehicles, both inside and out. The airport, a county institution, is also littered with advertising. But what about ads on county snow plows for Hupy and Abraham? Could county parks workers wear BMO Harris logos on their uniforms? If these advertising solutions can get the county parks better maintained, I’m likely game.

That said, Rahm Emanuel and Chicago have provided a good example of advertising can tarnish iconic landmarks. The City of Chicago placed advertising on a well-known downtown bridge and it was widely panned. It likely makes sense to advertise on things people don’t have emotional attachments to, employee uniforms, vehicles, and warehouse like buildings. It doesn’t make sense to tarnish highly visible landmarks for a quick buck.

If anyone at the City of Milwaukee is listening, I’ll take Pepsi logos on garbage trucks for longer library hours. 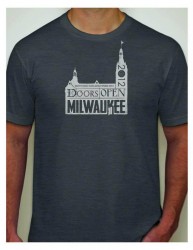 Historic Milwaukee, Inc. has announced the winner of their t-shirt design contest for Doors Open Milwaukee.  Brian Stefanik’s design, which incorporates a Milwaukee City Hall silhouette, has been selected. The t-shirts will be available for sale online shortly. Doors Open Milwaukee will be held on September 22nd and 23rd this year. The event features access to a number of buildings around Milwaukee’s urban core.

6 thoughts on “Eyes on Milwaukee: The Milwaukee Olympics”