This is the End, Beautiful Friend

Some thoughts on the bitter end of Sydney Hih. 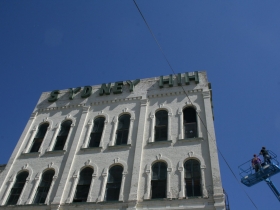 Sydney Hih as the letters were coming down.

Speaking about the song, “This is the End,” Jim Morrison once said, “Everytime I hear that song, it means something else to me.  It started out as a simple good-bye song… Probably just to a girl, but I see how it could be a goodbye to a kind of childhood.”

Milwaukee will soon close the door on a little bit of its childhood.  On Tuesday the Milwaukee Common Council voted to uphold the appeal of the interim designation of the Sydney Hih, effectively sealing its fate to the wrecking ball.  The Sydney Hih dates back 135 years, but 2012 is the end.

The complex has a rich history to go with those 135 years.  The corner building, The Senn Building, was named after Dr. Nicholas Senn who obtained worldwide recognition for his experimental abdominal surgery, and research into asepsis and antiseptic 4 procedures.  Later in life it became the West Side Savings Bank.

But it is the late 20th century life that most remember and cherish.  The Sydney Hih was a touchstone of Milwaukee’s counter culture.  It was the home of small merchants, emerging artists, upcoming musicians, and creative restaurateurs. In the basement was Milwaukee’s version of New York City’s CBGB’s, The Unicorn, where bands like the Smashing Pumpkins, Nirvana, Pearl Jam, and even the Gufs (they actually played their first show as a band at the Unicorn), played on their way up.  In fact the Smashing Pumpkins is re-releasing Pisces Iscariot which includes a live performance recorded at the Unicorn.  This performance actually:

The debate to save the Sydney Hih wasn’t about whether a new building was better than an old building.  It was about valuing our history both distant and recent, and incorporating our past into a vision for the future.  At the council meeting Ald. Nik Kovac made one last effort to gain support for this vision. Kovac implored the council to “allow our historic preservation process and urban planning process to keep our options open.”  But his request fell on deaf ears.  And Milwaukee will continue down the failed path of urban renewal, repeating the mistakes of our teenage years.

In the end, the Common Council voted 13 to 2 to allow the appeal of the interim historic designation to stand, and the Sydney Hih to come down. End of story.

The end of our elaborate plans. The end of everything that stands. The end.

6 thoughts on “This is the End, Beautiful Friend”