How successful is the urban plaza on the edge of the Historic Third Ward?

Last week we took a look at the Historic Third Wardʼs premier public space, Catalano Square. This week we return to the Historic Third Ward to take a look at one of the Cityʼs newest public spaces – the Erie Street Plaza – which offers a more contemporary and stylized take on the public realm than we may be used to seeing in Milwaukee. Located in the southeastern reaches of the neighborhood and featuring a quirky collection of amenities and design elements, the Historic Third Wardʼs Erie Street Plaza stands in stark contrast to the acres of parking lot to its north, and the industrial Inner Harbor to the south. No doubt, many readers may be unfamiliar with its very existence, isolated and compact as it is (only 0.25 acres).

Arising from a international design competition held by the City in 2007, the parkʼs design is the work of Boston-based Stoss Landscape Urbanism. According to Stoss, the driving concept behind the space revolved around the need to maximize “programmatic, environmental, and ecologic variety…while recalling the siteʼs industrial past.” As Dave Reid noted in an earlier article here in Urban Milwaukee, the final buildout of the space is not entirely in line with those initial designs. Perhaps most spectacularly, those designs called for bamboo plantings sustained in buried steam pits that would allow the bamboo to continue to grow – and live – throughout Milwaukeeʼs less temperate months, in addition to creating a nifty microclimate that shows up in early renderings as a haze of steam, or “radiant grove.” It was a whimsical design that eventually fell prey to a combination of NIMBY opposition and fiscal reality.

Voicing her disappointment in the space in an article from April of this year, the Journal Sentinelʼs Mary Louise Schumacher lamented the state of the parkʼs plexiglass benches (she couldnʼt imagine wanting to sit on one) and the various cost-engineered aspects of the design, not least of which the decision to use native quaking aspen trees in lieu of the bamboo groves called for by the award-winning design. According to Schumacher, this resulted in the loss of the “element of tall verticality to the overall composition.” Itʼs possible that my diminutive stature makes me less sensitive to deficiencies in a spaceʼs “tall verticality,” but I will admit that I too was disappointed to learn that the bamboo trees had been axed. Ultimately for Schumacher the space fails in what it set out to achieve – something “transformative and environmentally conscious” – and languishes instead as “unremarkable and uninviting.”

Although I agree that the space can at times feel uninviting, the root cause of my unease arises not from the benches or the shorter-than-intended verticality of the space, but rather the presence of the private restaurant immediately next door with little in the way of physical or visual demarcation between the two. This has occasionally left me feeling like an eavesdropper or intruder on nearby patrons, or an unwitting supervisor of wayward munchkins whose dining parents have co-opted the space as a sort of urban daycare. The colorful yellow benches, which glow at night, perhaps draw them like bugs to a flame.

Yet whatever the failings in the siteʼs technical execution, the story of any space is also one of context and it is here that the park excels. Nestled at the confluence of the Milwaukee Harbor and the Milwaukee and Kinnickinnic Rivers, it resists both the horizon-engulfing expansiveness of the lakefront and the tunneled intimacy of the RiverWalk. What it does phenomenally well is carve out a space that seems both secluded and improbably awash in sunlight (I recommend visiting near dusk), perched out at the elbow of the river as it is. It is a unique kind of edge experience, one simultaneously industrial, remote, and urban, and which leaves me feeling like Iʼve somehow wandered out to the edge of the world, while also deeply into the urban fabric all at once. This, combined with the novelty of the spaceʼs programming, however unfaithfully executed it may be, is precisely what draws me back to it. From here I can contemplate the hulking underbelly of the Hoan Bridge, the industrial structures of the Inner Harbor across the way, or the slow plying of a passing sailboat or barge.

I have even braved to sit on one of its variform benches, which I do not find terribly objectionable, despite one or two of them bearing a remarkable resemblance to a casket. On warm days, however, I prefer sitting on the pavers or wood planks that cover the ground with a bench at my back as a backrest (the benches themselves have none).

It is, in short, a good place to devour a book and the city all at once. And at night the glowing yellow benches contrast spectacularly with the storied infrastructure of the cityʼs past and present.

But what I most love about this space – or any space really – is that you donʼt have to take my word for it. That you could at any moment step away from your computer and wander into the brute physicality of the world outside your window, like a character from an Akira Kurosawa film into a living painting. I hope you will. 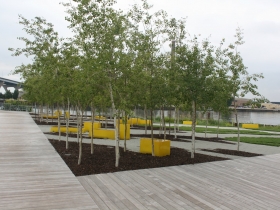 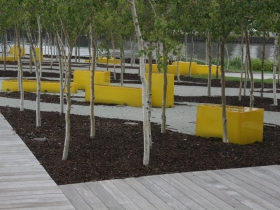 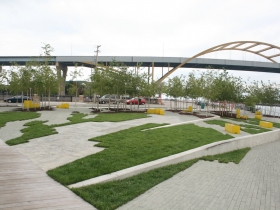 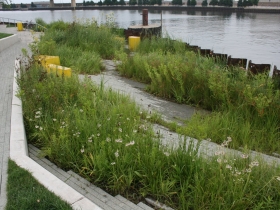 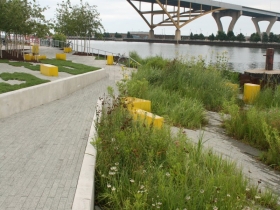 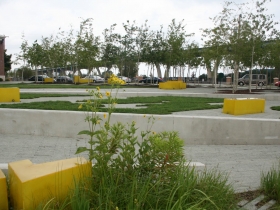