One More Chance for the Sydney HIH 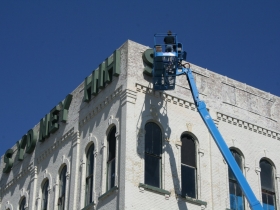 Despite developer John Raettig‘s last minute effort to put together a proposal to save a piece of Milwaukee’s history, the majority of the Milwaukee Common Council voted to grant the appeal of interim historic designation.  This vote would have opened the door for what surely would be a quick demolition, if not for an infrequently used parliamentary procedure stopping the action on the Sydney HIH at least until the next council meeting.

Throughout the council meeting Ald. Nik Kovac and Ald. Robert Bauman were the most vocal supporters of holding the file.  The arguments for holding the file, included among others, allowing the recently surface proposal to rehab the Sydney HIH more time to be fleshed out, and that there was no real value to move forward with demolition at this time.

Over and over again, Bauman made the case that “no harm is done by holding this file.”  Referring to Rattig’s proposal, Bauman argued that it was possible that by holding the file “a great benefit may accrue to the taxpayers of this city,” therefore the council should “at least give this an opportunity to play itself out.  His calls fell on def ears.

Pointing to Milwaukee’s most vibrant districts, Kovac explained, where we have preserved old buildings is where economic and population growth has occurred in Milwaukee.  Kovac also made the consequences of the decision clear, saying “we can’t undue demolition.”  Later in the meeting while explaining his commitment to growth, he also pointed out that this vote didn’t impact any potential development today, saying that if Kohl’s came calling tomorrow, “you can hand me the sledgehammer, I’ll be the first to take the blow…but that’s not what we’re discussing here.”

In a what can only be describe as a disconnected and unrelated series of statements, Ald. Joe Davis spoke about the value of Chinese investment to the city, the importance of the future generations and young entrepreneurs, and Milwaukee’s history with New Urbanism, all as arguments to demolish the Sydney HIH (I’ll just note that nothing in New Urbanism suggests the Sydney HIH should be demolished).  Nothing was made clear here as to why any of these reasons would suggest the Sydney HIH should be demolished, but eventually Davis made his desire for demolition clear saying, “we need development on that site, we need it fast.”

The most vocal critic of saving the Sydney HIH, and the representative of the district of which the Sydney HIH is located, Ald. Milele Coggs emphatically spoke against holding the file and the need for the building’s demolition.  She argued “it is a public nuisance waiting to fall down…We don’t need this building to be up one more day let alone three more weeks.”

Failing to convince enough members of the council to hold the file, Bauman asked for separate action to be taken on the file.  This passed with Bauman on the supporting side, which allowed him to ask Reconsideration to Enter it on the Journal, which has the net effect of holding the file until the July 24th, 2012 meeting of the Common Council and only requires three votes in the affirmative.  This passed on a vote of 3-11-1.

8 thoughts on “One More Chance for the Sydney HIH”