How Milwaukee welcomes -- and doesn’t welcome -- visitors to the city. Part I of four-part series. 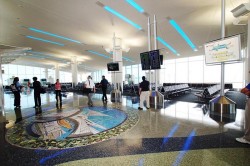 I was traveling under the Daniel Hoan Memorial Bridge on the Milwaukee Boat Line with a friend of mine. She had never viewed it from below, from the shipping canal. Looking up she said, “Why doesn’t it have sign on it saying, Welcome to Milwaukee?” She’s right.  But there should be a sign like this when you cross the bridge on land, too. Gateways to a city are like the front door of a home. They should be welcoming.

Milwaukee has four gateways: General Mitchell International Airport, the Milwaukee Intermodal Station (for trains and buses), the Lake Michigan lakefront and the Interstate Highway system. There are some welcoming features to all of them and there are things that could be improved.  The problem is that most Milwaukeeans (even city officials) never consider this issue because they don’t experience the city the way visitors do.

Milwaukee’s airport has become a pretty big deal. It’s history goes back to 1926, when Milwaukee County purchased the privately-run Hamilton Airport from Thomas Hamilton. It became known as Milwaukee County Airport. In 1940, a passenger terminal was built and in 1941 the airport was renamed for General William “Billy” Mitchell. The present terminal was built in 1955 and further expanded in 1984 and 1990. In 1986 the airport added its designation as an International Airport.

It’s one of the fastest growing airports in the nation. For several years running it enjoyed big increases in traffic, through 2011, when about 9.2 million passengers went through our airport. Figures comparing the first four months of 2012  to 2011 show about a 15% decrease. Most of this is due to the reduced number of flights, because Frontier dropped Milwaukee as a hub, in order to concentrate on their Denver operations. It’s projected that when Southwest completes it’s acquisition of Air Tran, further reductions will follow.

For the time being, our major volume carriers, Southwest, AirTran and Frontier, offer direct flights to many places in the United States that would have in the past required changing planes in Chicago, Detroit, St. Louis or Denver. Part of the growth is coming from North side Chicago travelers choosing to fly out of Milwaukee’s Mitchell International rather than Chicago’s O’Hare. Like it or not, our airport is often referred to as “Chicago’s third airport.”

Arriving at Mitchell, travelers encounter a neat, clean terminal with some great amenities. There are plenty of opportunities to stop, relax and enjoy a meal, beverage or a snack. I also have to mention one of the greatest used book stores on the planet. For those arriving, finding the baggage belts is not difficult. And the departures area, for other forms of transit, is conveniently nearby, with a number of options, all of them fairly inexpensive.

There are two through lanes and two stop, load and pick up lanes in the departure area, which are convenient for cars. The island in the middle provides a pick up place for Milwaukee County Transit System buses (the GreenLine and Route #80), van service, hotel shuttles, cabs and for returning local travelers, shuttle buses to both private and county remote parking. In addition, eight car rental operations are located in the parking garage across the departure lanes outside the baggage pick up area.

There are some long distance bus services that provide transit to the western suburbs and cities all over Wisconsin. One of the airport shuttles takes passengers out to the Amtrak Station where they can continue on to Chicago with stops in Sturtevant, WI,  Glenview, IL and finally Union Station in downtown Chicago. If the arriving traveler wants to ride the Amtrak Hiawatha Service to downtown Milwaukee they can do so by catching a Northbound.

What is the most cost effective way to get downtown for visitors?  Hands down, for a cost of $2.25, the GreenLine MCTS bus that leaves from the island in the departure area every fifteen minutes or so. To my surprise the Amtrak Hiawatha Service is next with a $7.50 ticket to the Milwaukee Intermodal Station.

Why not just hop on the free shuttle to your downtown hotel? Because, surprisingly, almost none of the downtown hotels offer a free shuttle. I found two large hotels — Comfort Inns and Suites and the Hilton — that provide shuttle service. In addition three of the boutique hotels — County Clare, The Iron Horse and Day’s Inn Hotel of the Arts —  will shuttle you to Mitchell

Cabs and the van services are door to door, but the cost is considerably higher. I got quotations from four of the van or limo services that advertise service to Mitchell from my East Side home (in the Downer area). Prices varied from a low of $20.15 with Super Shuttle to $40.00 from Airport Town Car. Yellow Cab and America Cab offered estimates from $32 to $37.

The average Milwaukee resident thinks of driving to the airport. But the most inexpensive way to get there is the MCTS bus. Yes, I know you can drive there in less time than the 40 minutes it took me from from the upper East Side, but remember you are still in the parking lot waiting for a shuttle bus when I’m rolling my bag into the terminal, and my $2.50 fare is far less than you’re going to pay per day to leave that car there.

If you insist on driving and want to leave the car at the airport during your trip, you do have a number of options. The remote parking at Mitchell is reasonable. In the supersaver lot, it’s $6.00/ day. (By the way, on the very helpful website for Mitchell, there is a display that will tell you how much room there is for all of their parking options) If you prefer, for close to the same price, private lots with shuttle service are available.

As a fellow traveler pointed out while we were standing in a line of hundreds of people trying to get through the TSA security in Los Angeles, the problem with today’s airports is that their designers never anticipated having the level of security we insist on today.  Milwaukee is no exception. and lines for security at certain times can be long and slow.

Nor is Mitchell very pedestrian friendly. Our airport is like a an island for pedestrians, hard to get onto and get off without a vehicle. Granted, for many travelers this is not an issue, but if you’re a resident or visitor who uses public transportation or a bike, this can be a big issue. But the connections to Downtown are very good, and the advent of the street car will improve things, helping travelers the last couple of blocks from the bus stop or the Intermodal station. Until it does, the trolley operates in the summer and services many downtown destinations.

And speaking of the Milwaukee Intermodal Station, it will be the subject of my next article on Milwaukee’s Gateways.

For information about Amtrak Hiawatha Service from Mitchell go to Amtrak’s website.

For information about airport-related transportation services, including links to rental car agencies, airline services with schedules and routing assistance and links to bus companies that provide long distance services to the surrounding area and across the state, go to the airport website.

10 thoughts on “Gateways: The Airport Story”