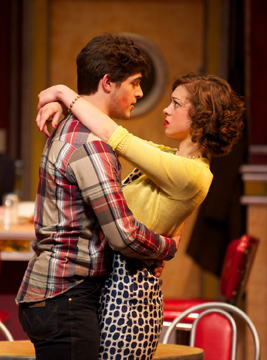 William Inge‘s Bus Stop is a play with a simple premise: A snowstorm strands five travelers at a diner in ‘50s-era Kansas, forcing their lives to intersect with each other and with the lives of the diner’s employees.

As Milwaukee Chamber Theatre does it, the execution is anything but simple. This complex, powerful play shouldn’t be missed.

The production’s origin story is worth noting. Bus Stop is the third MCT show to involve a nearby collegiate theater program. This year,UW-Parkside students and professors have joined the production. Their level of talent equals their professional castmates.

The process fits the show, as much of the play is about what its characters learn. Three of them are young: Elma, an innocent high school-aged waitress (Brenna Kempf); Bo, a 21-year-old Montana rancher (Ethan Hall); and Cherie, the nightclub singer he’s abducted to marry (Anne Walaszek). They take notes from the older folks, such as the boozy Dr. Gerald Lyman (Jamie Cheatham) and Bo’s pseudo-father/traveling buddy Virgil (Patrick Lawlor). As they teach, these older characters relearn what they once knew. No one leaves that diner without raised self-awareness.

Bus Stop isn’t all lectures and education. Director Lisa Kornetsky wisely focuses on the interactions. Once proprietor Grace (Jacque Troy) goes upstairs with bus driver Carl (Doug Jarecki)—to “lie down,” she says, with a hint of irony the young Elma misses—and sheriff Will (Dan Katula) ducks out as well, it’s just the five of them, forced into one another’s company. 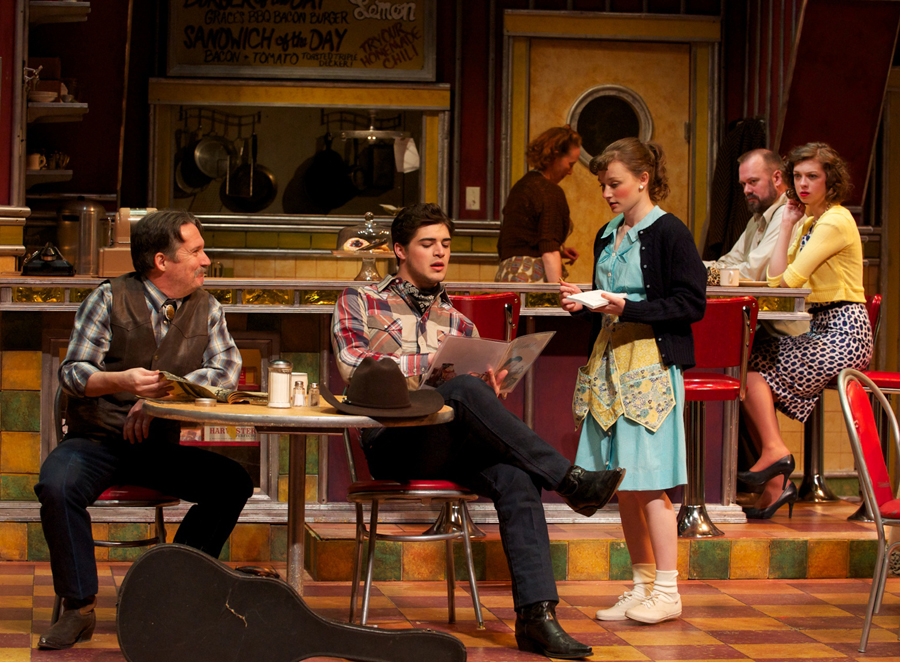 The cast of “Bus Stop” is compiled of both professional actors and theater students from UW-Parkside. Photo credit Mark Frohna.

And into one another’s problems. The diner’s not small, but everyone hears what everyone else says, from discussions of love and romance to detailed life histories. Wide-eyed Elma prompts much of the latter. Many of the play’s littlest big moments come from seeing the actors react to parallel conversations.

The conversations are often one-sided; characters talk past each other without even realizing it. Elma doesn’t pick up on Dr. Lyman’s barely tamped-down attraction for her or the desperation that oozes from his flirtations. The almost-equally naïve Bo doesn’t recognize Virgil’s romantic recommendations as rewritings of Virgil’s lost past.

A rich vein of humor runs through all the soul-searching and soul-baring. It comes from the intentionally sly observations of its older, wiser characters and from the naïve actions of its young ones. (Dr. Lyman is young in this respect only.)

Eventually, the road is cleared and the bus rolls out of the diner parking lot. But now, everyone’s going in a different direction.