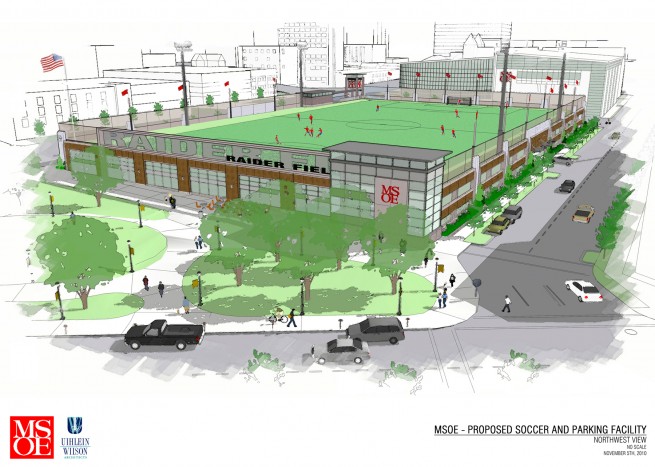 MSOE’s $28 million, 750-stall parking garage proposal received approval at the February 22nd, 2012 meeting of the Zoning, Neighborhoods & Development Committee meeting.  In addition to the parking ramp, the building will include an athletic field that will be used by two soccer teams during the fall, a lacrosse team during the Spring, and will be available for community use similar to how the Kern Center is open to the community for basketball on the weekends.  The development will include first floor retail space, and 26,000 square feet of green space that MSOE will develop and maintain in perpetuity.

The parking garage is proposed to be used for a variety of parking needs.  In particular, Dr Hermann Viets, President of MSOE, explained that the garage is “not just for students that are commuters, it’s also for those that need to get home on the weekend”.  Additionally, Dr. Viets explained that “we could provide overflow parking” for a potential theater proposal, and events during the summer.  During the first first five years of operation MSOE has agreed to lease 200 parking spaces to BMO Harris, but it appears that after five years it is likely MSOE will fully utilize the garage.  Dr. Viets made this clear saying, “we want to develop the campus”, and “we anticipate there will be some motion from surface parking lots into this development”.

The committee’s questions indicated that the most problematic part of the deal for them to accept was BMO Harris’ requirement to replace their 220 slot surface parking lot, a portion of which MSOE is acquiring to construct the parking garage.  To replace the parking BMO Harris made it clear that they needed to acquire what is a prime piece of real estate from Milwaukee County located along Water St. for a potential surface parking lot if the deal was to happen.  As part of the deal BMO Harris did agree to not build the surface parking lot for at least five years, and instead will rent 200 stalls from MSOE. But as Vanesa Koster, Planning Director explained, after five years BMO Harris, “can construct the permanent parking area”.  Alderman Murphy expressed his view of the deal saying “to me this seems like a great deal for BMO”, and added that “they just won the lottery”.

As he has said multiple times in the past, Alderman Nik Kovac stated, “if this lot get built, we’ve made a mistake“, and then he summed up the committee’s actions saying that “it does put us in an awkward position, voting to approve something [the surface parking lot], that we all hope doesn’t happen”.  All five files associated with the project were approved, with Alderman Michael Murphy abstaining because he is a shareholder of BMO Harris.  These files will now go before the full Common Council.