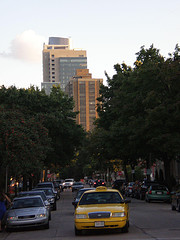 The City of Milwaukee is working on state legislation to allow the city to profit from the sale of additional taxi cab permits (to be called medallions) and address the perceived shortage of taxi cabs in the city. Currently under Wisconsin law, permit and license fees can not exceed the cost to issue said permits. This gives the Common Council and Mayor little incentive to raise the cap on the number of permits (currently capped at the seemingly random number of 321 since 1992), despite the fact that the permits are changing hands in the private market for between $80,000 to $150,000.

The proposed bill would allow first class cities (the state’s class system that includes only Milwaukee in the first class) to issue medallions to currently licensed operators for no more than $500, and would allow an annual public auction to issue more medallions. The new medallions are not to exceed an additional two percent per year for the first five years (six per year), and one percent thereafter. An additional provision in the bill would allow a first class city to collect a fee not to exceed 10% of the highest price paid at the most recent auction for the transfer of a medallion.

As with the current system, a medallion licensee would be allowed to enter into an agreement with another person to operate the motor vehicle (who is licensed by the city).

Assuming the bill passes, the bill could bring in a substantial amount of annual income for the city and raise the number of available taxi cabs. The bill protects the substantial investment made by many current permit holders, while delivering the city a source of the revenue from the market it created and increasing the number of cabs.

It remains to be seen if the auction process would result in the same market makeup, where Michael Sanfelippo owns 162 of 321 permits. Also of question is if the city would issue actual medallions, as New York City does annually.

The bill passed the Assembly yesterday, with a final vote of 55-39. The bill had a bi-partisan list of sponsors including Representatives Farrow, Zamarripa, Young, Stone, D. Cullen, Richards, Fields, Zepnick, and E. Coggs, and Senators Lasee, Taylor, and Darling.

Next up the Wisconsin State Senate.