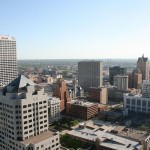 Welcome to the first weekly installment of Eyes on Milwaukee, a new column running down what’s happening in urban Milwaukee.

I recently wrote an article on the taxi cab legislation making its way through the halls of the Wisconsin State Capital. While the public auction format wouldn’t erase the city’s cab shortage overnight, it also wouldn’t erase the value of the permits currently held. Some will take issue with the bill as it won’t significantly drive down the barrier to entry to becoming a self-employed taxi cab operator, but there doesn’t appear to be a fair option out there that will. The legislation seems like the only logical way to fix the shortage over the long-run, and has the added bonus of giving the city a market-driven revenue source.

Many other cities with a medallion system lack accompanying legislation that allows annually for more taxi cabs on the street (if the market dictates such). If they do issue new medallions, it appears to come at once, instead of annual increase. The net result? Skyrocketing transfer prices, like the two $1,000,000 transactions that took place in New York City in October.

It strikes me that in an ideal world, likely one that would take well over 10 years to achieve with this bill, the price of the medallions would trend towards zero as the supply is constantly increasing. The bill will ultimately let the market dictate the number of cabs on the road, which is good for riders and drivers.

In the Common Council races, incumbent Bob Donovan prevailed with 60% of the vote in his district. The drastic redistricting changes to his district appear to leave him unaffected. Alderman James Witkowiak finished second behind Jose Perez by nearly 14 percent (49 – 35.5), but if I had to guess Perez will be the one picking up almost all of Angel Sanchez‘s 15.5% third place share. As Johnny Thomas goes to show though, things can change quickly between now and the next election.

The most intriguing County Supervisor race will be David Cullen versus Dan Cody in the 15th. I’ve yet to understand why Cullen is leaving his Assembly post to run for County Supervisor, but he’s got quite the war chest to spend against Cody. In retiring Lee Holloway‘s Fifth District it’s anyone’s guess as to who will prevail in the general election, with Stamper and Coggs-Jones advancing, each without 30% of the votes.

A similar up for grabs situation seems to be presenting itself in the only county-wide race, Milwaukee County Judge – Branch 17th. Carolina Stark won the primary with 35.3% of the vote with incumbent Nelson Phillips III taking 34.0%, Chris Lipscomb Sr. came in a close third with 30.8% of the vote.

The Journal Sentinel has all of the results.

The Beerline B Apartments opened on February 17th, just a day after Mandel Group broke ground on Phase 2 of the North End across the river.

Greg Marcus, amongst others, is pining for Milwaukee to follow the Oklahoma City model of a sales tax to pay for a host of sports and cultural attractions.

I recently finished My Kind of Transit: Rethinking Public Transportation, which if you’re looking for a book to think about how public transit functions for tourists, check it out. I started reading Allies of the Earth: Railroads And the Soul of Preservation.

If you’re into reading, and if you’ve made it this far you must to be, check out the Urban Milwaukee Book Club coming up on March 6th.

Every week I’ll pick a favorite photo submitted to the Urban Milwaukee group on Flickr. Lights Along the Menomonee by John December

One thought on “Eyes on Milwaukee: Taxi Cabs, Elections, and More”