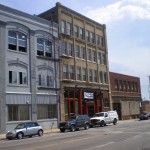 Momentum, development, and a touch of new life on South 2nd Street in Walker’s Point?  Yes.  The complete street redesign for S. 2nd St., was just the start.  Although there is still work to be completed, the street has re-opened to two-way traffic, the bike lanes have been painted, the grass has been planted, and the wider sidewalks are in place.  And now there are signs of new life on the street.

Three new businesses are preparing to open or have opened recently on S. 2nd St., including two restaurants, and a bike shop, all of which are establishments that could take advantage of the new street improvements.  The first business to open, a new restaurant, INdustri CAFE, recently opened in the former Fuzion Cafe location, and of note, the owners included concepts for the street redesign in renderings for the new facility, indicating a desire for cafe seating on the street.  Aytan Luck is working to open a second location for Truly Spoken Cycles at 219 S. 2nd St. Luck told UrbanMilwaukee they hope to “make it easier for people who live near to downtown to get their bike serviced,” and explained that they wanted a location that people from the neighborhood could walk to if they needed repairs.  He added that “certainly the bike lanes made a difference” in regards to choosing a location.  And yesterday Molly Synder, of OnMilwaukee.com, reported that Zak’s Cafe is soon to open at 231 S. 2nd St.

In addition to the new businesses opening, a green development project is being planned just down the street from these ventures.  The Clock Shadow Building continues to receive approvals from the city and could become a new anchor on the street in the near future.  This project has a solid list of tenants lined up, including Clock Shadow Creamery, Aurora Walker’s Point Community Clinic, The Healing Center, and CORE El Centro.

UPDATE:  The Clock Shadow Building should break ground this Spring… more on this soon.