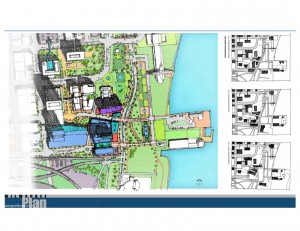 Department of City Development staff presented the Downtown Plan Update at the September 15th, 2010 Zoning, Neighborhoods & Development Committee meeting.  Similar to the City Plan Commission meeting, staff presented the overall themes and the eight catalytic projects, which are geared towards increasing density and connectivity throughout downtown, whiles creating a sense of place.

Alderman Willie Wade raised a few questions pertinent to the plans catalytic projects.  In particular he asked how the plan would address the lack of a positive downtown gateway experience, and whether or not the city had weighed in on what to do with the O’Donnell Parking Garage.

Responding to Alderman Wade’s questions, Rocky Marcoux, Department of City Development Commissioner, explained that “the city has not weighed in officially” regarding the parking garage, but then spoke at length regarding the lakefront catalytic project saying the area near the garage, specifically the entrance way to the lakefront from the Hoan Bridge, is “a really disjointed presence.” He added that “we should be looking at the potential relocation of the bus terminal,” and emphasized the importance of this project stating that this connection to the lakefront attraction is “the piece that’s missing.”

Alderman Michael Murphy brought up the role of public art and its role in the plan. Greg Patin, City of Milwaukee Planning and Development Manager, responded saying it is an “integral part”, and that “we see that as one of the things we weave together.”

Pat O’Brien, President of the Milwaukee Development Corporation and the President of the M7, praised the city’s work on the plan, but raised some items.  He warned that the plan should focus development on the existing catalytic projects leftover from the previous plan, including the Pabst Brewery and the Park East.  Additionally he asserted that the city should be careful not to destabilize existing downtown projects, and that density is an important goal, but the projects should be prioritized. When asked by Alderman Murphy if his organization expects or want direct subsidies for projects he responded “that would be a good thing.”

The plan was passed unanimously by the committee and will now go before the Common Council.

More details on the plan can be found here.