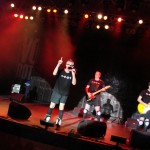 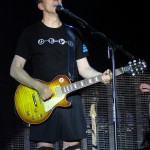 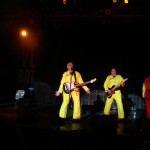 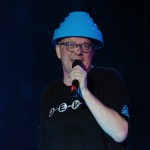 One night in October of 1978, I sat up after my parents had gone to bed to watch Saturday Night Live as most teenage kids did at the time. The Rolling Stones had just blown the joint up the week prior, performing a reckless version of “Shattered” that had everyone talking at school the following Monday.

On this particular night, though, a band from Akron, Ohio would come out and totally deconstruct the Rolling Stone’s classic “Satisfaction” while clad in bright yellow jumpsuits, looking like radiation control technicians from a nuclear power plant. It was a polarizing moment; Devo was either sacrilegious or astounding, depending on where yer head was at.

Today, so many, many years later, Devo really does have “Something For Everybody.” My wife Val and our 11-year-old daughter Vanessa came along for the show at the Miller Oasis, forgoing the usual July 4th fireworks picnic bizzyness to see Devo with me. And the three of us loved every minute of it.

Devo opened up with “Don’t Shoot (I’m A Man),” the lead-off single from “Something For Everybody,” their first elpee in two decades, wearing new, sporty and comfy looking gray jumpsuits, reportedly inspired by Kim Jong Il. They sounded like they always have; a humanized machine pounding out dance music for dorks. Soon, the masks came flying off as they introduced “Peek-A-Boo” and everyone in the crowd did some quick internal math equations, like “Lessee… 20 years since their last elpee, and they’d been around for about 15 years before that… dang, they’re old.”

Devo knocked out a few more new numbers from the new elpee and then hit “That’s Good” (complete with the too-suggestive-for MTV-at-the-time donut-penetrating french fry video rolling on a giant screen behind them), “Girl U Want” and “Whip It” all in a row, which of course whipped the crowd up into a state of frenzy, and kept it going with a mesomorphic version of “Planet Earth” powered by “Bob 1” Mothersbaugh’s guitar.

They left the stage with the crowd roaring on its feet. A short video presentation came up on the giant screen, talking about the enormity of The Solar System, The Milky Way, The Universe. When the video wrapped up with “Please welcome back to the stage your fellow travelers in space and time … Devo” they stepped back out in their old yellow radiation suit costumes and dove into the jerky rhythms of their version of “Satisfaction,” followed by an extremely wound-up tight “Secret Agent Man,” highlighted by pulverizing rhythms and Mark Mothersbaugh squeezing Soyuz 7 sounds from a bank of synthesizers.

I’m was screaming the “YEAH YEAH YEAH” part and I noticed Vanessa looking at me, slightly astonished. She’s only seen me do this in the car. Seconds later, she’s right there with me. The words are easy and fun to sing/scream. She recognized “Mongoloid” because I sang it every Sunday during Packer games whenever Mason Crosby lined up to kick. Take a look at Crosby next season and you won’t need to ask why. Mark Mothersbaugh is slouching around the stage simian-style with pom-poms as Bob 1 takes the vocals, Vanessa and I singing along.

It was a hot and sticky night at the Miller Oasis and those yellow radiation suits the guys were wearing couldn’t have been too comfortable, so following “We Are Devo” they all tore off the yellow suits (threw them into the crowd) to reveal matching black Devo t-shirts, black shorts and kneepads… like roller derby outfits without the helmets.

The sound of something like wires violently uncoiling is only a component of the noise-damage unleashed during “Smart Patrol/Mr. DNA” with the Mothersbaugh brothers trading vocals, Mark Mothersbaugh racing back and forth from center stage to the synth bank. Following the chugging“Gates Of Steel” Devo left the stage again with their Corporate Anthem video running.

When the band came back, Mark Mothersbaugh had a ridiculously-oversized Groucho Marx mustache hanging from his face, and he led Devo into a pounding version of “Freedom Of Choice.” He left again… to come back as Booji Boy. In a priest’s robe. With Booji’s name stitched across the back of the shoulders. And Booji sings “Beautiful World” in that innocuous high-falsetto of his. Booji tells a story of how he moved from Akron to Hollywood, and how one day he met Michael Jackson and went to Neverland to play with the llamas. Booji said he felt bad that Jackson was dead, that he was a good man, and predicted aloud that if Jackson could rise out of his grave like he did in the Thriller video he’d say “It’s a beautiful world.”

That’s when Booji Boy lifted up his priestly garment to reveal a black fanny pack with a yellow cross positioned over his crotch. Booji unzipped the crotch-pack, dug his hand deep into it, and pulled out a handful of brightly colored rubber balls with smiley faces on them, and bounced them out into the crowd. People scrambled to catch them as Booji kept finding more to throw and the band repeated the chorus “It’s a beautiful, beautiful world” over and over, putting a surreal punctuation mark on a brilliant, brilliant performance.