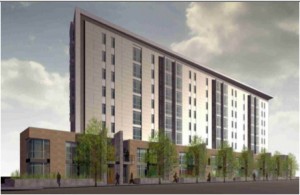 Wednesday night the Greenwich Village Neighborhood Association held a meeting to discuss Mercy Housing Lakefront’s East Side apartment proposal.  Alderman Kovac started the meeting out explaining that “the process begins now,” but if this meeting was any indication then it was the end as this project was voted down by the neighborhood group.

Mercy Housing Lakefront attempted to explain that this is really workforce housing, not low-income housing.  Meaning that the vast majority of the units the household income levels could be as high as $45,000 a year.  Lisa Kuklinski, of Mercy Housing Lakefront, stated that, “this proposal is for workforce housing, not Section 8 housing, and that tax credit development “subsidizes the buildings, not the people.”  The building would have studio apartments starting at $325, and at the high-end three bedroom apartments which could rent for as much as $1,050 a month.  Of the 83 units only eight would target entry-level wage earners, essentially people making about $10 an-hour, eight would target retail managers-level wage earners, and 67 units could include experienced technicians at Columbia St. Mary, entry-level teachers, and entry-level police officers.

Responding to questions regarding the impacts and benefits of the development David Lyon, regional director of housing development for Mercy Housing Lakefront, responded that the residents will be “living and spending their money” in the neighborhood.  He added that “we pay full boat property taxes,” and Lisa Kuklinski followed up with “where we are present, the neighborhood has improved.”  Additional, questions came up regarding the land sale process, the buildings height, parking, and traffic.

The group took an informal vote with the majority of the crowd voting against having the city continue on the path towards extending a purchase option.  The vote appears to have had the desired impact of stalling or halting the project as had the project been moving forward at this point it was to be on the agenda for the March 22nd City Plan Commission meeting.