Nearly One Gun Crime Per Household in West Milwaukee

Statistically-speaking, everyday since January 2006 the Village of West Milwaukee has supplied at least one gun used to commit a crime in the City of Milwaukee.

Logistically then, it seems the easiest solution would be to simply build a fence around West Milwaukee, and check for guns at each entry/exit checkpoint.  Obviously that’s a pretty stupid solution for a whole lot of reasons.  However, it would appear that doing so would drastically reduce the amount of gun crime in the City of Milwaukee.  Unfortunately, it’s not that simple.  People want guns, and will seek out a place to buy them.

Statistics and Iron-Curtain-style solutions aside, what is going on in the Village of West Milwaukee?  It turns out that a single gun store known as Badger Guns (and formerly as Badger Outdoors) sells an awful lot of guns.  Selling a lot of guns in and of itself isn’t a problem.  The problem with Badger Guns is how they sell their guns, and who they sell them to.

Of those previously mentioned 1,880 guns, the shooters of those weapons were certainly not all first time criminals.  In fact in a recent operation conducted by the Milwaukee Police Department numerous felons were frequently observed going in and out of the store.  From those observations, MPD was able to seize 12 weapons, and discovered that felons have been using the shooting range at the store for target practice.

Police Chief Edward Flynn had some choice comments on the matter and owner Adam Allan that ran in a Journal Sentinel story that brought the problems with the store to light.

“I had an enough-is-enough moment,” Flynn said. “They know to whom they are selling, they know what is happening with their product, they know citizens in Milwaukee are dying, and they don’t care.”

“(Allan) clearly doesn’t care a damn about the demographics of dead Milwaukeeans,” Flynn said. “To try to wrap himself as a victim of racism is not only absurd, it is obscene.”

Milwaukee County District Attorney John Chisholm, who appears to be just about as big of fan of Badger Guns as Chief Flynn, has offered up straight forward solutions on how Badger Guns can clean up their act.

Milwaukee District Attorney John Chisholm said Badger can and must do more to prevent illegal gun sales. As the former head of the office’s gun unit, Chisholm has intimate knowledge of the store’s operation.

“All we are asking is that they be professional,” Chisholm said. “Their public service would be to do everything in their professional skill to prevent a sale to someone who will turn around and put that gun on the street to commit violence. They have the skill to do it. I suspect they choose not to do that more than they do.”

Allan said he doesn’t want to have felons in his store.

“I would prefer that they not be here, but unless they put an F on someone’s driver license, I don’t know they have a felony,” he said.

Chisholm countered that Allan could require everyone who enters his store to show ID and be checked in a publicly available database for felony convictions. At a minimum, felons should be run so they cannot be allowed to take target practice at the store, the district attorney said.

If the gun store were a tavern in the City of Milwaukee it likely would have been closed by now.  Frequently all it takes is one shooting and a tavern license is at the very least suspended by the Common Council Licenses Committee.  Ironically, it’s likely that a gun supplied by Badger Guns has been used in at least one shooting that resulted in a bar being closed in Milwaukee. But alas, the store is in the Village of West Milwaukee and here we are.

Adam Allan, who could just as easily have the police off his back by complying with suggestions from Chisholm, appears more content to simply put up inflammatory signs indicating that MPD is the bad guy, instead of his business practices, which from all reports seem to be rather negligent. 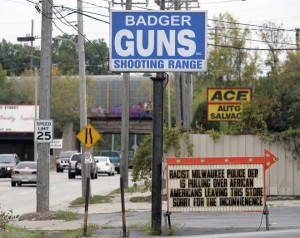 The eloquent sign reads “Racist Milwaukee Police Dep is pulling over African Americans leaving this store. Sorry for the inconvenience.”

Crime in Milwaukee is an oft-criticized facet of the city by suburban residents, and it’s shameful to see a suburb willing to profit from fueling the fire.  It’s time for Badger Guns to clean up its act, so MPD can continue to work to clean up the streets.

Kudos to the Milwaukee Journal Sentinel for bringing the situation forward.