This came in an e-mail sent to MilwaukeeWorld:

Regrettably, I purchased a hand-signed Miro lithograph in an eBay transaction earlier this month from kfinearts who is, as you know, James Kennedy.  I suspended my disbelief based primarily on the feedback from another purchaser who returned an item for a full refund.  Between that and the PayPal buyer protections, I was not terribly concerned about losing my money — and I still am not concerned about that.

What I am concerned about is the possibility that others will be defrauded by James Kennedy.  To prevent that from happening, I have reported the incident to both eBay and PayPal along with a recommendation that Mr. Kennedy be barred from both.

The purpose of my note to you is to seek your permission before including a link to your website in the feedback I leave for kfinearts.  I want others to have information that I was lacking before entering into any dealings with kfinearts and/or James Kennedy.

Thank you in advance for your prompt response.

What’s this? It’s a tavern occupancy application for Passions, at 200 East Washington Street, a tavern with a history so gay it was sometimes flaming — literally. And who is listed as the “owner on permit”?

According to the document, it is Leon Young, of 2224 N. 17th Street. Or, shall we say, Honorable Leon Young, for he is also the Representative to the Assembly for the 16th District of Wisconsin.

“Passions” (don’t you love the name, darlings?) is in a building formerly known as Fanny’s, a popular lesbian hangout. The building’s owner was (and still is, according to city assessment records) Sharon Dixon, who did time for her involvement in a regrettable incendiary episode at the bar in 1997. The fire damage was repaired by 1998, but I haven’t bothered to step near the place since then except to note a very pleasant garden in a factory building just to the east, as I recall.

I’ll drop in soon and see what’s up. I invited Rep.Young to join me if he’s in town. I would like to know if the bar is a commitment for him, or merely a “passion” fancy. 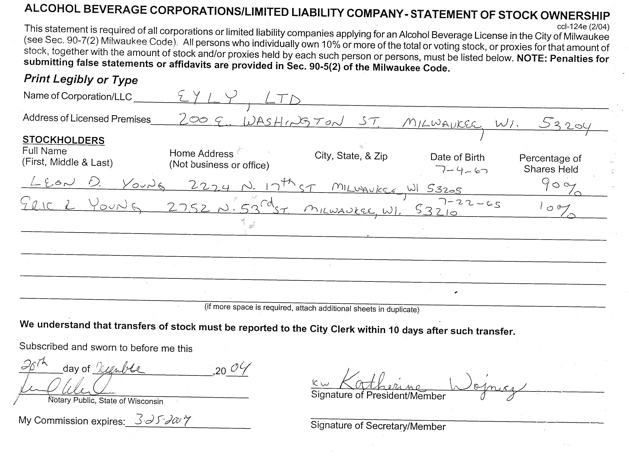 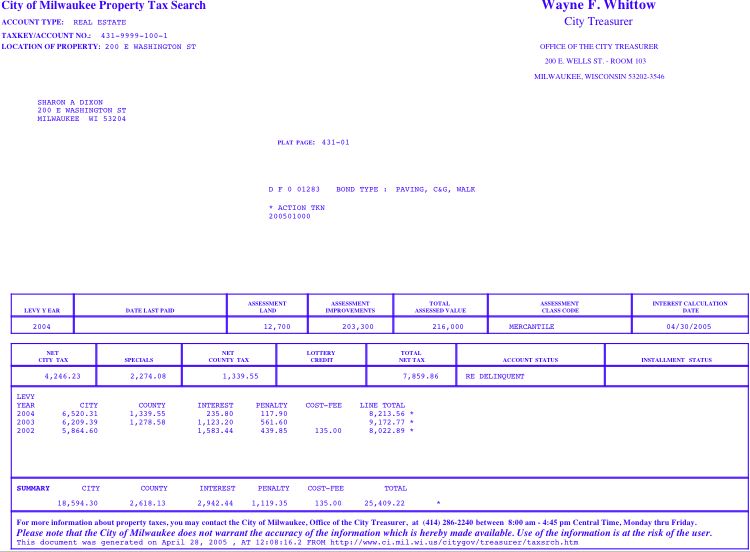 Monches Millpond Outrage (With A Lesson in Tolerance from Chief Monches)

A pair of Town officials with a large dog confront a black man and his family while they are fishing from a bridge. The official with the dog explains he called out the hound to frighten away the people lest the other official would harm them. “Colored people” are afraid of dogs, he says.

Stapleton was also charged with obstruction of the officers investigating the Tuesday evening incident that occurred at a bridge at the south end of the historic Monches Millpond, part of the Oconomowoc River.

Weber was also charged with reckless use of a weapon – a felony.

Fisherman Mark Bratton is certainly unnerved, and we should all be profoundly embarrassed.

Stapleton has been a loose cannon for a number of years, it appears.

In 2002 Stapleton was observed deflating the tire of Paul Todarello of Hartland, who drove his brand new Acura to his child’s soccer club.

Todarello said he did not know he had parked illegally – on Stapleton’s property, which borders the club on two sides. It cost him $50 to get road service for his vehicle.
At the time, then Town Clerk Jeanne Anne Frederickson said, “this was just unfortunate. [he] works so hard for the community. … I think the frustration level just built up.”

Stapleton’s long-running feud with the soccer club seems to have paid off for him. In 2002 the Town paid $5,400 to plant 33 six-foot trees as a screen or buffer between his home and the soccer club grounds. The town also paid $5,788 for a 700 foot long, five foot high fence to further screen his property from the club and street, and to discourage illegal parking of the sort that cost Todarello the air in his tire.

How Did the Town Of Merton Get Stuck With A Guy Like Stapleton?

We get a clue about how a relic like Terry Stapleton could be a public official from the Town Of Merton Website itself.

“The unincorporated villages of Monches, North Lake and Stone Bank are clannish, dominated by a few old-line family names and made up of blue collar workers, historically resistant to change. The core of the villages is the church and the social gathering place is the local tavern.” – Jeanne Anne Anderson, former town clerk, 2004 from town website.
I think that should explain a good deal.

Monches Millpond dates to the early 1840’s and was an important source of power for early Waukesha County. It has provided great fishing to American Indians and Whites for generations. Mark Bratton tried to integrate the fishing spot in 2005, apparently unsuccessfully.

Perhaps the story of Chief Monches might be instructive here:

*Origin of the name Monches *(from Town of Erin IMMIGRATION & SETTLEMENT

Away back in the early “forties” (1840’s) , when the settlers came in, there were several families of the Menomonies scattered along the Oconomowoc river from below Loew’s Lake on the south, to Friess Lake on the east.

Old Monches was the chief of this tribe at the time, and was always on friendly terms with the white people. Living in the vicinity of the hill, [Holy Hill] whenever by chance it was alluded to, he would become greatly interested and loved to tell of how his tribe was knowing to the fact that white men once came from Lake Michigan many years before and planted a cross on its top. When speaking of the event, he would always illustrate his story by marking the shape of the cross, either in the snow, sand or whatever soft substance happened to be most conveniently at hand.

After the death of both Kewaskum and Monches, their remains were subjected to the most shameful and ghoulish usage, and at the hands of a race for which they had shown great friendship, while living. Both shared a similar fate, for each, after he had been buried over twenty years, was dug up from his humble, shallow grave by relic hunters and his bones left to bleach upon the surface or to be scattered by the winds of earth.

Old Monches died about the year of 1848, while living by the Oconomowoc river near the residence of the late John Whelan of Erin. Nearly thirty years later, some curiosity seekers found his grave, and some others of his tribe on a little knoll (Blanket Hill) about a half mile east from the village that bears his name. They unearthed his remains and those of others and left their bones uncovered, until a hand more humanely disposed reinterred them.

Teach a Child to Fish

This summer we should make a community-wide effort to see that as many central city children as possible can be brought to the lovely Town of Merton to learn the joys of fishing in the region’s plentiful lakes and streams.

Please contact your favorite central city social service agency or church to see what you can do to to help Teach a Central City Child to Fish. Perhaps you can spare a boat or a canoe for a day-long outing where central city children could paddle around and around delightful North Lake and other waterways in the affluent community.

We also should welcome the ten black residents among the Town of Merton’s 7,962 residents to join us in this outreach.

It would be a good thing for everybody.

The Following three headlines appeared on Friday April 15th . All were about the Journal Communications first-quarter earnings report.

Which is the most accurate of the headlines? The uncorrected first one, since it conveyed the most important and pertinent point: Although the company’s earnings increased 10.9% for the quarter to $17.4 million, the sum included a one-time after-tax $4.8 million gain on the sale of its NorthStar print group.

Operating earnings, which are the earnings from running the business as distinct from selling parts of the business off, were indeed down, from 19 cents to 17 cents, which is the most significant economic reality of the company’s earnings announcement.

Since the company went public in 2003 its stock has gone pretty much nowhere. However, a considerable capital shift has occurred since the time the formerly employee-owned company unloosed its stock on the general public.

Although the stock has not excited the general public, it has attracted the attention of money managers.

Unfortunately, money managers are often more fickle than individual investors, and when they decide to dump a stock, they tend to do it precipitously and en masse.

Milwaukee writer Jamakaya reminds us that the Milwaukee Journal Sentinel has been criticized by a Shepherd Express writer for its lack of women writers. She wonders if there is a Glass Ceiling (or is it Glass House?) issue here:

I just saw your item about Catherine Nelson. What a hoot!

I had a woman’s rights convulsion a few weeks back and wrote the following
letter to the ShepEx. Needless to say, they didn’t publish it, no doubt
especially given the latest intrigue going on there! I believe what you say about
Nelson being dreadful (and have heard it elsewhere), but my letter was another
diatribe about their sexism. I’ve put this letter on my blog and you can link to
it if you like. I also linked back to your Shepherd stories:.

In your April 7 edition, my favorite columnist Joel McNally wrote about a
seemingly previous newspaper job: “The best jobs at the newspaper, including the
political reporter, the movie critic and most of the columnists, are still
held by white males.“

Mr. McNally is far too reliable a progressive voice to be tweaking his former
employer, the Milwaukee Journal Sentinel, on this account. After all, despite
its regrettable corporate hegemony, the Journal Sentinel does publish a wide
range of women’s voices, from witty TV critic Joanne Weintraub to business
writer Tannette Johnson-Elie, from architecture maven Whitney Gould to book
critic Geeta Sharma Jensen, from chief obit writer Amy Rabideau Silvers to arts
commentator Jackie Loohauis, from Wisconsin treasure Jackie Mitchard to
op-edsters Barbara Miner, Maureen Dowd, Kathleen Parker and others.

Could McNally possibly be referring to the supposedly progressive,
alternative Shepherd Express, which in its 24 year history has managed to have only one
woman – one – the talented Anthe Rhodes, in an editorial position that isn’t
preceded by the word “assistant”? Where the only woman columnist in almost 25
years has been a forgotten byline who briefly contributed the painfully
self-conscious column called “Girl”? Where the turnover of women is mind-blowingly
swift while the old white boy mainstays are destined to die at their desks?

I mean no disrespect to the few women who valiantly contribute to this paper.

Overall, however, it is a continuing scandal that Milwaukee’s major
alternative weekly serves women so poorly. If McNally can’t say it openly, I will: you
should be ashamed of yourselves.