"Expanding Medicaid is a no-brainer and I’m going to fight every single day until we get this done!" 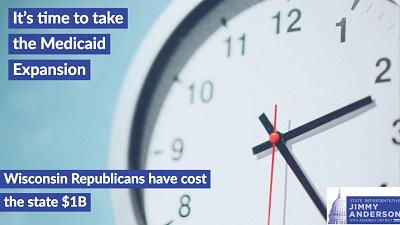 “It’s been 1,944 days since Wisconsin has been eligible to take federal dollars to expand healthcare coverage. That’s not just healthcare for 80,000 people it’s money for programs that would end the waitlist for children with disabilities to receive personal care, it’s money to support the Healthy Women, Healthy Babies initiative that fights maternal and infant mortality, it’s money to improve access to dental care for communities across Wisconsin.

“Wisconsinites are tired of subsidizing quality health care for our neighbors in 36 states, while getting nothing in return for thousands of families right here in Wisconsin.

“I talk about the Medicaid expansion every day because it truly is the single biggest impact we can have in people’s lives. There’s so much we can do to provide better healthcare to more people, while improving the overall state budget. Expanding Medicaid is a no-brainer and I’m going to fight every single day until we get this done!”

"It is shameful that our state’s Republican lawmakers have once again disregarded our Governor’s attempt to address gun violence in our state."

"We are long overdue for common-sense measures like Extreme Risk Protection Orders."

"This isn’t simply a legal mandate, it is a moral one."