Tickets will go on sale on Saturday, April 13, 2019 at 12:00 p.m. CDT at Summerfest.com and Ticketmaster.com and include admission to Summerfest.

Billie Eilish might just make you believe in magic…It’s the best explanation for this siren whose breathy, soulful, and spirited croon immediately casts an unbreakable spell. The Los Angeles songstress resembles something of a fairy tale heroine—albeit one with a Tyler, the Creator obsession, Aurora inspiration, wicked sense of humor, and inimitable fashion sense filtered through a kaleidoscope of hip-hop, grunge, and glam tendencies ready to practically levitate above any runway.  It’s this kind of je nais sais quoi that fueled the meteoric rise of her debut single “ocean eyes.”

Eilish just scored her first number one album on the Billboard charts with “WHEN WE ALL FALL ASLEEP, WHERE DO WE GO?”  The album follows the success of Eilish’s first release “dont smile at me,” which spent 67 weeks on the Billboard charts.  The nine-song set was issued in 2017 and generated more than 1.2 billion on-demand audio streams for its tracks.  In 2018, Eilish charted her first five entries on the all-genre Billboard Hot 100 songs charts and has notched three more debuts in 2019.  In addition, Eilish is the first artist born in the 2000’s to have a number one album on the Billboard 200 chart and is the youngest artist to hit number one since 2015.  She also contributed a track to the second season of 13 Reasons Why, collaborating with Khalid on the hit single “lovely,” which charted globally.

Tickets for Billie Eilish can also be purchased at the Summerfest Box Office in person, Ticketmaster Ticket Centers, and at select Walmart stores.  Patrons may also utilize “ticketfast” at Ticketmaster.com to print barcoded concert tickets from home.  Convenience fees may be added to all purchases.

About Summerfest presented by American Family Insurance
Following its 1968 debut, Summerfest presented by American Family Insurance has evolved into what is now recognized as “The World’s Largest Music Festival” and Milwaukee’s cornerstone summer celebration, hosting the music industry’s hottest stars, emerging talent and local favorites along with approximately 850,000 people from Milwaukee and around the world each year for an unforgettable live music experience. During the festival, the spotlight shines on over 800 acts, over 1,000 performances, 11 stages, delectable food and beverages and interactive activities, all in a world-class festival setting. Summerfest 2019 takes place June 26-June 30 and July 2-7, 2019, closed on July 1.  For more details, visit Summerfest.com, Facebook.com/summerfest, or Twitter: @Summerfest. 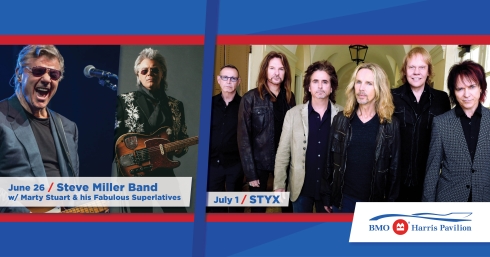