Washington, D.C.—Today, Congressman Jim Sensenbrenner (WI-05) voted to establish a balanced budget amendment to the Constitution of the United States. The resolution failed to meet the two-thirds threshold necessary for passage. 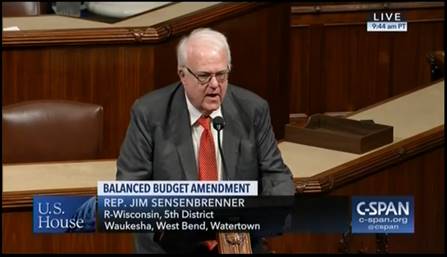 “Mr. Speaker the reason we have a big deficit is not due to a lack of tax revenue. It’s due to the fact that Congress spends too much money. Now let me repeat that. The deficit and the debt are not caused by a lack of tax revenue. It’s because there is too much money that is authorized and spent right here in the Congress of the United States. This proposed constitutional amendment will give us the discipline that we have not had as we’ve sat and watched the deficit go up and up and up and away.

I would say that doing what we have done, which means spending money on ourselves and sending the bill plus interest to the next generations is bad economics, but it’s also immoral. Now I have a grandson who is a little bit more than a year old, and unless Congress stops doing this, he’s going to end up having a debt that will boggle the mind that he and his contemporaries are going to have difficulty meeting.

So what do we need to do? Number one: We need to stop passing bloated omnibus bills, I voted no proudly on the omnibus bill, which busted the budget and added to the debt. We need to start getting honest about the fact that entitlement programs are spiraling out of control. That doesn’t mean cutting entitlement programs for existing people. It means slowing down their growth rate. But that’s something that nice people aren’t supposed to talk about, particularly here in Congress, but it’s something that is necessary if those entitlement programs are going to be worth anything for future generations when they may need them, rather than dealing with the present generation.

Now I know we can all count up our votes, and people vote now, and we are not going to be running in the future but the time has come to think about the future. That is why this constitutional amendment ought to be passed. Congress can’t discipline itself. The only thing that can discipline us is saying what Congress can’t do in the United States Constitution just like the first and second amendments. I yield back.”