Previously: Johnson delayed and then voted against the American Rescue Plan which included the up to $300-per child-per month tax cut payments for working families, $1,400 stimulus checks, and critical relief for schools and small businesses

With 39 million American families next month set to start receiving monthly tax cut checks of up to $300-per child-per month from the IRS, Ron Johnson is reminding us all that… he did his very, very obstructionist best to stop that from happening.

On Friday, Johnson was asked for his thoughts about the expanded child tax credit program, which is expected to “reduce the number of children living in poverty by more than half, according to the Center on Poverty and Social Policy at Columbia University.”

In response, Johnson slammed the tax cuts for working families as a “kind of [social] engineering” — never mind that Johnson proudly supported the 2017 tax law that “engineered” a massive giveaway which sent more than 80% of its benefits to large corporations and the richest Americans. And Johnson patronizingly added that he favors an outcome where “mothers can stay with their kids” — a breathtakingly out-of-touch values statement amid a pandemic that has caused a disproportionate spike in the unemployment rate for Wisconsin women.

Back in March, Johnson infamously delayed and voted against the American Rescue Plan which secured the expanded tax cut provision — in the process delaying critical support for working families, schools, and small businesses, including $1,400 stimulus checks.

“Every day, Ron Johnson reminds Wisconsinites that he isn’t just wildly out of touch, but actively working against their best interests in the Senate,” said Brad Bainum, American Bridge 21st Century spokesperson. “That’s why he backs tax giveaways to his big corporate donors but delayed and opposes this tax cut that will lift up 39 million working families.” 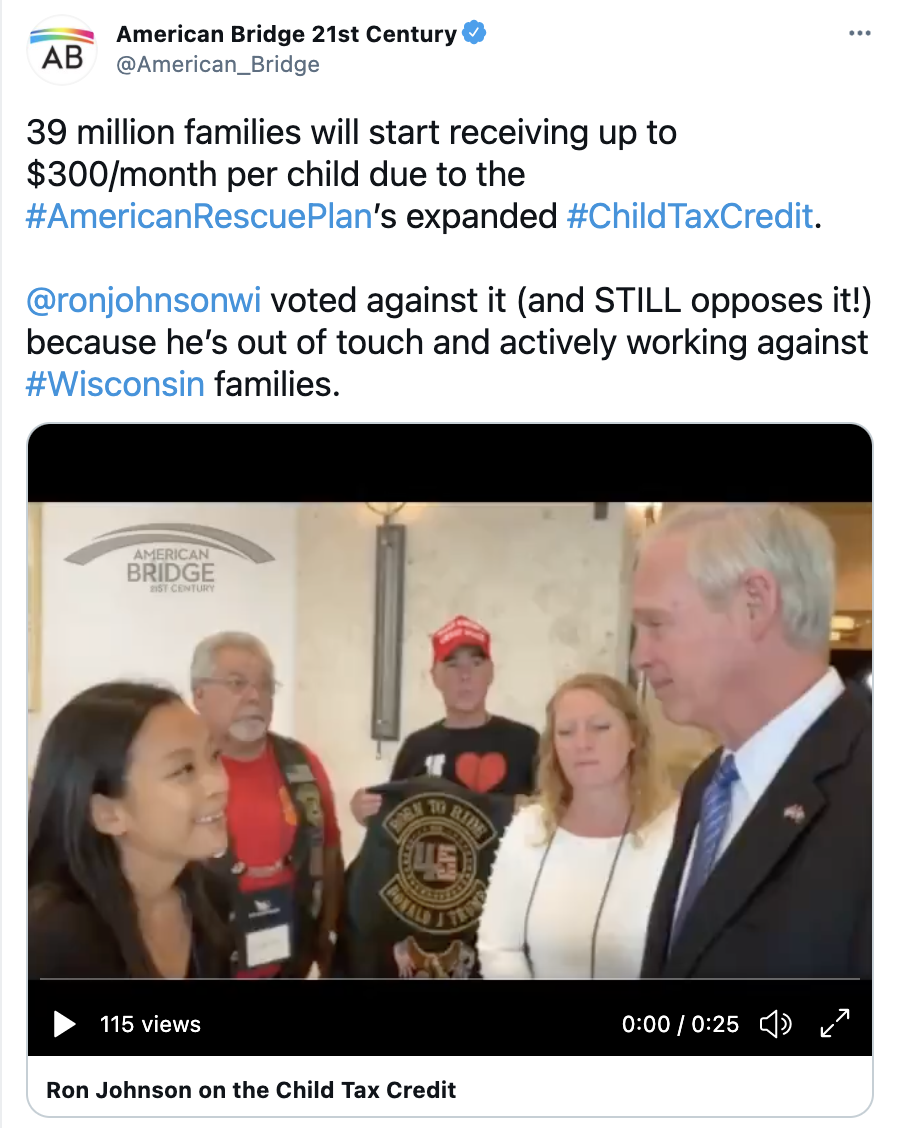 Q: What about the child tax credit?

JOHNSON: Oh, yeah, that’s — to me, that’s kind of engineering through the tax code. I’m all for families, but I’d rather lower the tax rate for everybody and allow families to be able to keep more of their hard-earned money, so that mothers can stay with their kids, and that they actually get what they need to raise their kids through hard work and not some government.

Johnson is continuing to take heat from Wisconsinites over his refusal to fight for 1,000 good-paying jobs in his hometown of Oshkosh